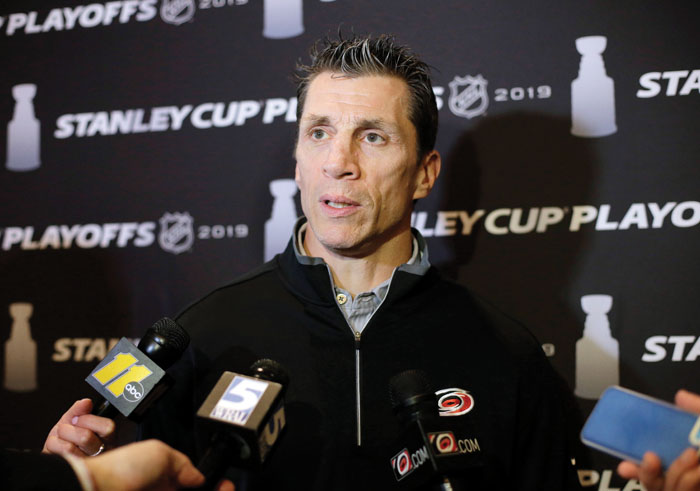 Carolina Hurricanes coach Rod Brind'Amour says ‘fitting the pieces together’ will be key for the Hurricanes. (AP File Photo/Steven Senne)

RALEIGH — The past three seasons have seen the Carolina Hurricanes end a long postseason drought, become an every-year playoff team and win their first division championship in 15 years.

They figured they needed changes to accomplish even more.

Carolina has revamped its goaltending position and other pieces around the core led by young stars Sebastian Aho and Andrei Svechnikov along with top defenseman Jaccob Slavin for the 2021-22 season.

“We have a lot of good players,” said coach Rod Brind’Amour, last year’s Jack Adams Award winner as the NHL’s top coach. “It’s just a matter of fitting the pieces together.”

The Hurricanes’ three-year playoff run is a first for the franchise since relocating to North Carolina from Hartford, Connecticut, in 1997. They have won at least one playoff series each time — reaching the Eastern Conference finals in 2019 — since ending a nine-season playoff drought.

The Hurricanes signed goaltender veterans Antti Raanta and Frederik Andersen. They acquired defenseman Ethan Bear from Edmonton in the Foegele deal. They took a one-year shot on defenseman Tony DeAngelo despite his multiple disciplinary issues, and signed restricted free agent Jesperi Kotkaniemi – the No. 3 overall draft pick in 2018 – away from Montreal.

“That culture is set in stone and so all the new guys coming in are coming into a team that’s well-grounded in who they are and how we play the game,” Slavin said. “They’re not necessarily playing catch-up (in preseason camp) but they’ve kind of got to jump on the ship and move forward with us as we continue to move towards sour goal.”

Some other things to know about the Hurricanes:

The Hurricanes continued locking up their young talent by reaching an eight-year deal in August with Svechnikov, the No. 2 overall draft pick from 2018.

The 21-year-old, who was a restricted free agent, has become a fixture on Carolina’s top line with Aho and Teuvo Teravainen. Both Aho (24) and Teravainen (27) are under contract through the 2023-24 season.

Slavin won last year’s Lady Byng Memorial trophy for sportsmanship and gentlemanly conduct while playing on the top pairing with Hamilton. Brett Pesce and Brady Skjei handled major ice time in the playoffs when Slavin was out with a lower-body injury.

“You see all these guys how they work out, how they practice, what they do on the ice, off the ice,” Raanta said of his new teammates. “It’s just try to match that level and get to their level and bring something to the table every day.”

Brind’Amour said he expected the 21-year-old Kotkaniemi would play on the wing with the Hurricanes’ center depth of Aho, Vincent Trocheck and captain Jordan Staal.

Carolina added two defensemen with offensive upside in the 24-year-old Bear and the 25-year-old DeAngelo after Hamilton signed a seven-year deal with New Jersey.

The DeAngelo signing is a one-year, $1 million gamble on a polarizing player who is one year removed from posting 15 goals and 53 points in a 68 regular-season games.

He was sent home by the New York Rangers last season following an undisclosed incident, went unclaimed by the rest of the league on waivers and had the final season of his contract bought out.

The Hurricanes open the regular season at home against the New York Islanders on Oct. 14 and close at Pittsburgh on April 29. Noteworthy stretches include playing 10 of 13 games on the road in November, playing 16 of 25 games at home after coming out of the Olympics break.