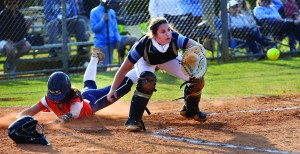 Catawba won a 3-2 battle with Queens on Wednesday.

Lindsay Elmore (Carson) had 19 kills and KK Dowling (West Rowan) had 12 kills and 13 digs for the Royals.

COLLEGE GOLF
Catawba’s women placed third at the King Women’s Invite Golf Tournament.
Catawba was a shot off the lead after carding a 323 on Monday, but fell back following a 328 on Tuesday.

Tusculum, the first round leader, won the event with a total of 627.

Catawba is hosting the Patsy Rendleman Invitational on Monday and Tuesday at the Country Club of Salisbury.

Catawba’s men were 10th out of 12 schools at the King Invitational Men’s Golf Tournament, which wrapped up on Tuesday.  Catawba had rounds of 206 and 311 to post a 617 total in the two-round event.

Riley Smith led the Catawba Indians with two rounds of 71 for a 142 score.

Ranked 19th, Catawba (7-0-1, 3-0) stayed unbeaten with a 1-0 SAC victory over Wingate on Wednesday at the Frock Soccer Complex.

The Indians made that goal hold up over the remaining 30 minutes.

Catawba will be at home again on Saturday, hosting Coker at 7 p.m.

Wingate scored with just under three minutes remaining in the final overtime period to nip Catawba 2-1 in South Atlantic Conference men’s soccer action on Wednesday night at the Frock Soccer Complex. The Bulldogs improve to 3-4-1 overall and 1-2-1 in the SAC. The Catawba Indians are 4-2-2 and 0-2-1.

Against 10 men during the overtime, Wingate broke through in the dying minutes. Florens Van honk redirected a cross from Ricardo Cardozo in the 108th minute for the game-winner. Catawba had played a man down since a second yellow was issued to Gage Bernard in the 89th minute. The yellow was one of eight cards that were shown in the match to go along with 47 fouls.

Wingate took the lead in the 13th minute when Matheus Masukawa scored off a pass from Kobie Vazquez. Catawba equalized on its first shot of the match in the 68th minute. Tom Savigar picked up a loose ball and scored one-on-one against the keeper.

Catawba will host fourth-ranked Coker on Saturday at 4:30 p.m.

The Jaguars were paced by Meredith Antosek who covered the hilly two-mile course in 16:06 to take the individual championship.

The Salisbury Academy boys cross country team ran away with the individual and team titles at the 1st annual Jaguar Invitational.

Abdul Eliwa paced the field and Salisbury Academy  to take the individual title with a time of 13:23. Hampton Reed of Concordia was second, 22 seconds behind Elowa.

The Jaguars finished with a team score of 13. Second-place St. Stephens Lutheran School had a score of 67.