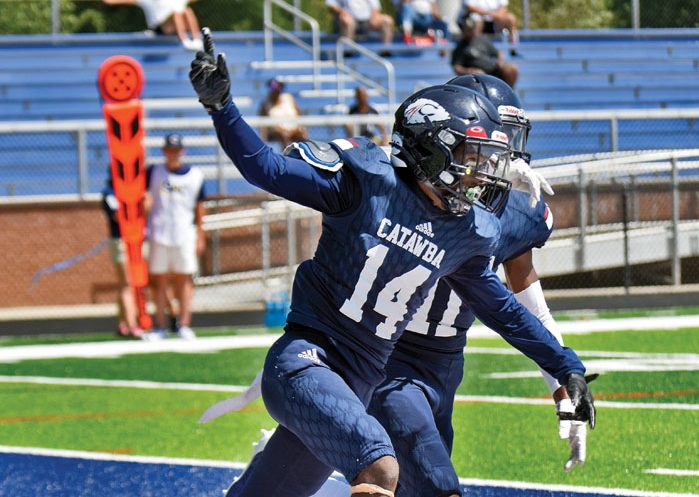 Catawba will have to wait yet another week to see if the Indians can improve on their 3-0 record. File photo by Wayne Hinshaw, for the Salisbury Post

SALISBURY — Due to COVID issues, Catawba’s home football game scheduled for Saturday against Limestone has been postponed and likely will be canceled.

As with the Wingate contest, both teams have games slated for each week throughout the remainder of the season, so a makeup date is unlikely.

Catawba is still set to host Carson-Newman on Oct. 9 at 1 p.m.

Carson’s girls were led by Makayla Borst, third in 22:44, and Camden Corley, fourth in 22:51. Other scorers for the Cougars were Kendall Barbee (7th), Brynn Sokolowski (19th) and Emily Landaverde (20th).

In the boys race, the Raiders rolled to a score of 25 with Grayson Cromer (18:02) finishing second behind Julian and Aaron Jones (18:13) taking third. The other scorers for South were Brooks Hubbard (7th) and Brian Hickman (12th).

In an 8-1 loss to undefeated Lake Norman Charter, Summer Null won at No. 3 singles for Carson.

Salisbury improved to 10-1 overall and 4-0 in the Central Carolina Conference with a 4-1 victory over the Lexington Yellow Jackets on Tuesday.

Carlos Henriquez found Will Webb on the back post to give Salisbury the early lead.

SHS was on the front foot for a large portion of the first half but the Hornets found themselves tied at half after a mental mistake cost them the equalizer.

A refocused team took the field for the second half and defender Luke Graeber continued his assault on the scorebook with an assist to Colin Donaldson on a long throw.

Webb scored his second goal of the night on another cross, this time from Leo Fragoso, to push the lead to 3-1.

Webb flipped the script and crossed a ball onto the feet of freshman David Austin, who finished the scoring.

Salisbury got excellent play from senior Bennett Clark, who played his best match of the season.

“I thought we were strong for large portions of the match,” SHS coach Matt Parrish said. “We had one big mistake in each half but mental mistakes can be cleaned up. If we can do so and keep our mental fortitude for the duration of the match, we will be a tough opponent for anyone.”

Next up for the Hornets is another makeup conference match on Thursday at Thomasville. Game time is 6 p.m.