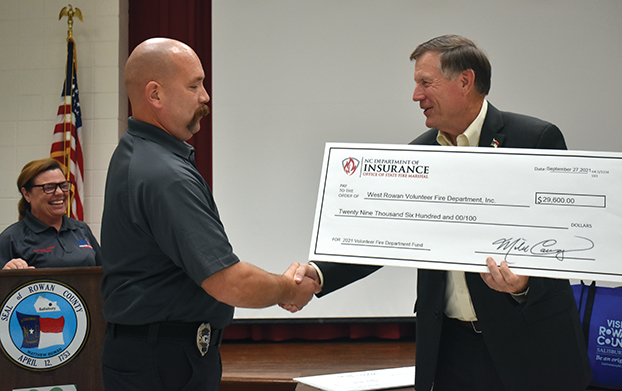 The checks represented $240,221 in total funding that 13 departments in Rowan County received from the Volunteer Fire Department Fund this year.

“To give almost a quarter of a million dollars is a big help to fire departments and people in those fire districts,” Causey said.

The state fund distributed $9.8 million to small departments across the state who primarily rely on volunteers and oftentimes serve rural communities.

“It’s very difficult these days for volunteer fire departments to recruit and to retain and keep volunteers,” Causey said. “We’re trying to do everything we can from the state level to help our volunteer departments.”

Departments who apply for funding are graded automatically based on a point system. The system, Causey said, prioritizes projects that place an emphasis on firefighter safety.

Each fire department matches the grant received dollar-for-dollar, except departments which receive less than $50,000 in municipal funds. Those departments match one dollar for every three dollars of grant funding.

Although fire departments apply for the grants in April and receive funding in May, Causey said he enjoys delivering the ceremonious checks in person because it gives him a chance to connect with fire departments across the state.

“When we do these check presentations, it gives me an opportunity to update these fire chiefs and the fire service in each county about what we’re doing at the Department of Insurance and Office of the State Fire Marshal, any updates on legislation we might be working on,” Causey said. “It also helps me get feedback from them on any issues and concerns and they’re not shy about telling us their concerns.” 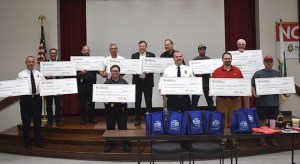 Causey’s visit on Monday was his second time stopping in Rowan County this month. He visited China Grove on Sept. 10 to announce that the China Grove Fire Department improved its ISO rating from a four to a two.

The Rowan-Iredell Volunteer Fire Department on Monday received an oversized check for $30,000 in funding, the most of any Rowan County department and the maximum amount possible.

Located in the northwestern corner of the county, the department serves a rural part of western Rowan and has a mutual aid agreement to provide support to part of Iredell County. The department is among the smallest and least-funded in the county. As a result, it is dependent on the annual grant from the Volunteer Fire Department Fund. The $30,000 grant makes up approximately a third of the department’s $90,000 total yearly budget.

“We rely on the grant very heavily to replace essentially all of our capital needs, turnout gear, SCBAs (self-contained breathing apparatus), a lot of very expensive we wouldn’t be able to purchase and use in our community if we didn’t have this grant,” said Jered Webb, chief of Rowan Iredell Volunteer Fire Department.

With this year’s grant, the department has purchased 10 sets of turnout gear (the personal protective equipment firefighters wear), eight fire hoses and a few other miscellaneous items.

The National Fire Protection Association recommends fire departments replace their gear every 10 years, no matter how much it is used. When gear is not replaced every decade, firefighters may be at a greater risk of contamination or harm when entering a burning building. Since gear is expensive, fire departments often purchase a few sets every year.

“It’s a good feeling to know this money has really replaced turnout gear,” Causey said. “As I heard one fire chief say today, their turnout gear was 17 years old and this is something that needs to be replaced every 10 years.”

The West Rowan Volunteer Fire Department received $29,600 from the Volunteer Fire Department Fund this year, the second most in the county. Assistant Fire Chief Andy Russell said the department is primarily using the money to purchase and replace its air packs. The department’s goal, Russell said, is to have the same type of air packs at each of its four stations to avoid any logistical problems and to be as efficient as possible. 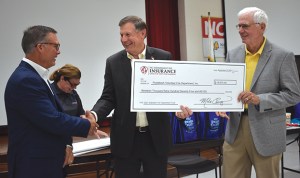 While volunteer fire departments receive funding generated by tax revenue, many of them rely on grants to fill out the remainder of their budgets. Rowan County Board of Commissioners Chair Greg Edds and Vice Chair Jim Greene were in attendance for Causey’s visit. Edds said he is proud of the county’s volunteer fire departments who are “doing more with less” and thanked Causey for providing them the opportunity to apply for funding.