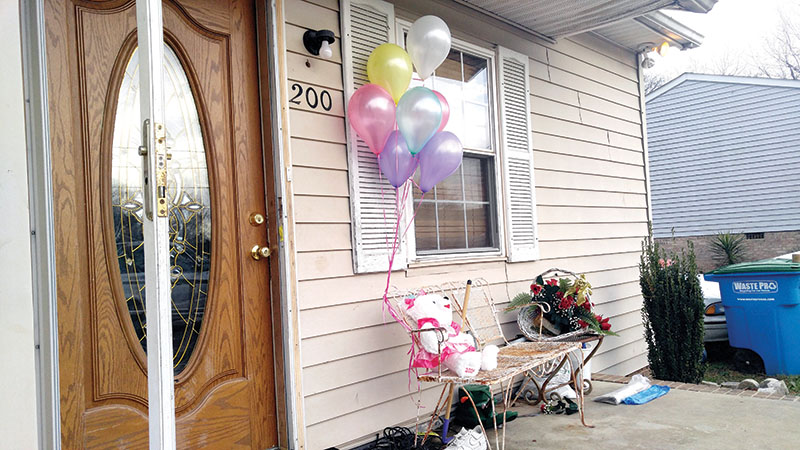 A balloon and bear were left in 2016 on the porch of the Harrel Street home 7-year-old A'yanna Allen was shot and killed on Dec. 4. Shavonne Potts/Salisbury Post

SALISBURY — Police say they have the weapon used in the murder of 7-year-old A’yanna Allen, who was shot and killed Dec. 4, 2016, as she slept in a bedroom she shared with her grandmother.

The weapon, a Chinese-made Norinco SKS 7.62×39 semi-automatic rifle, originally was seized in June 2019 after sheriff’s deputies served a narcotics search warrant at an address on Morgan Road in Gold Hill. It sat in an evidence room for an extended period of time before investigators were able to confirm it was the same weapon used in Allen’s murder.

Confirmation the gun was used in the crime is a significant step in the investigation into Allen’s murder, Crews said.

“We are closer than where we were,” he said.

The 7-year-old died after a barrage of bullets swept through a home on Harrel Street she was sleeping in with her paternal grandmother. The shooting occurred around 4 a.m., which was just hours after someone shot Sharod Raheen Mathis at the now-closed Firewater Restaurant and Lounge off of Innes Street. An autopsy report showed Allen was wounded 20 times by the gunfire.

The two shootings are connected, police say, but the only arrest of note was a 21-year-old woman who was charged with obstructing the case.

Crews said shell casings from a March test fire of the rifle matched ones at the scene of the crime. Maj. John Sifford of the Rowan Sheriff’s Office said narcotics investigations revealed the rifle may have been used in the Salisbury shooting. The Sheriff’s Office provided that information to police.

Sifford said the man the gun was seized from is facing federal narcotics charges and obtained the weapon through a trade for drugs.

Allen’s murder is one of the most prominent cold cases for the Salisbury Police Department. During a National Day of Remembrance video posted by the city of Salisbury this weekend, Police Chief Jerry Stokes said Allen’s murder “must be solved for the victim, the family and friends and for all of us.”

“It is by justice that we can feel safe and resilient as a community,” Stokes said.

People with information and unwilling to “say something” are standing in the way of justice, he said.

“Standing up for what’s right can be hard, but we as a community need to support each other,” he said.

People with information about Allen’s murder can contact Salisbury Police at 704-638-5333 or call Salisbury-Rowan Crime Stoppers at 1-866-639-5245. Tips may be submitted online at tips.salisburyrowancrimestoppers.org.