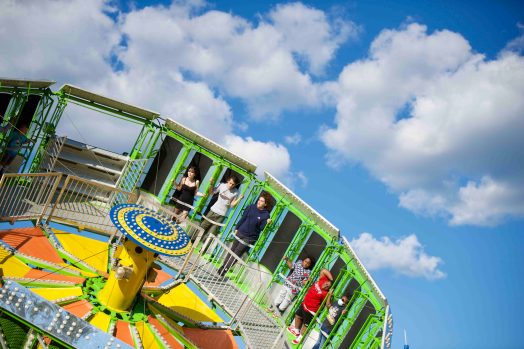 Carl Blankenship/Salisbury Post - There are more than 20 rides at the fair this year. A handful were not set up this year because of concerns about close contact. 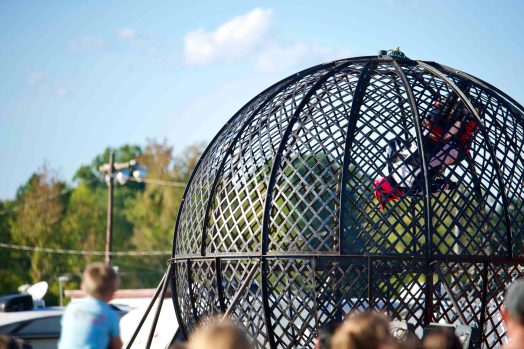 Carl Blankenship/Salisbury Post - A performer taking a dirt bike for a loop. 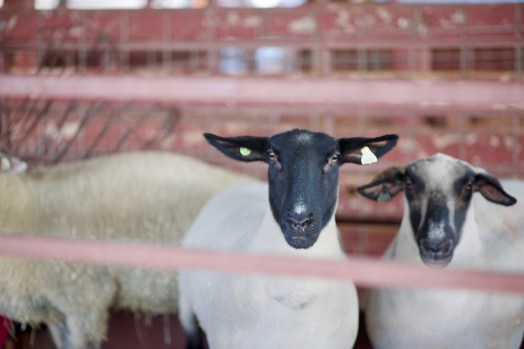 Carl Blankenship/Salisbury Post - Sheep on display in the barn. There is no petting zoo this year. 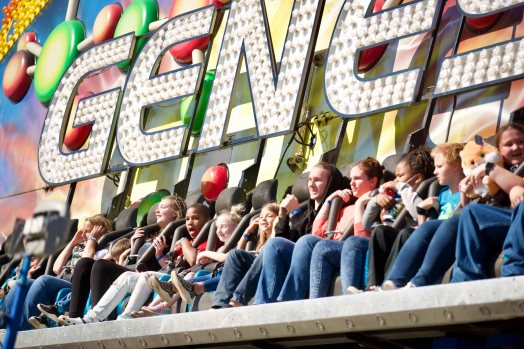 Carl Blankenship/Salisbury Post - Riders in motion. There were lines at some rides by mid afternoon on Saturday. 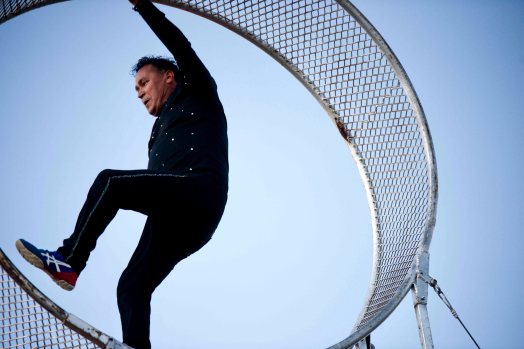 Carl Blankenship/Salisbury Post - A circus performer in a space wheel rotating through the air.

SALISBURY — The Rowan County Fair opened its doors for the first time in two years this weekend, and it also marked a first for some families.

The Sains, a family of five, usually enjoys its fair festivities in Cabarrus County, but it was cancelled this year. Because the Sains live on the Rowan County side of Kannapolis, they decided to travel to Salisbury this year. Andrew Sain had not been to the Rowan fair since he was a kid. His wife Michele has never been.

Andrew said his favorite part of the fair is watching his kids laugh and have a good time. Michele said she is happy there is a fair to go to this year, but the family has stayed busy otherwise by traveling and camping together.

Grace Sain, a third grader, said her favorite part of the fair is the rides, and she rode every attraction she was able to. Her favorite was the rotating cylinder, which moves rapidly at an angle. None of the rides scared her.

The Rowan County Fair was canceled last year due to the pandemic. It came back this year with some precautions. Masks were recommended. Signs told visitors to stay one cow length apart, which is about 6 feet. Fair manager Johnny Love said the cow joke got some laughs.

There are hand sanitizer stations at every ride and almost every vendor booth as well. The fair’s barn is open and has livestock on display, ranging from rabbits to dairy cows, but there is no petting zoo this year.

The fair also has moved all of its indoor vendors outside to take advantage of the outdoor ventilation. A few rides were not included this year because they were deemed too close contact. There were still more than 20 rides for fair-goers to choose from.

Love noted there are a lot of COVID-19 infections in Rowan County. He said the fair is aware of that and takes it seriously.

“We want everybody to be safe,” Love said.

Otherwise, the fair is back in force. Love said the lines at rides are always a good sign for attendance. Attendance was up from 2019 on opening night on Friday, but the fair has a week to go before it closes on Saturday.

“I think people are ready to get out and enjoy some things,” Love said.

Love missed the experience. He said there are people with the carnival, vendors and agriculture entrants he only sees once a year.

“It’s always good to sit down, talk to the, find out how their family is doing and get together,” Love said. “The fair is definitely a family event.”