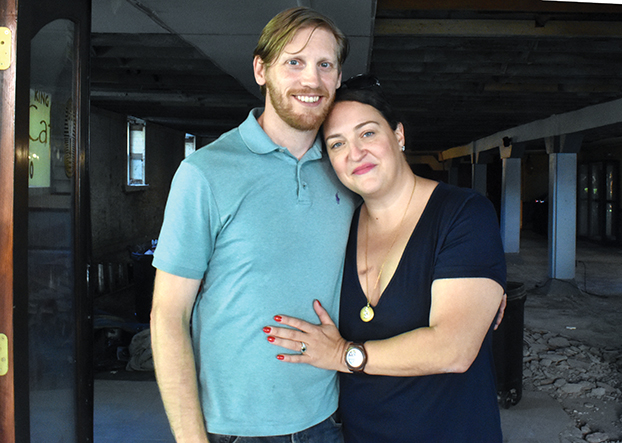 Robert Ring and Samantha Haspel are planning to bring two separate nightlife concepts to downtown Salisbury. The White Rabbit Cocktail Parlour and Wonderland Barcade will be located in what used to be King Tut's Hookah Lounge. Ben Stansell/Salisbury Post

SALISBURY — There were moments when Samantha Haspel was undergoing treatment for blood cancer that she wasn’t sure if she was going to live or die.

“It was touch and go for a while there,” Haspel said.

Haspel was diagnosed with the life threatening disease on March 10, 2018, just a few months after she’d started a new relationship with Robert Ring. The couple was living in the High Point area at the time, but soon moved to Salisbury to be closer to Haspel’s family.

While Haspel battled cancer, she and Ring dared to discuss what they might do together when, and if, she recovered. Those conversations continued when she was cured in March 2019, after they married months later and into a global pandemic.

A shared love for cocktail bars, nostalgic arcade games and Salisbury eventually led them to create what will soon be The White Rabbit Cocktail Parlour and Wonderland Barcade. The couple is currently working to bring the two separate concepts to life under one roof in the former home of King Tut’s Hookah Lounge at 5 Easy St.

“I want to create something where people walk in and their jaws hit the floor and they go, ‘I can’t believe this is Salisbury,’” Haspel said.

The couple is currently having the entire space renovated. In the end, a wall will bisect the building with The White Rabbit Cocktail Parlour primarily on the left side and Wonderland Barcade on the right.

Despite the immediate association that one might make, neither of the ventures are named for Alice in Wonderland. The cocktail bar’s name is actually an homage to Haspel’s father, who passed away in 2016.

“His name is Peter and his first grandchild called him rabbit and it stuck through all seven grandchildren, so my dad became ‘The Rabbit,’” Haspel said.

The concept for The White Rabbit Cocktail Parlour is one Haspel and Ring developed while visiting cocktail bars across the globe, including the world-renowned Bar Trench in Japan. While the space is currently a construction zone, the couple envisions a low-lit bar with a “surrealist Art Deco theme” perfect for quiet conversations. Not exactly a speakeasy, the cocktail bar will host an occasional live performance and will have a patio where people can sip outside. In addition to the bar chairs and spaced out seats and tables, The White Rabbit will have a partitioned space that can be rented out for parties or larger gatherings.

Instead of buying an unnecessary amount of cocktail glasses to get a decent price, Haspel and Ring have been slowly purchasing secondhand chalices from Goodwill stores across the country. The result is a mismatched but “exquisite” collection of beverage containers that’ll soon be filled with cocktails both familiar and foreign.

Whether its a classic cocktail “with a twist” or an entirely new creation, Haspel and Ring said each drink will be labor-intensive and will be crafted using fresh, local and surprising ingredients.

A small menu of appetizers and desserts will be offered at the cocktail bar. Haspel will be responsible for curating the bar’s culinary offerings, which will include upscale menu items like roasted bone marrow, chicken liver mousse and other delicacies scarcely found outside of a few of Salisbury’s finest dining establishments.

“We’re forging ahead with the things that we love to eat that we think other people will,” Haspel said. “We’re incorporating a lot of flavors that people around here probably have not tried, more exotic fruits, vegetables, things like that that’ll also be parts of our cocktails.” 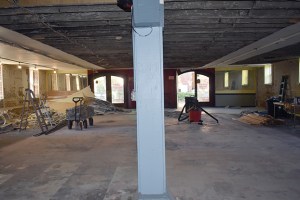 Although it may be tough to imagine now, the left side of the room will be transformed into an arcade filled bar and the right side will be turned into an upscale cocktail bar. Ben Stansell/Salisbury Post

While The White Rabbit is named for Haspel’s father, the Wonderland Barcade on the other side of the building is named after one of her favorite childhood haunts. Haspel’s family has roots in Salisbury, but she was raised in New York and enjoyed spending afternoons on Coney Island sticking coins into arcade machines. Haspel can’t remember the exact name of the arcade where she battled Pac-Man, but she thinks “Wonderland” was in its title.

Filled with games from the 80s and 90s, the Wonderland Barcade will be an ode to nostalgia.

“This is not going to be modern games,” Haspel said. “This’ll all be classic games from our childhood — skeeball, claw machines both for adults and kids, Donkey Kong, all the good stuff.” 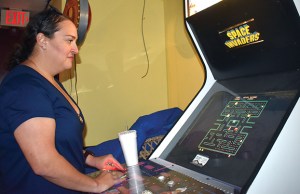 Samantha Haspel plays Pac-Man on the first arcade machine inside what will soon be Wonderland Barcade. The nostalgic arcade will offer beer and wine, but the cocktails will be served next door at The White Rabbit Cocktail Parlour. Ben Stansell/Salisbury Post

Haspel and Ring want The White Rabbit Cocktail Parlour and Wonderland Barcade cool places to hangout, but they also want them to be great places to work.

“Part of our plan is that, in bringing in staff, all of our staff will have the potential to become owners and managers,” Haspel said. “Our goal is to have our staff take over entire running of the bar within five years and we beleive the best way to do that is to make them partners in our business. There really is an opportunity for us to help other people find a career possibly.”

They also want their businesses to be a positive influence on the community.

“Our goal is, if we’re doing well, what kind of things can we set up to raise money for others? We are really looking for ways to, in being successful as a business, give back to the community at large,” Haspel said. “We really want to make Salisbury a place friendly to everyone.”

Above all else, Haspel and Ring desire for The White Rabbit Cocktail Parlour and Wonderland Arcade to be a destination for people both in Salisbury and outside of the area.

“We’re hoping to open something so fabulous that people come from other places to come see it and also that it pushes the bounds of what people here are willing to build,” said Haspel, also a board member for Downtown Salisbury Inc. “We were inspired by La Cava and Carpe Vinum and what they’ve been able to sustain as businesses and we see an opportunity and a potential there that we think will be good for us and the city.”

Haspel and Ring are aiming to open The White Rabbit Cocktail Parlour and Wonderland Barcade by Christmastime or in January, but they expect supply chain issues to make that difficult.

To keep up with progress as Haspel and Ring work to bring their visions to life, you can follow thewhiterabbitcocktailparlour and wonderland barcade on Facebook and Instagram.