College football roundup: ‘The curse is broken’ as Wolfpack stuns No. 9 Clemson 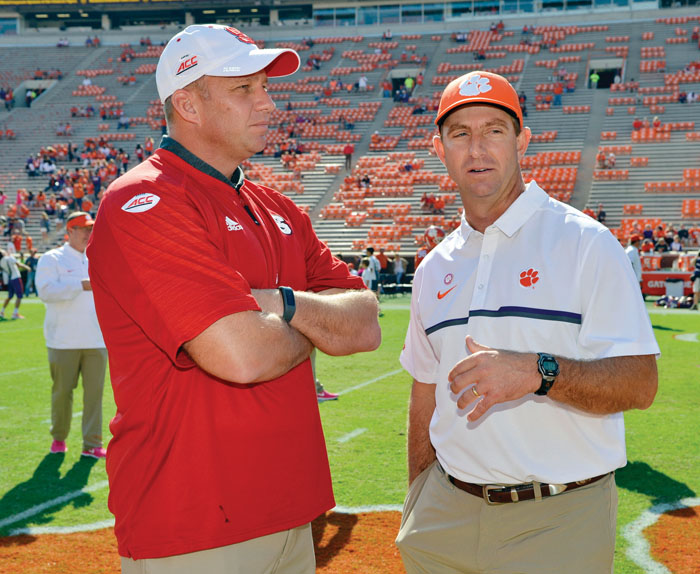 RALEIGH (AP) — Clemson’s final pass had barely hit the ground when North Carolina State’s sideline began charging toward the field to celebrate, followed closely by red-clad Wolfpack fans pouring in to join them from all directions.

The Wolfpack’s long run of frustration in these marquee games is over. And the ninth-ranked Tigers’ shot of returning to the College Football Playoff could be, too.

N.C. State forced D.J. Uiagalelei into a fourth-down incompletion to seal a 27-21 win against the Tigers on Saturday. It’s an outcome that shakes up the Atlantic Coast Conference race while also dealing a huge blow to the Tigers’ playoff hopes in the long term behind yet another woeful offensive performance to start the year.

N.C. State (3-1, 1-0 ACC) had lost eight straight and 15 of 16 meetings to the Tigers, which included at least one painfully close loss that fueled a bit of Murphy’s Law-level pessimism — locals know it by an expletive-featuring nickname — among Wolfpack fans.

No more, at least not for ninth-year coach Dave Doeren after his first win against a top-10 team.

“The curse is broken, N.C. State fans, finally,” Doeren chuckled. “I’ve been here nine years and seen a lot of crazy stuff. And people have talked about it and didn’t believe it. But I’ve got to tell you: I think it was real, and it’s not there anymore. So we can move on now and be happy about that.”

Devin Leary threw for four touchdowns, including the winning 22-yard pass to Devin Carter — who made a twisting adjustment to the back-shoulder throw and got both knees down inside the back right corner of the end zone for the lead to start the second OT.

Then Uiagagelei slightly overthrew Justyn Ross near the goal line on fourth down to start the celebration of N.C. State’s first win in the series since 2011.

“I kind of caught with everyone storming the field,” Leary said. “I was looking for my mom, looking for my dad. I eventually got to them, they were still in the crowd. But the first person I was able to hug and just celebrate with was Coach Doeren.”

It was a brutal day for the Tigers (2-2, 1-1), who now have a second loss to make it an unlikely climb to extend their streak of making every year of the playoff since the first edition in 2014. It also is a big setback in the Atlantic Division for the six-time league champions, while injuries mounted with linebacker James Skalski, defensive tackle Bryan Bresee and running back Will Shipley being knocked from the game.

The Tigers had 214 total yards, with Uiagalelei throwing for 111 yards and two scores.

“You know what? That comes with the territory because the expectation and the standard at Clemson and who we are, we’re not meeting it. It’s just that simple.”

Clemson: The Tigers came in having 17 points in two games against Bowl Subdivision opponents, including failing to reach the end zone in their season-opening loss to No. 2 Georgia. Nothing in this game alleviated any of those offensive concerns, with the Tigers struggling to block up front to consistently sustain drives. Clemson finished with seven three-and-outs.

“I think the main thing was we couldn’t get into a rhythm,” Uiagalelei said.

N.C. State: The Wolfpack controlled play most of the way, running 96 plays to Clemson’s 49 by extending drives and converting 11 of 21 third downs. Yet Doeren’s team had to overcome plenty of adversity, too, from a penalty-filled day (11 for 105) to three missed field goals from normally reliable kicker Christopher Dunn — including him pulling a 39-yarder to end regulation wide left. It still added up to the biggest win of Doeren’s Wolfpack tenure.

The Tigers started the year at No. 3 but are set to take a big tumble after suffering a second September loss. The Wolfpack could earn an AP Top 25 ranking with this big win.

Spector had 19 tackles for the injury-depleted Tigers defense, while Emezie had 14 catches for 116 yards with a first-quarter TD for the Wolfpack.

N.C. State: The Wolfpack’s schedule dips back out of league play with a home game against Louisiana Tech next Saturday.

Freshman backup quarterback Mason Garcia entered for a play and ran for a 3-yard touchdown following Mitchell’s score. Holton Ahlers added a 60-yard touchdown pass to give ECU (2-2) a 24-14 lead with 2:31 left before halftime. In the fourth quarter for Charleston Southern (1-2), Jack Chambers ran for an 8-yard touchdown, and then he added a 2-yard TD pass to Geoffrey Wall.

GREENSBORO (AP) — Kashon Baker ran for 139 yards and a touchdown on 12 carries and Jazir Staton recovered a blocked punt for a score as North Carolina A&T rolled to a 37-14 victory over North Carolina Central in nonconference play on Saturday.

The Aggies (1-2) jumped out to a 10-0 lead in the first quarter on a 39-yard field goal by Andrew Brown and a 47-yard scoring run by Baker. After the teams traded field goals, Jacob Roberts blocked a punt by Juan Velarde that was recovered by Staton in the end zone to push NC A&T’s lead to 20-3. The Aggies were in command after Jalen Fowler fired a 24-yard scoring strike to Elijah Bowick with 1 second left before halftime.

Brown added his third field goal of the game in the third quarter and Bayshul Tuten scored on a 4-yard run in the fourth to cap the Aggies’ scoring. Fowler finished 18-of-28 passing for 161 yards.
Davius Richard connected with Ryan McDaniel for a 77-yard TD in the fourth quarter for the Eagles (2-2). Richard completed 21 of 35 passses for 225 yards with a pick. He also led the Eagles with 43 yards rushing on seven carries.

DAVIDSON (AP) — Louis Colosimo had a 24-yard touchdown pass to Eli Turner Jr. with 2:34 left to help Davidson stop San Diego. Facing third-and-14, Colosimo found Turner across the middle before running it in for the score. The brief scoring drive for the Wildcats (2-1, 1-0 Pioneer Football League) followed a Torreros drive in which they turned it over on downs deep in their own territory with three minutes left.

ELON (AP) — Running back DreSean Kendrick faded a 29-yard pass to Cole Blackman for a fourth-quarter touchdown to give William & Mary a 10-point lead and allow the Tribe to hold off a second-half charge by Elon in the Colonial Athletic Association.

Darius Wilson ran 46 yards for a first-quarter touchdown and tossed a six-yard scoring pass to Lachlan Pitts to start the second quarter to put William & Mary on top, 21-0 16 minutes into the game. The Phoenix, who missed a pair of field goal attempts in the first half, scored on Davis Cheek’s 17-yard pass to Kortez Weeks, then Cole Coleman picked off a Wilson pass deep in Tribe territory and Jaylan Thomas ran in from six-yards out to make it 21-14 at intermission.

Wilson capped a six-play, 70-yard drive to start the third quarter by hitting Pitts from 10 yards out.

Elon got a 43-yard field goal by Skyler Davis and Cheek found Bryson Daughtry from 19 yards out to cut the Tribe’s lead to 27-24.