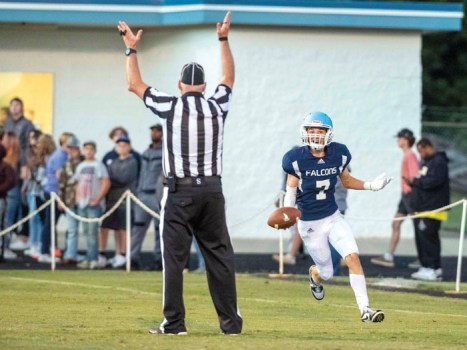 West Rowan’s Paxton Greene (7) scores a touchdown last season and will look for the end zone early and often this year. File photo by JON C LAKEY / FOR THE SALISBURY POST. 9/24/21, Mt Ulla,NC. 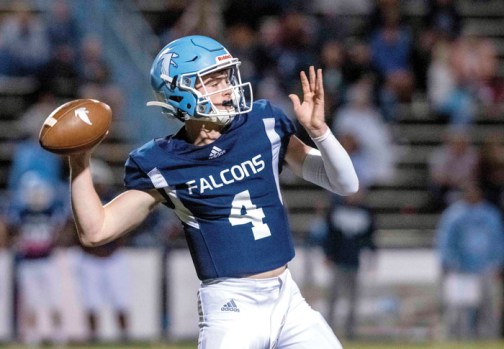 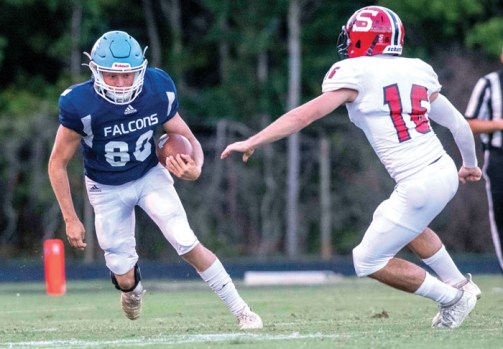 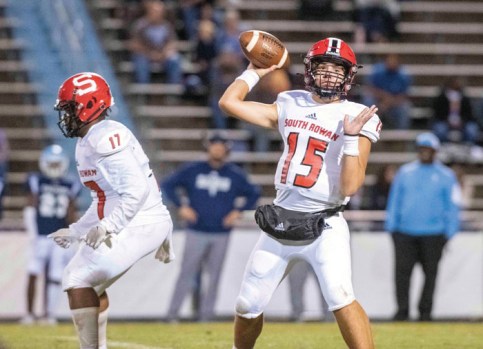 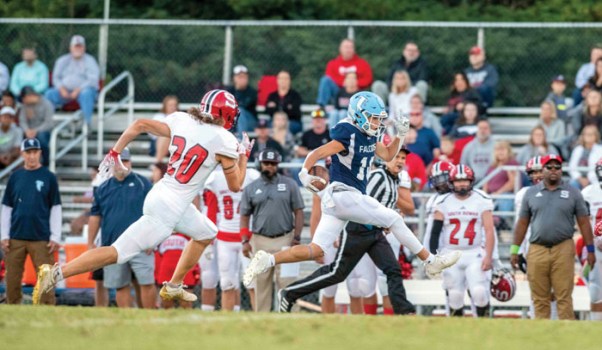 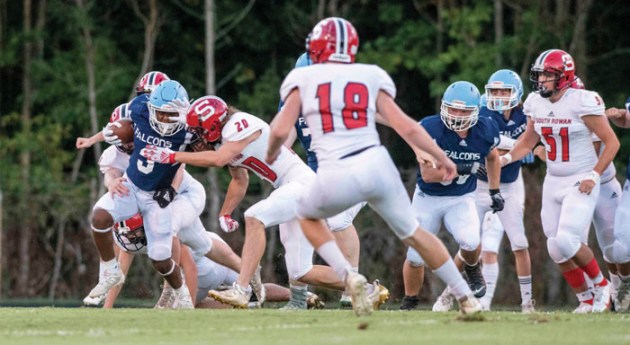 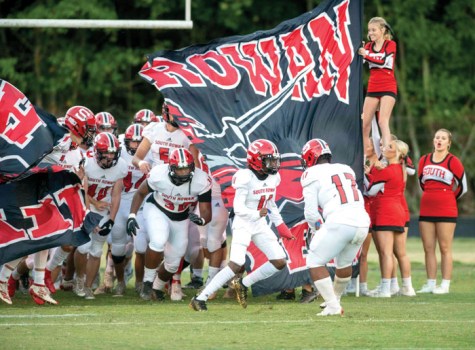 MOUNT ULLA — The only problem West Rowan had Friday night was too much of a good thing.

For the second consecutive week, the Falcons turned an SPC showdown into a layup drill — operating with machine-like efficiency in a 55-16 win over visiting South Rowan.

“I challenged them before the game to be the team we should be,” winning coach Louis Kraft said after West (3-2, 2-0) won its third straight and prevailed at home for the first time. “And to beat them how we should beat them.”

West racked up 497 yards total offense on a night when prolific wide receiver Peter Williams-Simpson did not make a reception. Instead, the Falcons turned to their supporting cast and unearthed several award-worthy performances.

“They’re gonna double-team Peter because they know what he’s done,” said teammate Garrett Fesperman. “We adjusted by pounding it, running the ball hard to the opposite side and getting some other receivers involved.”

None shone brighter than Fesperman, a sure-handed senior who grabbed six passes for 153 yards and a third-quarter touchdown. But there were lots of fingerprints on this triumph, including quarterback Noah Loeblein —  who passed for 234 yards and four TD’s — and the backfield tandem of Akin Robinson (8 carries/150 yards/2 touchdowns) and Cayleb Brawley (13 carries/78 yards/1 TD).

“They focused on (Williams-Simpson) and that opened it up for all these other guys,” said right guard Braydon Haglan. “He was still involved, but in a different way. You can’t say enough about him, great player, great person.”

“Pete is a selfless dude,” added Fesperman. “He wasn’t getting the ball, but you didn’t hear him complain one time.”

First-year South coach Chris Walsh found the good side of bad after the Raiders (1-5, 0-2) dropped their fifth straight game. “Our defensive staff went off the stats,” he said. “They put a good game-plan together during the week. But our boys are just getting used to winning and competing to the end. They fought hard.”

It didn’t take the Falcons long to mark their territory. In the first period alone, Loeblein threw for 129 yards and connected with Ben Sweet and Paxton Greene on touchdown passes. By halftime it was 28-0, courtesy of Robinson’s 30-yard TD burst and Brawley’s 6-yard scoot on a left-side pitchout.

“We opened it up tonight,” said Loeblein, the county leader with 13 touchdown passes. “We definitely have a better running game than last year — and a more experienced offensive line. Everyone came up big and made plays.”

Kraft was quick to praise his senior signal-caller and an O-line that routinely provided about four seconds of protection.

West made a few more in the second half, driving for touchdowns on three straight possessions in the third quarter. Then came a fumble recovery by Abe Davis, which led to Robinson’s 57-yard sprint down the left sideline for another score. South got on the board with 4:25 remaining in the third period — when do-it-all receiver Trae Rucker caught an over-the-middle spiral from sophomore QB Jamie Klassette, oiled his way out of a scrum in the West secondary and bolted 60 yards into the end zone. Klassette completed 14 of 21 attempts for 176 yards.

“He’s getting better by the week,” Walsh acknowledged. “He’s a young guy and we’re just getting him used to seeing a bunch of different things. I couldn’t be more proud of him.”

“I think we played a really good complete game,” noted defensive end Qadree Ziyad, a beefy 225-pound senior. “We’ve got to keep doing that. At the beginning of the season we were struggling. But we’ve got some dogs on every level of this defense. We’ve just got to learn to play together, like we did tonight.”

NOTES: Paxton Greene (2), Ben Sweet and Fesperman all caught TD passes. Loeblein also ran for a 2-yard score late in the third quarter. … A running clock took effect after West went up 55-8 with 11:09 to play. South closed the scoring when Rucker (86 yards receiving, 26 rushing) ran 8 yards for a touchdown with about five-and-a-half minutes remaining. … Four Raiders suffered injuries — defensive lineman Max Bradshaw, linebacker Jed Waller, running back Landon Richards and wideout Bronson Hunt. … The Raiders host Central Cabarrus (0-4, 0-1) next Friday while West entertains Northwest Cabarrus (3-3, 2-0) for a share of the conference lead. The Trojans have won three straight. … A pre-game moment of silence was observed for Scott Young, the former West coach who would have turned 50 on Sept. 23.