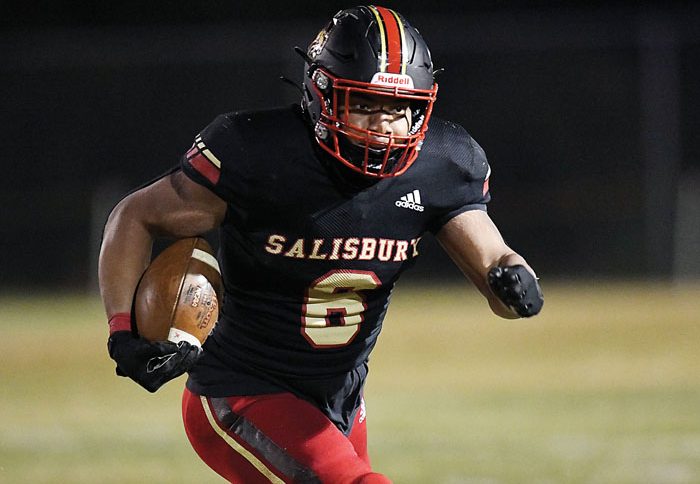 Ranked second in 2A by MaxPreps and 24th in the state for all classifications, the Hornets (5-0, 2-0) had the Green Dragons buried 55-6 by halftime.

“We were sloppy and didn’t execute on our first possession,” Hinson said. “But then we settled in and started to play.”

JyMikaah Wells, who scored five touchdowns and rushed for 148 yards, broke a long run for Salisbury’s first TD. Mike Geter and Marcus Cook connected on a long pass play for the second one and the rout was on.

Geter scored two more rushing TDs. He rushed for 64 yards and threw for 120.

West Davidson (0-4, 0-1) got on the board in the second quarter when Salisbury had a bad snap on a punt. The Green Dragons started a possession inside the Salisbury 10 and were able to score.

“Our defense played well, did what they were supposed to do,” Hinson said. “We won like we should have.”

Salisbury’s second-half touchdowns came on the ground, with Johnai Rippy putting the ball in the end zone twice. He had 66 yards on seven carries.

Hinson wasn’t happy with the penalty yardage, but other than that, he wasn’t complaining about the Hornets’ latest effort.

“We’ve just got to keep preparing hard every week and we need to get better at something every day,”  Hinson said. “That’s on us as coaches as much as it’s own the players. I’ve told them they’re not necessarily getting ready for this week’s game or for next week’s. What we’re preparing for is the playoffs.”

THOMASVILLE — North Rowan knew it would be a tough game at Thomasville’s Cushwa Stadium, but it turned out to be more difficult than anyone had imagined.

Thomasville battered the Cavaliers 59-18. The Bulldogs were able to match North’s speed and they were larger in the trenches.

“Thomasville was the much more physical team tonight, just very big and tough inside,” North coach Nygel Pearson said. “We struggled to run the ball early. Jae-mian Morrow ran hard, but we still were behind the chains some.”

Thomasville grabbed an 8-0 lead midway through the first quarter and expanded that lead to 30-0 with three TDs and three 2-point conversions during a dominating, six-minute stretch in the second quarter.

North (3-2, 1-1) scored shortly before halftime on Jeremiah Alford’s 21-yard pass to Amari McArthur, his seventh TD catch, and went to the break down 30-6.

“We were hoping that touchdown at the end of the half would get us going a little bit,” Pearson said.

It didn’t. The Bulldogs (4-1, 1-1) scored quickly in the third quarter to regain momentum, and a blocked punt for a touchdown made it a 45-6 game.

Alford scored a rushing TD to make it 45-12 with 4:16 left in the third quarter, but comeback hopes only lasted a few seconds. Thomasville returned the ensuing kickoff for a touchdown.

“They scored two touchdowns on special teams, and those hurt,” Pearson said.

When Thomasville scored on the ground with 5:45 left to play, the Bulldogs led 59-12 to trigger a running clock. A 42-point lead is the magic number.

Alford, a freshman who has accounted for 16 touchdowns, had another short TD burst to close the scoring.

‘I can’t say enough good things about him,” Pearson said. “He plays hard and he’s only going to get better.”

North will look to regroup before it plays at East Davidson next week.

“We’re not stopping anyone,” Pearson said. “First down and second down tonight we did a decent job, but on third down we just ouldn’t get off the field.”

KANNAPOLIS — Not much is going East Rowan’s way.

The Mustangs blocked a Northwest Cabarrus field goal in the third quarter, but the ball was still behind the line of scrimmage and was live. The Trojans alertly scooped the ball up and ran for a touchdown.

With the help of that unusual play in the South Piedmont Conference contest, Northwest beat the Mustangs 33-7 and won its third straight game.

It was all Northwest early, as the Trojans got off to another fast start. Sophomore quarterback Alex Walker threw three touchdown passes in a four-minute span in the first quarter. He hit Tevin Tucker twice for scores, and also found Tru Sierra.

Walker’s 71-yard connection with Tucker, his 13th TD pass of the season, gave the Trojans a 20-0 lead.

East moved the ball in the second quarter, but couldn’t score. It was still 20-0 at halftime.

The touchdown on the blocked field bumped the Trojans’ lead to 26-0.

East broke through for its third TD of the season (and first passing TD) when Aiden Schenck connected with Landon Jones on a 34-yard play.

Ray Jay Waters had a rushing TD for the Trojans to close the scoring.

Walker passed for 200-plus yards, with most of his production in the first half. East stepped up its pass rush in the second half, with  Dominick Dale making several plays for the Mustangs.

East is off next week and goes to Central Cabarrus on Oct. 8.

But the rest of the Central Piedmont Conference contest belonged to East Forsyth. The Eagles, who did everything right, including a kickoff return touchdown, humbled previously unbeaten Davie 52-21.

Davie (4-1, 1-1) got back to 21-14 when Alex Summers threw a 12-yard TD pass to Zaharee Maddox, but the visitors reestablished control in the later stages of the first half and took a 38-14 lead to the break.

Ranked 13th in the state by MaxPreps, Davie made it 38-21 on Summers’ 16-yard TD pass to Zymere Hudson, but 11th-ranked East Forsyth finished strong.

Reagan is next for Davie, and Reagan beat East Forsyth. It’s a stout league.

Lake Norman led 14-7 at halftime, picked off two passes and beat the Wonders for the first time in school history.

Lake Norman controlled the game with an option-based running game that piled up yards but not a lot of points. Lake Norman only threw the ball twice. The Wildcats converted on a fourth-and-1 sweep late in the game and were able to kill the clock.

Elijah Lawson had a 5-yard rushing TD for the Wonders in the second quarter.

Xavier Chambers scored the second TD on a 29-yard completion from Joey Vanover.