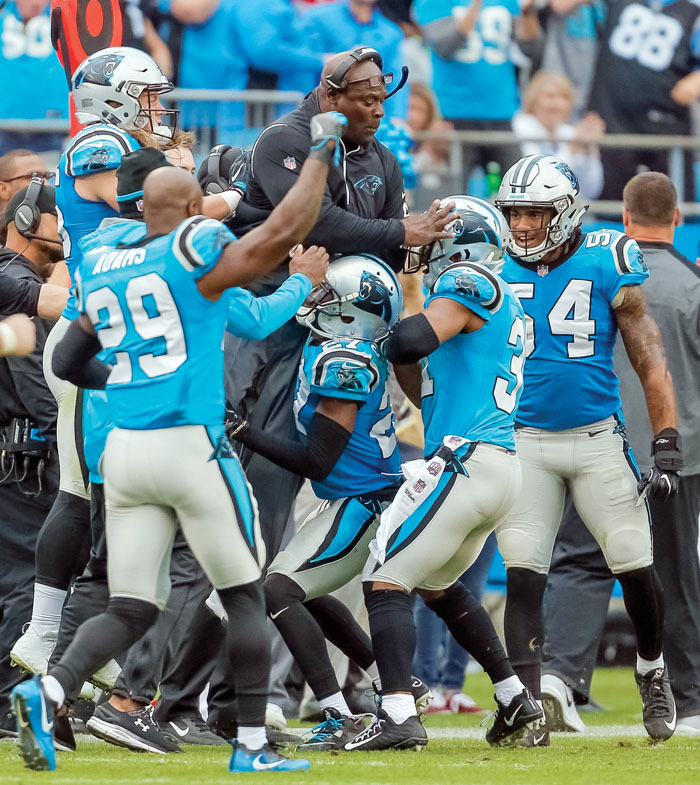 HOUSTON (AP) — The Carolina Panthers will face a rookie quarterback making his first NFL start for the second time in three games tonight against Davis Mills and the Houston Texans.

Carolina (2-0) opened the season with a 19-14 victory over the New York Jets in the debut of Zach Wilson, the second overall pick in this year’s draft.

Now they’ll meet Mills, a third-round selection who’s filling in for the Texans (1-1) indefinitely after Tyrod Taylor injured his hamstring last weekend and was placed on injured reserve.

Mills threw for 102 yards with a touchdown and an interception in the second half of a loss to the Browns after Taylor was injured.

Carolina picked off Wilson once and sacked him six times in the opener. But this defense wasn’t only tough against the rookie, the Panthers had an even better performance against Jameis Winston and the Saints. Carolina intercepted him twice and sacked him four times in a 26-7 win a week after the seven-year veteran threw five TD passes.

“I wouldn’t lie, right now we are exceeding where I thought we could be and it’s surprising to me,” Carolina outside linebacker Haason Reddick said. “But it’s just a testament to the work that we put in during training camp and OTAs. Getting here, jelling with each other, bonding, getting to know each other and everybody just committing to one goal out there.”

Houston offensive coordinator Tim Kelly interrupted a reporter before he could finish asking about the unit.

“They’re fast,” he said. “They’re fast and they run to the ball. At every level, they’ve got guys that can fly … you feel their team speed when you watch them play.”

Kelly likes the progress Mills has made since joining the team and expects him to improve this week after practicing with the first team.

“Davis has done a good job since he got here coming in and putting himself in a position to go out and hopefully make that transition seamlessly,” Kelly said. “We’re going to still do what we can to make sure we’re putting him in a spot to be successful.”

The Texans have made running the ball their top offensive priority this season after ranking 31st in the NFL in yards rushing last season. With Mills making his first start, Houston knows establishing the run will be even more important.

“We’re going to try to help him out running the ball, making it a lot less stressful for him as a rookie,” running back David Johnson said. “I was there, everybody was there. The best thing that you can have is a great veteran group that we have, and then guys who you can lean on to talk to about it.”

The Texans ran for 160 yards in the opener, but will need to bounce back Thursday after running for just 82 yards Sunday.

The Panthers added Reddick this offseason to help take some pressure off defensive end Brian Burns — and the strategy has worked. Reddick has three sacks and Burns has two as the Panthers have 10 sacks through two games.

Facing a rookie in Mills, expect defensive coordinator Phil Snow to bring some elaborate blitz packages. That plan worked against Wilson in the season opener.

Safety Justin Reid is off to a great start to lead Houston’s defense this season. The fourth-year player had an interception and forced a fumble against the Browns and is tied for the NFL lead with two interceptions this season after also getting one in Houston’s win over Jacksonville in the opener.

“He can do a lot of things well,” defensive coordinator Lovie Smith said.

The Panthers will get cornerback A.J. Bouye back from a two-game suspension. He will be used as a nickel back alongside starting cornerbacks Donte Jackson and rookie Jaycee Horn.

Cornerback was one of the team’s biggest concerns last year as the Panthers struggled to get off the field on third downs. But Horn, the No. 8 pick in the draft, has been strong early and Jackson has taken his game to a different level, excelling at run defense as well as coverage. Bouye will only add more depth to a talented secondary.

Carolina has been dominant in the first half of games this season, outscoring its opponents 33-0 and outgaining them 572-172.

However, the Panthers have shown a tendency to let up in the second half, nearly wasting strong first-half showings by allowing the Jets and Saints back into the games.

“In the second half, offensively, we just continue to kind of have that lull, especially when we have a lead,” Panthers coach Matt Rhule said. “We just have to learn how to be aggressive but still be smart.”