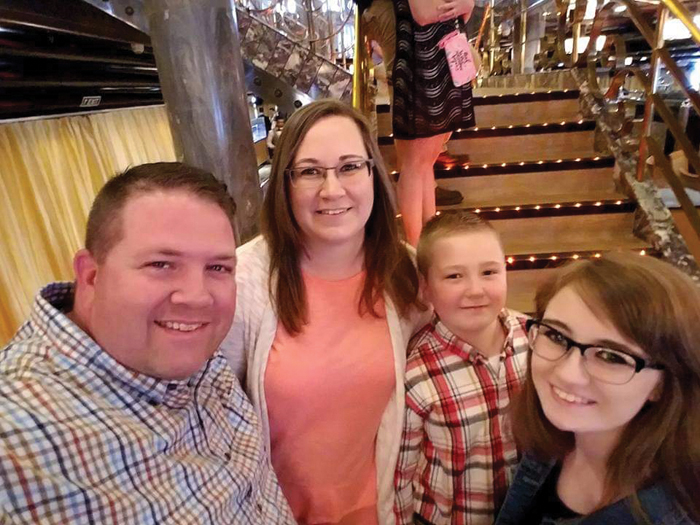 SALISBURY — The Rowan County Sheriff’s Office will hold a fundraiser today for an investigator who’s been hospitalized with COVID-19 for more than a month.

Brian Benfield will be the beneficiary of a hotdog and sausage sandwich fundraiser from 7:30 a.m. until 2 p.m. in the parking lot beside the Rowan County Sheriff’s Office, located at the corner of North Main and Liberty streets. All money generated from the fundraiser will help Benfield pay for medical bills related to COVID-19.

Today’s fundraiser will charge $3 for sausage sandwiches, $2.50 for hotdogs, $1 for drinks and $5 for two hotdogs and a drink.

Brian is a graduate of A.L. Brown High School who lives in Stanly County with wife Shannon and kids. He’s worked for the Rowan County Sheriff’s Office since the mid-2000s and “loves knowing that he makes a difference,” Shannon said. These days, he works on a lot of child abuse cases.

While Shannon and Brian both have health insurance, she’s sure the costs will be astronomical after a five-week hospital stay and an expected move to a long-term acute care facility.

“I can’t even imagine. I don’t even want to imagine,” Shannon said.

He tested positive on Aug. 15 and was admitted into the hospital two days later. Brian’s dad, Ned, drove his son to an urgent care after he experienced breathing problems, but he was quickly transferred to Atrium Health Cabarrus for further treatment.

“And he’s been there ever since,” said Shannon, who also developed a severe case of COVID-19 and recovered faster than her husband.

The couple’s son also tested positive for COVID-19. Their daughter went to stay with a friend as soon as symptoms emerged.

Brian is on a ventilator and hasn’t been able to talk for weeks, but his condition improved recently. He’s now writing notes, smiling back during video calls and stood for a short time on Tuesday.

Shannon is counting her blessings because he’s expected to survive. With ties to Cabarrus, Stanly and Rowan, the Benfields have people in three counties praying for them.

“It’s only by the grace of God that’s he has pulled through it,” she said. “He’s made such great progress and I give all the glory to God. We’ve witnessed a miracle. We were told he shouldn’t be here as sick as he was.”

Brian and Shannon have known each other since they were teenagers and been married for more than 20 years. They first met at Carolina Mall when she was singing Christmas carols. They persevered through the fierce rivalry between A.L. Brown and Concord High School, where Shannon graduated, and married in their early 20s.

She’s already planning a date night for when he’s recovered. Top choices include Rick’s Restaurant in Denton or Razzoo’s Cajun Cafe in Concord.

She grateful for the generosity of the Rowan County Sheriff’s Office, which made taking paid leave easy in addition to the fundraiser.

“When I saw they were going to do that, I just cried because it’s another blessing,” Shannon said about the fundraiser. “We weren’t expecting it all all. Most employers would not have done that.”

After experiencing COVID-19 firsthand, she’s got a message for the general public. Everyone should quarantine when they’re supposed to and take the coronavirus seriously. She’s also thinking about getting vaccinated.

“I was one that did not want to be vaccinated,” she said. “You wonder, with the vaccines, would they have helped him from being on a ventilator? Would the symptoms have been as severe? You don’t know who to trust.”

The delta variant of COVID-19 is the culprit for the current surge in cases across the country and in North Carolina. Data from the Centers for Disease Control and Prevention show almost 100% of cases in the country are the delta variant, which was first identified in December in India.

The delta variant is more contagious and may cause more severe illness than previous variants in unvaccinated people, according to the CDC. Fully vaccinated people can get COVID-19, but they appear to spread the virus for a shorter period of time. Vaccines are effective in preventing hospitalization and death, the N.C. Department of Health and Human Services says.

To find a location to be vaccinated for COVID-19, visit vaccines.gov.