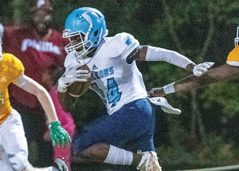 MOUNT ULLA — One of the best catches West Rowan football coach Louis Kraft ever saw didn’t happen on a Sunday, a Saturday, or even a Friday.

“Peter Williams-Simpson freshman year in a Thursday jayvee game,” Kraft said with a smile. “West versus Davie. Unbelievable. Pete goes up to make a catch and I swear his feet were at the defensive back’s head.”

So the Falcons knew early on what Williams-Simpson, who is now flourishing as a junior wideout, was capable of.

But the road from unlimited jayvee potential to unlimited varsity production had more than its share of potholes and detours.

“I think we always knew what he could bring to the table eventually,” Kraft said. “With Pete, it was never a matter of if, it was a matter of when.”

The biggest obstacle Williams-Simpson had to overcome was a knee injury he suffered in the summer of 2020, prior to his sophomore year.

He would not have been able to play at all in the fall of 2020, but when COVID delayed that season until the spring, Williams-Simpson made it back and was able to contribute. He debuted  with a 61-yard touchdown catch in an April win at home against Carson.

“I think it really helped that I continued to come to practice with the team and learn even when I couldn’t play,” Williams-Simpson said. “It got me ready for the next season.”

That next season is happening now, and Williams-Simpson has been a caped superhero.

When he had seven catches for 79 yards against North Rowan, well … that was his bad game.

He’s posted well over 100 receiving yards against Davie, Mooresville and Carson. He set career highs with 166 yards and three touchdowns against the Cougars in Friday’s 49-14 victory.

Williams-Simpson has a chance to take the receiving triple crown in Rowan County, even though the competition includes North’s Amari McArthur. Williams-Simpson holds a comfortable lead in receptions (24 to 14) and a slim lead in touchdown catches (7 to 6). McArthur, who averages an insane 38.4 yards per catch, has piled up 538 receiving yards, while Williams-Simpson has 524. It should be quite a battle the rest of the way.

“Don’t get me wrong, Pete was happy to score three touchdowns Friday, but he would have been just as happy if a teammate had scored three, and that’s because we won,” Kraft said. “That’s who he is. One of the best people we’ve got.”

Like McArthur, Williams-Simpson is a pretty big guy who can out-sprint little guys. Kraft lays out large uniform pants for him, as he is 6-foot-2, 170 pounds. At last June’s North Piedmont Conference Track and Field Championships, Williams-Simpson was clocked in 23.91 seconds in the 200 meters and took first place.

That speed/size combination makes him a serious problem for opponents, even though he’s still learning the finer points of fakes and running pass routes.

“Most of my touchdowns have been on verticals, just running by people,” Williams-Simpson said. “But there was one touchdown against Carson where I made a few tacklers miss. I’m working on a lot of things, and I understand how important blocking is. I want to make blocks that help our running backs do what they want to do because they help me do the things I want to do.”

The scoring against Carson began with a Noah Loeblein-to-Williams-Simpson aerial. The play covered 80 yards.  West executed even though the Cougars knew that was the thing they had to try to take away. But that’s easier said than done.

“When you catch an 80-yard touchdown, the first thing you do is thank the o-line because they had to a great job protecting Noah,” Williams-Simpson said. “And Noah throws some great balls. We’ve got a good connection.”

That connection has been solid enough that Williams-Simpson has caught seven of Loeblein’s nine touchdown passes. His other two scores against Carson were a 24-yard play shortly before halftime for a 27-7 lead and a third-quarter 50-yarder that made it 42-7 and extinguished any fire the visitors had left.

South Rowan (1-4, 0-1 SPC) visits Mount Ulla on Friday and will be taking on a West team that has improved immensely since Week 1.

“Against Carson, I thought we put our best foot forward on both offense and defense for the first time,” Kraft said.