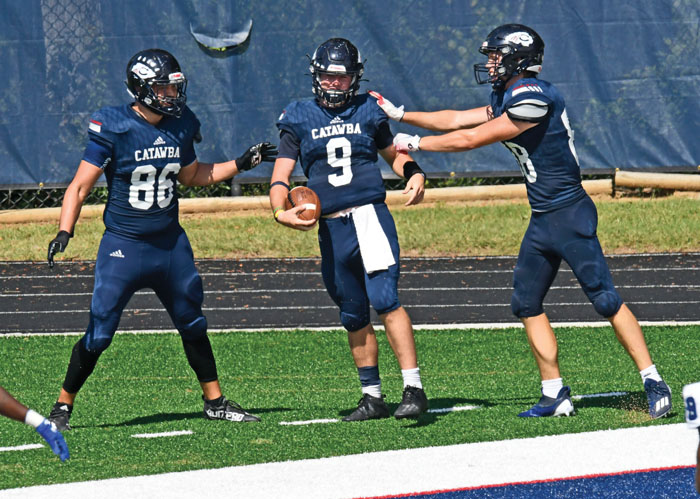 SALISBURY — If you haven’t noticed, Wingate has gotten awfully good at football.

Last week, the Bulldogs wrecked Carson-Newman, which once ruled the South Atlantic Conference, and did it in Jefferson City, Tenn. Carson-Newman managed a field goal in the first quarter and nothing in the last three. The final was 25-3.

Wingate (3-0, 1-0) is ranked 13th in Division II as it awaits a Saturday night visit from Catawba. Kickoff is at 6 p.m. at Irwin Belk Stadium. This will be Catawba’s conference opener.

After some lean years, Catawba (3-0) is off to an exciting start and fans are understandably thrilled, but Wingate will be a different level opponent than the Indians faced in Erskine, Winston-Salem State or Barton.

There was a time when the Catawba Indians routinely pounded Wingate into the ground, but those days are long gone. Wingate has won the last four meetings and 12 of the last 15.

Even the two really good teams Catawba has fielded in recent years — 2015 (9-3) and 2017 (9-2) — fell to Wingate. Catawba’s only recent success against Wingate under head coach Curtis Walker came unexpectedly in 2016. But that was a weird season. Catawba lost when you were sure the Indians would win, and they won when you were certain they’d lose.

Wingate, coached for the last 21 seasons by Joe Reich, played reasonably close to a perfect game to smash Carson-Newman. The Bulldogs didn’t turn it over, veteran QB Shaw Crocker threw for 238 yards, and the Bulldogs ran the ball well enough to keep the heat off Crocker, who was sacked only once.  Defensively, Wingate held Carson-Newman to under 100 rushing yards and forced the Eagles to throw the ball 17 times (for a meager 50 yards), about 17 more than they wanted to. Carson-Newman was 2-for-12 converting third downs.

Catawba played a solid second half against Barton. The Indians will need two halves like that to compete at Wingate.

Catawba’s offensive strength has been the running game, and the Indians lead the SAC in that category. QB Ken Avent III ranks third in the SAC in rushing with 93 yards per game, while freshman running back Jyrea Martin is fourth. That means the offensive line has been really good.

Defensively, Catawba has given up quite a few yards, but not many points. The Indians basically allow two TDs per game and rank second in the SAC (behind Wingate) as far as fewest points allowed.

When it comes to special teams, Catawba punter/kicker Clayton Crile has been about as good as it gets.

It’s interesting that the schools list different all-time records for the series. Wingate was a junior college for many years and starts counting its games with Catawba with the 1988 season, the season that Wingate joined the SAC.

Catawba counts the four games played between the schools in the 1920s — Catawba won three of the four— and has the Indians leading the series 20-17.

Either way it’s gotten close. The teams have split the 16 meetings in Salisbury since 1988. Catawba holds a 9-8 edge at Wingate.

There’s some wonderful history in the series.

Wingate beat Catawba 61-55 in 1993, with the teams combining for 116 points and 1,286 yards. That game contributed several entries to the Catawba record book.

In 2001, shortly after 9/11 and on a day when very few college teams played, Catawba traveled to Wingate and beat the Bulldogs 12-0 behind a lot of defense and freshman quarterback Luke Samples.

In 2010, Brandon Bunn turned in Catawba’s biggest receiving day ever in a 35-28 win at Wingate. He accounted for 247 receiving yards and four touchdowns.