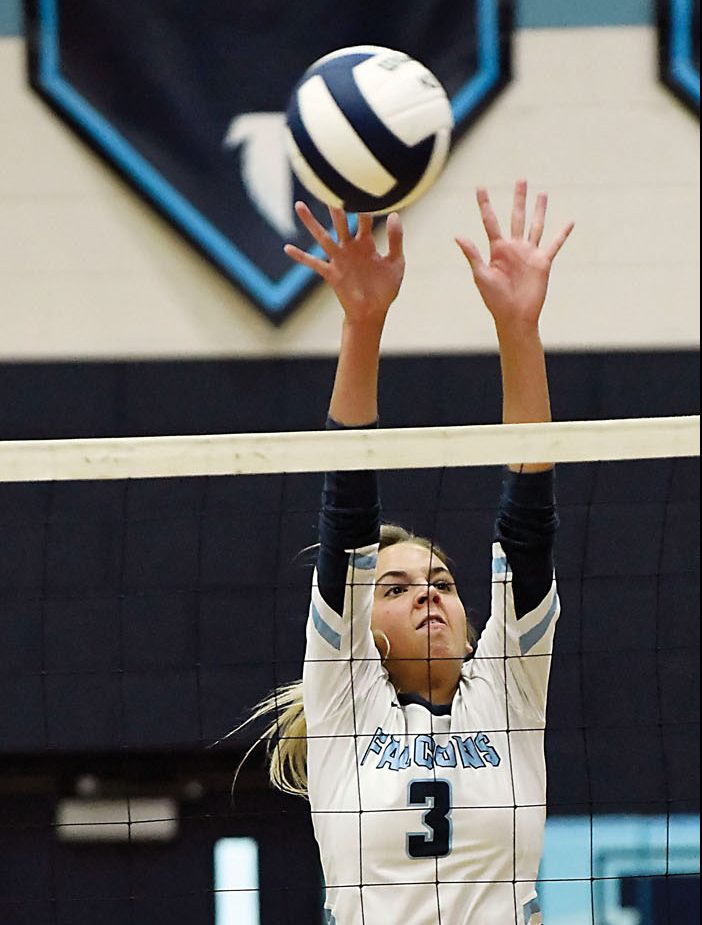 Ashlee Ennis had 195 kills as an undersized hitter last season. She also led the Falcons in aces and was second in digs. File photo by Wayne Hinshaw, for the Salisbury Post

It was a birthday win for current West and former South coach Jan Dowling.

“We made very few errors in the first set, came out hitting well and clicking on all cylinders,” Dowling said. “We didn’t play as well after that, got out of sync a little bit, but South had something to do with that. That’s a solid team.”

It was West’s 13th straight victory against Rowan opponents and kept the Falcons (14-2, 7-0) on top in the South Piedmont Conference. West leads Lake Norman Charter (a 3-1 winner at Carson) by one game and the Raiders (10-3, 5-2) by two at the halfway point in the race.

West had an unusually good blocking day with Emma Clarke getting six. Kelcie Love had three, and Noe Gaeta had two.

Love and Ashlee Ennis had nine kills each. Clarke had eight. Maia Gaeta had six.

“Anytime, you’ve got two with 20 digs that’s a good day,” Dowling said. “They were all over the place.”

Clarke and Noe Gaeta had two aces each.

Cameron Black had seven kills for South, while Avery Welch had six. Leah Rymer had 13 assists.

Dowling received  a yellow card during some heated action that took place in front of the biggest crowd some of the younger players had performed in front of.

“Some of the girls were nervous seeing that many people in the stands, and the team got a little emotional about the yellow card, with it being my birthday and everything,” Dowling said with a laugh. “But it wasn’t my first and I can promise that it won’t be my last.”

East Rowan got its third SPC win by sweeping Northwest Cabarrus on the road on Tuesday.

Sophia Blackledge had nine kills and 10 digs for the Falcons.  Kate Gregory had five kills. Abigail Evenden had four kills and nine digs. Ava Gusler had 11 digs and four aces. Brinley Batts had 19 digs and 17 assists.

Grayson Steedley had a hat trick for the Raiders. Ozzy Pulido scored twice, and Tony Mata had a goal.

With a Wellness Work Day scheduled for Oct. 14, Carson and East have moved their football games for that week.

The varsity game will be played on Wednesday, Oct. 13, at Carson. It will be Senior Night for players, band and cheerleaders.

The jayvee teams will play at East Rowan on Tuesday, Oct. 12.

Soccer, golf and tennis matches were generally wiped out by the rain on Tuesday.

The South Atlantic Conference announced that Catawba midfielder Sydney Jimmo is the offensive player of the week.

Jimmo, a sophomore from Vermont, had a big week for Catawba as she led the Indians to  wins over Chowan (5-1) and Anderson (4-0). She scored a hat trick with two assists in the Chowan victory and then added two goals and an assist against Anderson.

GARS members played a the Revival at the Crescent Golf Club.