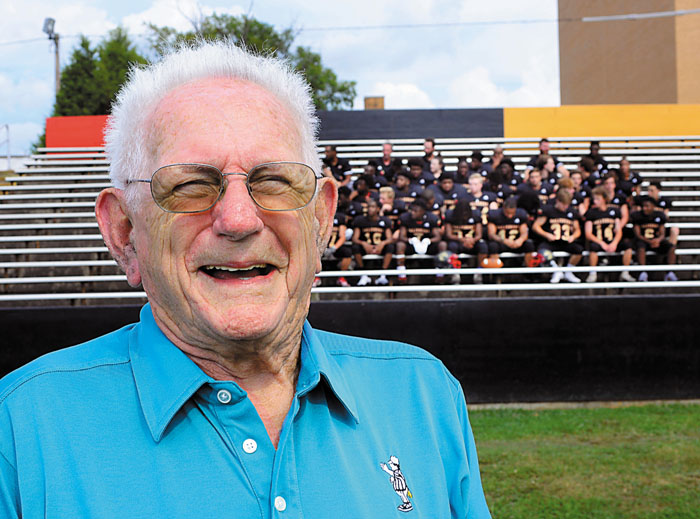 Rodney Callaway played in the first game in the Salisbury stadium. The 2019 Salisbury High team is seated behind him waiting for a team photo. Callaway died on Sept. 12 at the age of 90. photo by Wayne Hinshaw, for the Salisbury Post

SALISBURY — Rodney Arlin Callaway told the Post once he’d live forever if his heart was as good as his legs.

Callaway’s legs allowed him to make a pretty good run at forever. He passed away at 90 on Sept. 12.

His impact on Rowan County and high school football in North Carolina was substantial.

In a Forrest Gump-like gallop through life, Callaway witnessed a lot and accomplished a lot. He was an athlete, a college student, an Air Force staff sergeant, an electronics expert, a husband and father, a master plumber, a heating contractor, a Sunday school teacher, a volunteer fireman, a wine connoisseur, a funeral honor guardsman, a football official and a supervisor of officials.

In his days at Boyden High School, Callaway wore a leather helmet and played end for legendary coach Bill Ludwig. Those were 4 yards and a cloud of dust Friday nights.

Callaway was the last survivor of a group of Boyden Yellow Jackets who stunned unbeaten Charlotte Central 6-0 in 1949 in the first game played under the lights at the venue that would officially be dedicated to Coach Ludwig in 1968. Charlotte Central’s Wildcats had more size, more speed and more subs, but Boyden had Jerry Barger playing fullback, and Boyden won. In a stadium designed to hold 3,500, estimated attendance on that historic rainy night was 5,500.

Callaway was primarily a blocker in Ludwig’s old-fashioned single-wing offense,  but he caught the surprise touchdown pass in the monumental 7-6 homecoming victory against R.J. Reynolds later in that 1949 season. Running for his life from a fearsome Reynolds safety, he turned a short flip into a 50-yard scoring play.

He was good enough to get a chance to play at the University of South Carolina. He got to tackle Barger when South Carolina played Duke, but a broken arm soon curtailed his playing career and a letter from Uncle Sam changed his life. He was in Air Force ROTC during his brief stay at South Carolina, and in the summer of 1952, he headed to San Antonio for Air Force enlistment and training.

He married Julia Ann Cohen on Dec. 23, 1952. They would have three daughters.

Callaway participated in extensive electronics training in the Air Force. At Eglin Air Force Base in Florida, he was part of the Electronics Maintenance Division and was one of the 12 airmen trained to maintain the Air Force’s first air-to-air guided missile. The Hughes AIM-4 Falcon entered service with the Air Force in 1956.

After the Air Force, Calloway spent decades in the plumbing and heating trade and on a long list of civic projects.

In 1968, Callaway officiated his first high school football game and found something that he was born to do.

He was usually the umpire, and he was on the field on Fridays for 22 years. The five Concord-A.L. Brown games he handled provided lifelong memories. So did the three state championship games.

He led clinics and became a supervisor of officials for the North State Athletic Association. He was a supervisor for 29 years, and there’s no telling how many young officials he helped get started.

In 1993, he was chosen the outstanding official in North Carolina by the National Federation of State High School Associations.

In 2011, he was recognized with the Dick Knox Distinguished Service Award by the North Carolina High School Athletic Officials Association.

Even after a stroke and a heart bypass, he rarely slowed down. He couldn’t wait for that next high school game.

“Some people prefer pro or college football, but it’s high school football that I love,” he told the Post a few years ago. “There’s no doubt the game kept me young.”