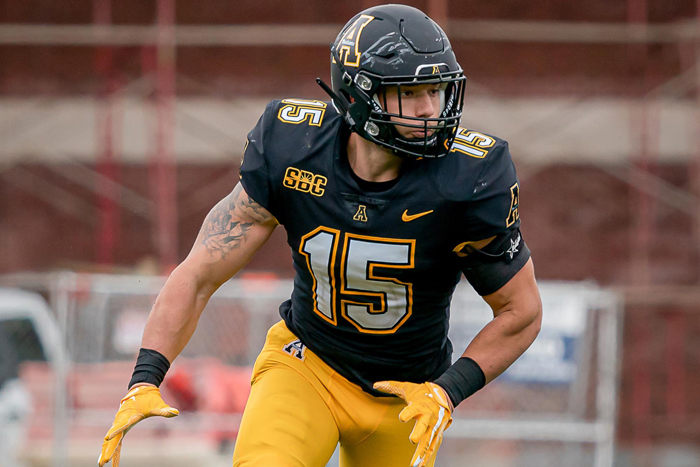 T.D. Roof had a 90-yard interception return to set up a third-quarter touchdown. Photo courtesy of Appalachian State University

BOONE — Chase Brice ran for one touchdown and passed for another to lead Appalachian State to a 44-10 win over in-state FCS foe Elon on Saturday.

Brice opened the scoring on a 47-yard hookup with Malik Williams to open the scoring and his 1-yard plunge early in the third quarter pushed the lead to 20-3.

Camerun Peoples had two touchdown runs in the second half, Anderson Castle added one in the closing minute and Chandler Stanton kicked his third field goal as the Mountaineers (2-1) pulled away.

Appalachian State finished with 528 yards of offense with Brice completing 19 of 25 passes for 293 yards.

DURHAM (AP) — Duke scored three touchdowns in the first quarter and did all its scoring in the first half, then held off a Northwestern comeback to earn a 30-23 win.

The Blue Devils were efficient on both sides of the ball early on, scoring on six of its first eight possessions behind Gunnar Holmberg, who completed 31 of 44 passes for a career-high 314 yards and a touchdown. And the defense forced Northwestern to punt or into a turnover on its first seven drives.

The Wildcats (1-2) didn’t score until late in the second quarter, following a change at quarterback. Starter Hunter Johnson threw three interceptions and was relieved by Andrew Marty, who orchestrated a quick scoring drive that covered 75 yards in just six plays. Northwestern never quite caught up with Duke (2-1).

Duke’s defense did something it hadn’t done in seven years by forcing five turnovers.

Samford 42, Western Carolina 37: DeMarcus Ware ran for 118 yards and three touchdowns, including the deciding score with 6:28 left in the game as Samford held off a second-half comeback by Western Carolina to earn a 42-37 victory in the Southern Conference opener for both teams Saturday.

The Catamounts (0-3) scored four straight touchdowns, two on touchdown passes from Rogan Wells and a third when Western Carolina sacked Welch in the end zone early in the third quarter. Wells found Calvin Jones with a 52-yard score with 4:23 left to get within a touchdown of the lead. Wells was 25 of 56 for Western Carolina and had three touchdowns to go with three interceptions.

Carter engineered three first-quarter touchdown drives to give the Spartans a 21-0 lead, and after Kevin Caldwell threw a 71-yard touchdown pass to Brandon Joyner to get the Vikings on the board, Norfolk scored four more touchdowns to build a 49-7 lead after three quarters.

Collier burst over the left side from the 2, scoring the game-winner with 1:41 left on the clock. N.C. Central held Winston-Salem without a first down and took over on downs with under a minute left.

Four seconds into the fourth quarter, Collier had barreled over the middle from the one to knot the score at 13-13.

Winston-Salem had taken a 13-6 lead into the final period on a pair of Jobanni Esparza field goals and a 19-yard touchdown pass from Cameron Lewis to Antjuan Collins.

ATLANTA (AP) — Darren Grainger completed just six passes, but two of them went for touchdowns — including a go-ahead 34-yarder to Ja’Cyais Credle in the third quarter — to help Georgia State turn back Charlotte 20-9 in nonconference play.

Charlotte took a 7-0 lead on Chris Reynolds’ 36-yard scoring strike to Elijah Spencer midway through the second quarter. After the two teams traded punts, Grainger needed just two plays to pull Georgia State even — hooking up with Jamari Thrash for a 35-yard TD at the 4:03 mark to forge a 7-7 halftime tie.

The 49ers (2-1) used a safety to take a 9-7 lead, but Grainger put Georgia State in front for good with his scoring strike to Credle with 5:06 left in the third quarter. Jamyest Williams capped the scoring for the Panthers with a 13-yard TD run in the final quarter.

Grainger finished with 139 yards on 12 pass attempts with one interception for Georgia State. Destin Coates rushed for 83 yards on just four carries. Tucker Gregg ran for 76 yards on 22 carries, Williams carried seven times for 73 and Grainger added 64 on 16 totes as the Panthers piled up 298 of their 437 total yards on the ground.