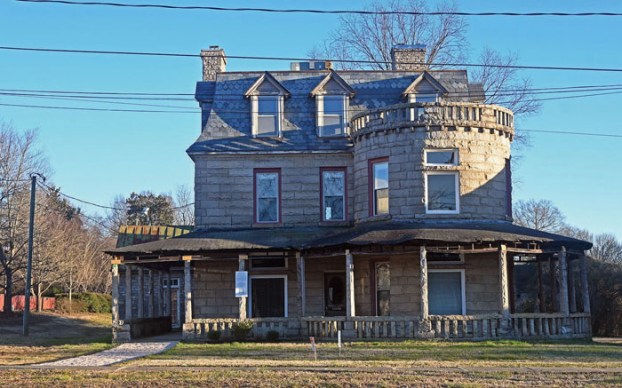 Natalie Anderson/Salisbury Post — The Napolean Bonaparte McCanless House, a second-empire style home built in 1897, located at 619 S. Main St., will be on this year’s OctoberTour.

SALISBURY — The 46th annual OctoberTour scheduled for Oct. 9 and 10 will return to in-person tours of local historic landmarks and require proof of vaccination or a recent negative COVID-19 test for participation.

The Historic Salisbury Foundation modified this year’s event as cases rose in Rowan County. The foundation asks for proof of vaccination or a negative COVID-19 test when picking up tickets within 72 hours before the tour begins. Pickup is at the Historic Salisbury Station at 215 Depot St. Online sales end at noon on Oct. 8, but tickets can still be purchased in person via credit card only.

HSF Executive Director Sada Stewart Troutman thanked foundation staff for altering OctoberTour plans “at the last minute” and for following the guidance from the HSF Board of Trustees.

“Historic Salisbury Foundation is grateful to be able to have worked with health care organizations to make a decision about holding OctoberTour in a way that works to protect our homeowners, volunteers and tour attendees while still enjoying the excitement of the weekend,” Stewart Troutman told the Post.

This year’s event will involve six in-person house tours on Oct. 9 and 10. Houses include the Leo Wallace Sr. house at 301 West Fisher St., the Fulton-Mock-Blackmer house at 112 South Fulton St., the Walter F. McCanless house at 204 Confederate Ave., the “Rock House” at 225 South Fulton St., the Napoleon Bonaparte McCanless house at 619 South Main St., and the Dr. Josephus Hall house at 226 South Jackson St. Masks are required while inside the homes.

Additionally, HSF will host three virtual house tours of the T.W. Borland House, the Moses Corriher House and the Peacock-Fowler House. Virtual house tours and the virtual auction will be released on octobertour.com at 6 p.m. on Oct. 8 and run until Oct. 10.

Because of COVID-19 concerns, HSF has canceled the Bank Street Festival, Restoration and Design Expo, Ghost Guild presentation and trolley rides. All tickets purchased and vendors registered will be refunded upon request. Alternatively, the contribution can be considered a tax-deductible donation to the HSF.

The event will still feature the Patron’s Party on Oct. 8, the traditional kickoff for the OctoberTour weekend. The dinner will be held at the home of Bill and Shari Graham from 6:30 p.m. to 11 p.m.

Additionally, the Pedal Factory will lead a biking cruise around historic downtown Salisbury on Oct. 10 beginning at 11 a.m. The tour will include all of the homes featured this year, and riders should expect 4-5 miles with an option to extend toward Spencer after seeing the homes downtown. Vintage bikes and attire is encouraged for the ride.

The silent auction is also still on for 6 p.m. on Oct. 8, 9 and 10. Bids will be made on a selection of items from the Ice House Architectural Salvage Warehouse. Items up for bid will be on display at the train station.

The Wallace house features stucco walls, red clay tile roof, curved parapets and overhanging eaves and constructed “mission style,” a counterpart to the colonial revival style that was popular when the house was built in 1912. The Blackmer house was completed in the 1820s in a Italianate style for local merchant John Fulton and his family and served as a boarding place for young women attending the early Salisbury Female Academy.

The Walter F. McCanless house was completed in 1929 and features a renaissance revival style with iron-embedded brick, enclosed terrace and carved stone window boxes. The “Rock House” features a craftsman bungalow style constructed in 1913 during the last decade of the art and crafts era that began in England.

The Napolean Bonaparte McCanless house was built in 1897 from locally quarried granite and features granite balustrades and a detached original kitchen house. The Hall house, considered Salisbury’s landmark residence, was constructed in 1820 with a federal style frame house used by the girls’ department of Salisbury Academy.

“The foundation is looking forward to seeing everyone tour some of Salisbury’s finest houses and beautiful examples of historic preservation,” Stewart Troutman said.

To purchase a ticket, visit octobertour.com/tickets. General admission price is $30. Members pay $25. Groups of 10 or more also pay $25 per person. Children between the ages of 6-10 are charged $10.