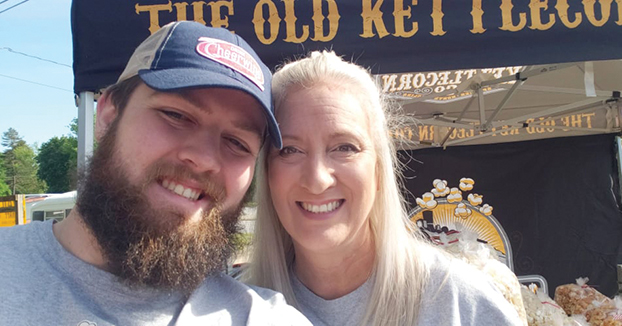 Coleman Wilson and his mother, Laurie, work together to bring the family’s sugary treat to festivals and events around the state. Coleman is now working full time to bring Old 97's kettle corn to more stores and boost online sales. Photo submitted

SPENCER — The COVID-19 pandemic forced many Americans to reflect on their lives and rethink their careers. Coleman Wilson was one of them.

After working everywhere from “greenhouses to warehouses,” Wilson decided earlier this year to go all in on the business his family started in 2016 — The Old 97 Kettlecorn Company. The move came after a long bout with the virus, which gave him plenty of time to think.

“I won’t say it was an easy decision, but COVID definitely made me re-evaluate where I was at and go ‘Am I happy where I’m at or could I be more effective working for myself?’” Coleman said.

Under Coleman’s full-time guidance, and with more than a little prompting from the pandemic, the Spencer-based kettle corn company has adapted its business model. Old 97 is now focused on selling its products on shelves and online, not just offering its sugary and sought after product at weekend festivals.

Regardless of where the Old 97 is hawking its product, there will likely be high demand. The company has built a cult-like following in its five years in business and was recently one of 68 products nominated for the Coolest Thing Made in NC online competition. Joining Cheerwine and Power Curbers’ curb and gutter machine, Old 97’s kettle corn was one of only three nominees representing Rowan County.

Although Old 97 didn’t make it to the final round of the competition, being nominated was still an honor.

“It always blows me away at how supportive everybody is to us,” Laurie Wilson, who has driven a school bus in Rowan County for nearly 30 years.  “We didn’t realize we’ve reached so many people. It’s exciting and it’s so humbling.”

It was actually Coleman’s younger sister, Taylor, who introduced the Wilson family to kettle corn over a half decade ago. Taylor, 25, attended college in northwest Pennsylvania, where kettle corn is much more common.

Before Taylor came home and cooked up a kettle corn recipe, the Wilson family was decidedly in favor of traditional popcorn, which is less sweet and more savory. It didn’t take long for that to change. 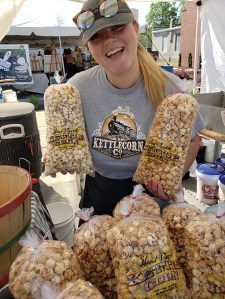 Taylor Wilson is responsible for introducing her family to kettle corn and inspiring the creation of The Old 97 Kettlecorn Company. Photo submitted.

“When she brought it back down here, we were movie theater popcorn people so we weren’t sure how it was going to work,” Coleman said. “After the first couple attempts of her getting (the recipe) down pat, it became addictive.”

The Wilsons decided to turn their newfound passion into a business and quickly built a brand honoring their hometown’s deep rooted connection with locomotives. The company’s name itself is a reference to the country ballad “The Wreck of Old 97,” which is sung about a mail train that crashed on its way from Virginia to Spencer. The kettle corn company’s logo is an exact depiction of the Old 97 train engine and was designed by Spencer Alderman and locomotive lover Sam Morgan.

“It’s a personal and unique thing to us,” Coleman said.

The Wilsons started at Father and Son produce market, where they set up a “ramshackle” tent with homemade equipment and popped their kettle corn on weekends. Things really got popping, however, when they were a vendor at the first Cheerwine Festival in 2017.

While the festival was unequivocally a success — Old 97 was “slammed” with customers — it was also a learning experience.

“After that, we decided we needed to change everything fast,” Coleman said.

The Wilsons added a food grade table and a motored “paddle monkey” that sits on top of the kettle and keeps the popcorn stirring. That job was previously done manually, which often left whoever was manning the machine exhausted and sticky.

As Old 97 made more appearances at festivals around the state, the Wilsons continued to add to their mobile setup.

“You have to crawl before you can run, so that’s what we did,” Laurie said. “Every time we did a festival and made extra money, we would buy something else to improve it a little more and a little more.”

After working many cold and windy days during Polar Express at the NC Transportation Museum, the family bought a trailer for cheap in Georgia and had it retrofitted and painted to fit their needs. They’ve hauled that trailer all over the state and region, working events like the Bigfoot Festival in Marion and the Everyday’s Day in Thomasville. Although Taylor has a full-time job and isn’t able to be at every festival, a combination of Coleman, Laurie and husband Danny Wilson are typically at every event. 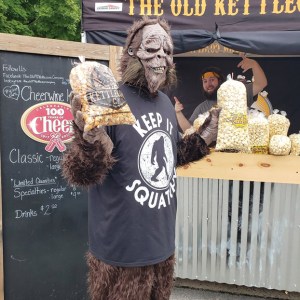 With Coleman Wilson in the background, a person dressed as Bigfoot holds up a few bags of The Old 97’s kettle corn. The Bigfoot Festival in Marion is one of the family’s favorite places to sell its kettle corn. Photo submitted.

Along the way, the Wilsons have perfected their kettle corn recipe and have started adding new flavors. Cheerwine, unsurprisingly, might be the most popular. “Apple pie” and “pumpkin spice” are offered in the fall. “Jalapeno” and “Sweet Heat” have appeared on the company’s menu as well.

Laurie said the company was poised to take another “evolution” forward and move into more retail locations when the pandemic struck. The virus cleaned out Old 97’s festival and event calendar, leaving the company without its primary revenue stream.

“The pandemic really did set us back,” Coleman said. “Losing events like Bigfoot Festival in Marion, the Cheerwine Festival, losing Polar last year, it definitely slowed us down.”

Without events to go to, the company was forced to reinvent itself.

“We noticed we can’t fully rely on our festivals, so we’ve become adamant about getting in stores or doing online orders,” Coleman said. “It’s a way to bridge the gap if something like that happens again.”

Since becoming Old 97’s only full-time employee, Coleman has helped the company do just that.

“It made a huge difference too,” Laurie said. “With (Coleman) working outside of the kettle corn business, it was basically me doing everything and him swooping in and helping when he could. It’s taken a lot off of me.”

Although several of the events Old 97 was scheduled to attend this fall have been canceled, the company’s kettle corn can now be purchased anytime from vendors across the county, including Elsie’s Ice Cream shop in Cleveland, West Rowan Home and Garden in Mount Ulla, Veterans and Variety in Kannapolis and the Robin’s Nest in Granite Quarry. Coleman said they’re working on a deal with a store in High Point. Kettle corn can also always be purchased online at www.theold97kettlecorncompany.com.