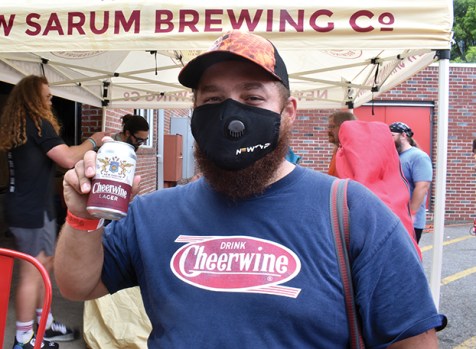 Lee Roberts was one of the first to get his hands on a six pack of New Sarum Cheerwine lager on Saturday. Roberts said he's missed out on buying the soda-inspired beverage before, so he makes sure to purchase some whenever it's available. Ben Stansell/Salisbury Post 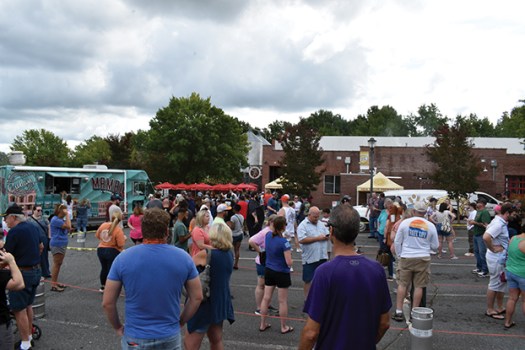 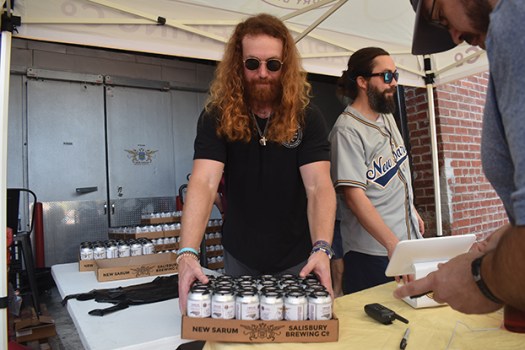 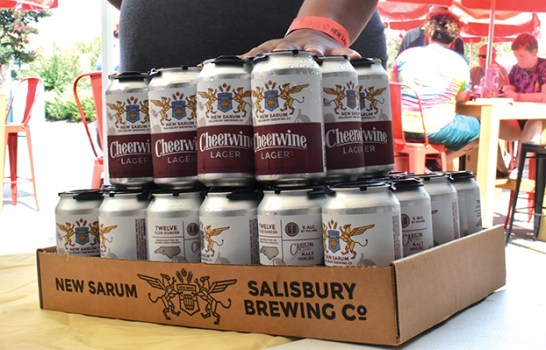 New Sarum's Cheerwine lager was the only version available in packages to go, but patrons could enjoy a Cheerwine sour, stout and hazy IPA on draft. With most people buying two six packs at a time, cans of lager were hauled off like treasure in cardboard boxes. Ben Stansell/Salisbury Post 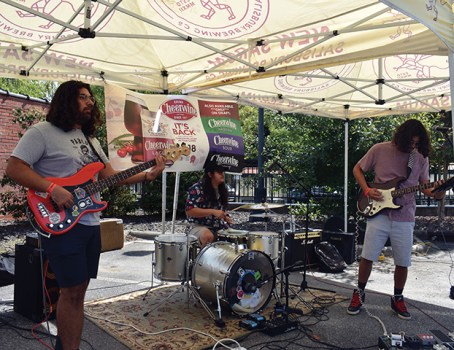 The band Bergenline performed in the parking lot while patrons enjoyed their Cheerwine beer. Bergenline was one of three bands to play on Saturday. Ben Stansell/Salisbury Post 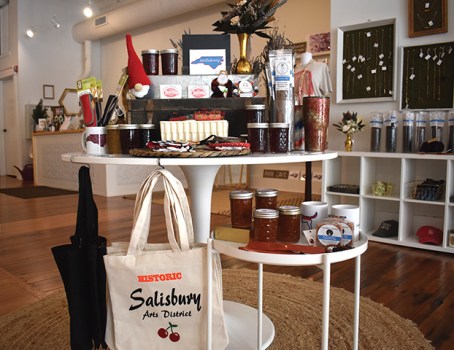 Hive, located at 126 E. Innes St. in downtown Salisbury, had Cheerwine products on display for anyone who wandered in after picking up some Cheerwine lager. The store always carries Cheerwine jellies and soaps, but had the bags specially made for the canceled festival. Ben Stansell/Salisbury Post 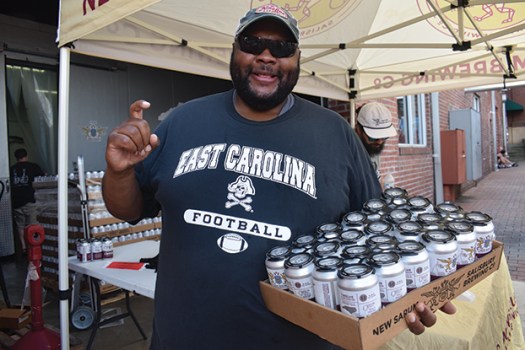 Shannon McKinnon, who lives in Wilson, North Carolina, stopped by New Sarum during his weekend trip to Salisbury to pick up some Cheerwine lager. Ben Stansell/Salisbury Post 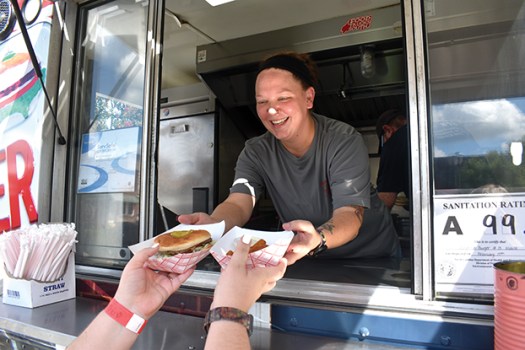 Standing inside the What-A-Burger food truck, Samantha Graham hands food to a hungry patron. What-A-Burger was one of several food trucks at New Sarum on Saturday. Ben Stansell/Salisbury Post 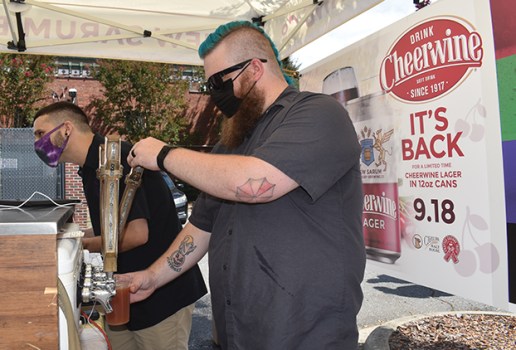 New Sarum's Johnny Maben pours a cup of Cheerwine beer. He was stationed at one of two tent areas in the parking lot of the brewery. Ben Stansell/Salisbury Post

SALISBURY — Lee Roberts says he missed the opportunity to enjoy New Sarum Brewing Company’s Cheerwine lager before, but he wasn’t going to let that happen Saturday.

Roberts, who lives in Faith, was near the front of a long line of patrons ready to purchase cans of New Sarum’s soda-inspired beer from outside of the buzzing Lee Street brewery.

Preparing for thousands of people to fill the streets of downtown Salisbury for the Cheerwine Festival, which was originally to be held on Saturday, New Sarum brewed hundreds of gallons of Cheerwine beer. Since last year’s festival was canceled, brewmaster Andy Maben decided to make this year extra special by adding three new varieties of Cheerwine beer, including a Cheerwine sour, stout and hazy IPA.

When the festival was canceled for the second straight year due to a rise in COVID-19 case numbers in Rowan County, New Sarum had a lot of beer on their hands and no festival to sell it at. That’s why the brewery held a release party on Saturday, offering its sought-after Cheerwine beer on tap and to go. But the brewery didn’t just release its excess of soda-flavored beer, it turned the day into a party by hosting food trucks and bringing live music to its parking lot.

“We were thinking it was going to be a huge day and it ended up being nothing, so we were lucky enough to schedule this,” Maben said. “I’m lucky enough and I’m counting my stars right now.”

Every time that New Sarum has released lager inspired by Salisbury’s favorite soft drink, it’s been a mad dash for beer lovers to get their hands on some. Saturday was no different.

While New Sarum didn’t start selling its beer until noon, the line for packs of the lager started forming around 9:30 a.m. By the time noon approached, the line stretched through the parking lot behind The Gateway building and spilled over into the sidewalk along Lee Street.

“People really enjoy it,” Maben said. “I’m lucky to be able to do it, and if it wasn’t for Cheerwine even considering it, we wouldn’t be here doing this. I’m grateful they trusted us and our craft as much as we trusted them and their craft.”

Patrons were limited to two six packs per person, which is what most people waiting in the line walked away with.

Shannon McKinnon, who was visiting Salisbury with his wife from their home in Wilson, stopped by to get a few six packs to take with him. McKinnon said they likely would’ve come to Rowan County for the Cheerwine Festival, but decided to come anyway for the beer release and to check out the city.

“I hated it because I wanted to come so bad,” McKinnon said. “I love Cheerwine.”

Although McKinnon said he hadn’t tried New Sarum’s Cheerwine beer before, he wasn’t worried about how the two six packs would taste.

“It’s Cheerwine, so you can’t go wrong with it,” McKinnon said.

Those interested in trying one of the three brand new versions of New Sarum’s Cheerwine could get a cup at one of two tents stationed in the parking lot or in the bustling taproom inside.

All of the brews were made with Cheerwine’s permission using the company’s Cheerwine syrup. New Sarum brewed 30 barrels of the Cheerwine lager, 15 barrels each of the sour and hazy IPA and 4 barrels of the stout. With each barrel containing 31 gallons, that means almost 2,000 gallons of beer were made and ready to go on Saturday.

The Cheerwine lager, Maben said, finished brewing just in time for New Sarum’s staff to put it in cans on Friday night.

Several of the bands and food trucks that were at New Sarum on Saturday were originally scheduled to play at the Cheerwine festival. Live entertainment included Bergenline, His and Hers and 9daytrip. Food trucks included LobsterDogs, What-A-Burger No. 13, Mambo on Ruedas and This Little Piggy BBQ Smokehouse.

Started six weeks ago, This Little Piggy food truck wasn’t able to get on the list for the Cheerwine Festival. However, the Granite Quarry-based business was planning to offer its pulled pork and other smoke pit delicacies at the grand opening of Bell Tower Green and Pops at the Post, both of which were similarly canceled.

When New Sarum reached out to see if they’d like to be a part of the Cheerwine beer release, Paige Overcash jumped at the opportunity.

“I was thrilled,” said Overcash, wearing a Cheerwine shirt and hat. “I canceled my vacation for this.”

New Sarum also had several signs stationed at the brewery letting people know that other businesses in downtown Salisbury were selling Cheerwine products. One of those businesses was Hive, which set up a display of locally-made Cheerwine products in its store. Hive will continue to offer Cheerwine jellies, soaps and more.

“We’re trying to support as much as we can to help the community downtown, which definitely looks forward to that extra cash flow from the Cheerwine Festival,” Maben said. “And this was year two we couldn’t do it.”