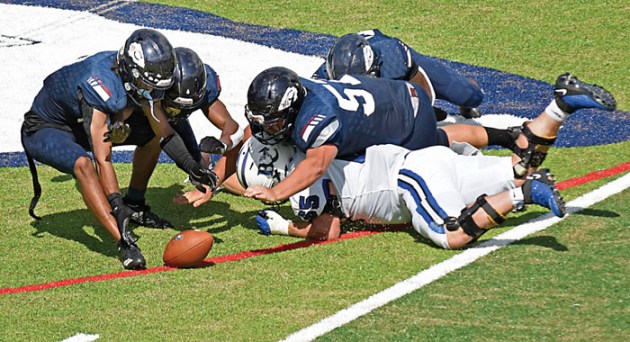 Catawba's defense goes after a Barton fumble. Isaiah Taylor 3, Dorian Bagley 16, and Luke Cerasi 57 dive for the ball with Bagley making the recovery. photo by Wayne Hinshaw, for the Salisbury Post 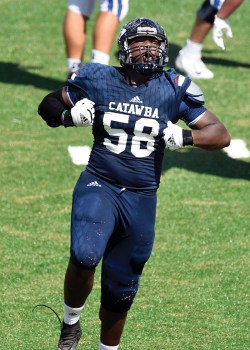 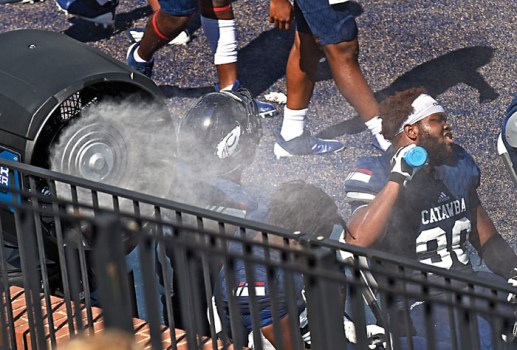 Catawba's defensive lineman Semaj Johnson 90 tries to stay cool in the mist and water bottle on the sideline on a very hot afternoon. photo by Wayne HInshaw, for the Salisbury Post 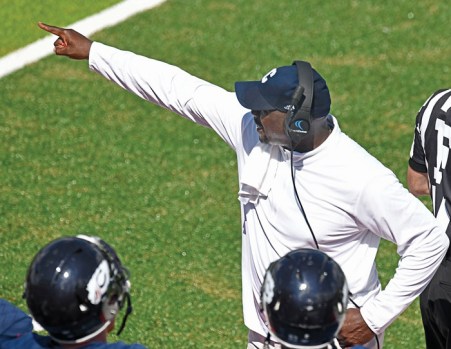 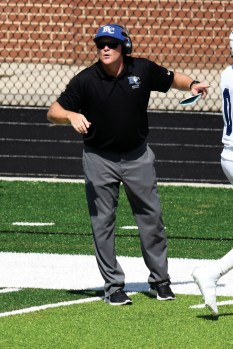 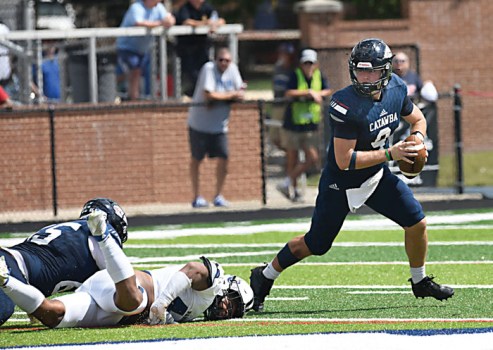 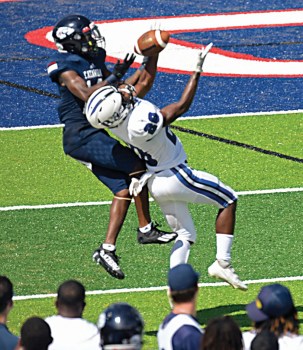 Catawba's Rasheed Singleton 14 fights with Mike Webb 28 for a reception. photo by Wayne Hinshaw, for the Salisbury Post

SALISBURY — Saturday afternoon’s football game at Shuford Stadium had the family feel of brothers wrestling on the floor in the living room.

It went down to the last play with Barton quarterback Jaquan Lynch still jitterbugging and searching desperately for an opening. Catawba’s defense made one final stand for head coach Curtis Walker to deny a Barton team guided by former Catawba head coach Chip Hester.

“I’ve got so many friends in Salisbury and there are a lot of guys in that Catawba locker room — Curtis Walker, Radell Lockhart, Timmy Pangburn, Corey Ready — that will always be part of my football family,” said Hester, who served as Catawba’s head coach for 11 seasons. “I wish there had been a better ending for us today, but we fought really hard against a good football team.”

Barton, mostly redshirt freshmen, has swift linebackers, large offensive linemen and a terrific back, but is a work in progress.

Hester’s game plan was to shorten the contest by controlling the ball with workhorse Jordan Terrell, who reminds him of Catawba legend Rodney Wallace. Barton’s goal was to keep Catawba quarterback Ken Avent III on the sideline watching Barton’s offense rumble. Barton did exactly what it wanted to do for two quarters. By halftime, the Bulldogs owned a 3-0 lead  — a Jackson Brooks field goal to finish a 15-play drive — and had possessed the ball for 21 of the game’s first 30 minutes.

An antsy Avent had barely worked up a sweat.

“Not a lot of opportunities for us,” Walker said. “We weren’t able to execute when we did have them.”

Barton had owned the game to that point, but had only a field goal to show for it.

“That was the frustrating part,” Hester said. “We were executing the game plan, but we left some points out there. Some of that was Catawba. Their red zone defense is very good.”

Catawba got the ball to start the second half and a drive was desperately needed. Catawba made good use of two blocking tight ends to open running lanes for Avent and Jyrea Martin and picked up three first downs, pushing the ball between the 30s. Kicker Clayton Crile has been all-world so far, and the Indians advanced the ball close enough for him to nail the 48-yard field goal that made it 3-3.

“We moved it well, and getting some points coming out of the half was huge,” Walker said.

Catawba safety D’verik Daniel led the charge on Barton’s next possession — a quick three-and-out. His tackle of Terrell in the Barton backfield put Barton in an uncomfortable place — facing third-and-13. The Indians got the stop. Barton’s punt was a short one, and the Indians had the ball back at the Barton 47.

Avent took the next snap to the house for the game’s first touchdown. Tight ends Evan Rojas and Austin Biggs executed key blocks, as Avent scooted to his right and saw nothing but the artificial turf of Kirkland Field in front of him. Crile’s PAT made it 10-3.

Linebacker Christian Bennett, the former East Rowan star, intercepted a pass to halt Barton’s next possession, but as the third quarter wound down, the determined Bulldogs were driving hard, looking for a tying score.

The critical play came on fourth-and-1 at the Catawba 14. It was no secret that Terrell was getting the ball one more time, and 260-pound Catawba lineman Mike Jones was there to greet him and stuffed him for no gain.

Then Catawba’s offensive line went to work on an 11-play, 88-yard drive that shaved six minutes from the clock and put seven points on the board. Avent faked a pitch and kept the ball on a  14-yard touchdown run, diving into the end zone.

Catawba led 17-3 with 5:27 left to play and appeared to have things well in hand, but that’s when Barton got its dormant passing game untracked, surged 75 yards in just 2 minutes, 16 seconds, and cut the Indians’ lead to 17-10 on a 6-yard run by Lynch.

There was 3:09 left when Catawba started its next possession. The Indians picked up a first down on a face-mask penalty, but they got behind the sticks when a running play lost 5 yards. Barton expended two of its three timeouts to stop the clock. Facing third-and-13, the Indians ran the ball and forced the Bulldogs to use their final one. Crile crushed his punt 58 yards, but it reached the end zone, and the Bulldogs started their last-ditch drive on the 20. There was 2:16 on the clock.

Barton was immediately facing fourth-and-14, but made the unlikely conversion with a 23-yard completion, Lynch to Nate Byers, and things were getting dicey for Catawba.

“I thought we were going to get off the field on that fourth-and-14, and we had chances to make plays that we didn’t make,” Walker said. “And Barton was executing.”

The Bulldogs reached the Catawba 21 and still had ample time, but Barton was flagged for a false start trying to spike the ball. That cost the Bulldogs 5 yards, plus a 10-second runoff for the penalty.

On second-and-12 from the 26, John Oxce stormed through to sack Lynch back at the 39. Lynch flung the ball away to incur an intentional grounding penalty — and another 10-second runoff.

One snap later, the Indians corralled Lynch at the 32, and it was finally over.

“Big sack by Oxce and our defense held when they had to,” Walker said. “We worked on our two-minute defense this week, and that work paid off. We didn’t play a great first half today, but we had tremendous effort in the second half.”

Avent rushed for 95 yards and threw for 81. Martin had 20 carries for 105 yards. Barton was able to take away Kujuan Pryor, Catawba’s main receiving weapon.

Calvin Stephens also had an interception for the Indians. Jeremiah Ferguson and Denoris Wardlow joined Oxce in the sacks column.

Terrell carried the ball 35 times for 177 yards, but most of his production was prior to halftime.

Catawba heads to 15th-ranked Wingate for its first South Atlantic Conference game and first road test next Saturday night. As tough as Wingate has been in recent years, Walker and the Indians are excited about that challenge.

For Barton, which will become a SAC associate member in football in 2022 and is already tackling a SAC schedule, next week brings a trip to Gaffney, S.C., to take on Limestone.

“We know we’re not there yet, but games like today’s give our young guys valuable experience, the kind of experience you can’t get from practice,” Hester said.