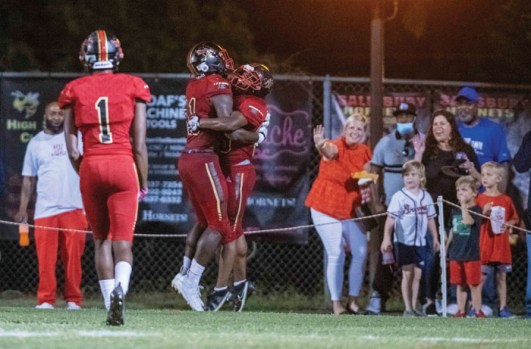 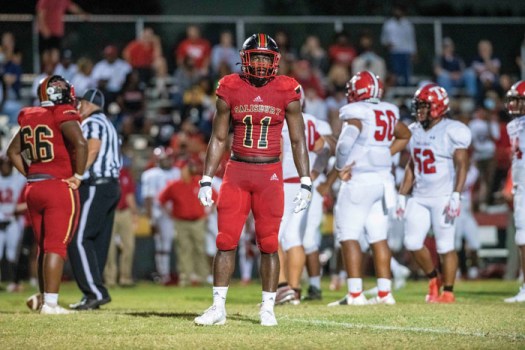 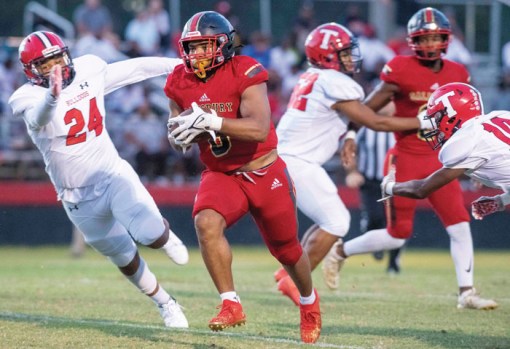 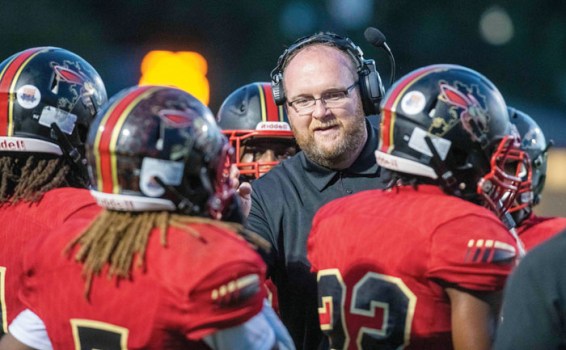 SALISBURY — Thomasville avoided the running-clock fate of Salisbury’s first three opponents, but the Bulldogs still were no match for the Hornets in Friday’s showdown.

Salisbury ran off 42 unanswered points at Ludwig Stadium while it still mattered and flattened the previously unbeaten visitors 49-21 in the 1/2A Central Carolina Conference opener for both teams.

Thomasville (3-1, 0-1) led briefly 8-7 after burning the Hornets with a long pass play on a blown coverage, but the Hornets (4-0, 1-0) were an offensive, defensive and special teams avalanche for the rest of the first half.

“We got a pretty good snowball going, and they couldn’t get out of the way,” Salisbury head coach Brian Hinson said. “Thomasville has a very good football team, the best we’ve played so far, but we wore them down.”

Hinson said film study showed that Thomasville had excellent linemen, but they were playing both ways. When the Hornets unleashed a grinding, punishing 92-yard scoring drive that chewed up most of the second quarter, that proved to be the turning point.

“Thomasville got tired,” Hinson said. “Those are talented kids, but you could tell from the body language. They were walking around with hands on hips.”

Salisbury led by as many as 41 points, but a 42-point lead is required for a running clock. Salisbury didn’t quite get there, and when Salisbury reserves turned the ball over three times, Thomasville worked for a couple of touchdowns that made the final score look competitive.

Salisbury sophomore quarterback Mike Geter provided another sensational game. His five pass completions netted 219 yards and he had long TD passes to Marcus Cook and Deuce Walker. Geter added three rushing TDs of 9, 2 and 4 yards, giving him 11 for the season.

“He had some pretty great percentages,” Hinson said. “We felt like if we had an advantage on them, it was on the outside, and we got Geter to the edge a lot,” Hinson said. We got some good blocks from our wideouts.”

Workhorse back JyMikaah Wells did most of his damage in the first half. He finished with his biggest game of the season — 15 carries for 168 yards and two touchdowns. He broke scoring runs of 34 and 20.

Jabrii Carolina scored two rushing TDs and topped 100 yards for the Bulldogs. Quarterback CJ Dickerson completed a 76-yard pass to the Salisbury 2 early in the game and scored the touchdown himself on the ground, but he left the game with injury in the third quarter.

Salisbury got good field position on the opening kickoff and scored on its third play when Wells took an option pitch from Geter and housed it.

Thomasville answered in stunning fashion on the Dickerson’s pass play, added a 2-point conversion, and led 8-7.

Salisbury wasn’t fazed and moved quickly to score again. Geter converted a third-and-28 with a pass play to Cook, and then scored his first TD. Wade Robins’ PAT made it 14-8 with 5:25 left in the first quarter.

Salisbury’s defense provided a short field with a fumble recovery, and Geter had a 26-yard run that set up his second TD, and it was 21-8.

The Hornets forced a punt — a good one to the Salisbury 8 — late in the first quarter, but that proved to be the starting point for the defining possession of the night. Salisbury marched it 92 yards and for eight minutes, with the offensive line turning in its best work of the season. Geter’s third rushing touchdown finished the drive with 4:56 left in the second quarter, and his 2-point conversion made it 29-8.

Thomasville was forced to punt with 1:53 left in the half and after Wells picked up a first down, the Hornets didn’t sit on the ball. Geter hit Cook well down the field for what turned out to be a 72-yard scoring play. Cook stepped out of a tackle and took it home for a 36-8 halftime lead.

“Backbreaker,” Hinson said. “They were playing with one high safety and Geter looked him off to the other side of the field. Then Cook made a play.”

For all intents and purposes, it was over at that point, but the Hornets kept coming. Jaden Gaither picked off a pass early in the third quarter, and it led to Wells’ second touchdown. Salisbury didn’t execute on the PAT, but it was 42-8.

Thomasville had a penalty-aided drive that died at the Salisbury 5. Then the Hornets struck again — Geter to Walker for 92 yards and a 49-8 cushion.

It got a little crazy after that, as the Hornets played everybody, including a lot of jayvees, and Thomasville kept competing, even without its QB.

“Too many turnovers and too many penalties,” Hinson said. “Most of our penalties were from being aggressive and you have to be able to live with some of that. You don’t want to take the excitement of the game away from the kids. You can’t pull the reins in too much.”

Joe Pinyan, who coached 100 wins and a state title in 10 seasons at Salisbury and presided over numerous state championships in other sports as AD, was honored as a “Coaching Legend.” Many of his former players were in attendance. Also honored as a “Coaching Legend” was Dale Snyder, long-time AD who coached eight state championship teams in boys and girls golf. Pinyan and Snyder were added to the fence of honor at Ludwig Stadium. They were the 17th and 18th honorees. … Salisbury plays at West Davidson next week.

SPENCER — North Rowan had no issues in its opening game in the 1A/2A Central Carolina Conference.

In the second quarter, Malakie Harris had a fumble recovery for a touchdown, and Morrow and Jeremiah Alford had rushing touchdowns as the Cavaliers took a 24-0 halftime lead.

Alford threw touchdown passes to Amari McArthur (63 yards) and Amir Alexander (20 yards) in the third quarter, while Mkwasi Walker scored on the ground.

The TD pass to Alexander with 5:23 left in the third quarter made it 44-0 and triggered a running clock.

The Cavaliers tackled on two more scores in the final quarter, with Kh’oron Miller scoring on a 19-yard run and Trey Johnson scoring on a fumble return on the ensuing kickoff.

Next for North is a trip to Thomasville.

South trailed 19-0 in the second quarter after Northwest QB Alex Walker ran for a score and threw touchdown passes to Tru Sierra and Camden Barringer, but the Raiders scored late in the first half to make it 19-7 and took some momentum to the second half.

South pulled within 19-13 in the third quarter, but Walker threw a touchdown pass to Tevin Tucker for a 25-13 lead. That insurance score would prove decisive for the Trojans (2-3, 1-0).

South scored in the fourth quarter for 25-20 and got the ball back with a chance to pull it out.

Northwest made a fourth-down stop with a minute left to secure the win.

GRANITE QUARRY — East Rowan hung in the game for the first three quarters, but turnovers and a stout Concord defense kept the Mustangs off the scoreboard.

Concord (1-2, 1-0) had a quick start in the South Piedmont Conference opener for both teams. The Spiders, who have lost only three times to the Mustangs in school history, scored on first-quarter runs by Zach Jenkins and Kadin Presutti and tacked on 2-point conversions for a 16-0 lead.

East (0-4, 0-1) kept the Spiders from scoring in the second quarter and blocked a field-goal try late in the half.

East had a scoring opportunity early in the third quarter but was stopped at the Concor 20.

Kobe Watts Williams broke a touchdown run on fourth-and-long to give the Spiders a 23-0 cushion late in the third quarter.

Concord scored on defense in the fourth quarter on a fumble return by Brenden Crowder, and Antonio Jackson added a 36-yard scoring run.

Josh Roman-Soto recovered a fumble for the Mustangs.

East will look for its first win next week at Northwest Cabarrus.

Hickory Ridge (3-2, 1-0), which had lost to Charlotte Catholic and top-ranked Julius Chambers in tough games, scored on its first three offensive possessions, blocked a punt for a touchdown and followed with a touchdown pass. Incredibly, the Bulls led the Wonders 36-0 after a quarter.

It was 45-7 at halftime and the Bulls were headed for their second win over the Wonders all-time.

WINSTON-SALEM — Davie turned another football game into a track meet and blistered the Demons in the Central Piedmont Conference opener for both teams.

Alex Summers threw for 232 yards and five TDs and sat down early.

Zymere Hudson had seven catches for 102 yards. Markel Summers had 15 carries for 138 yards.

Davie hosts East Forsyth in a big one next week.