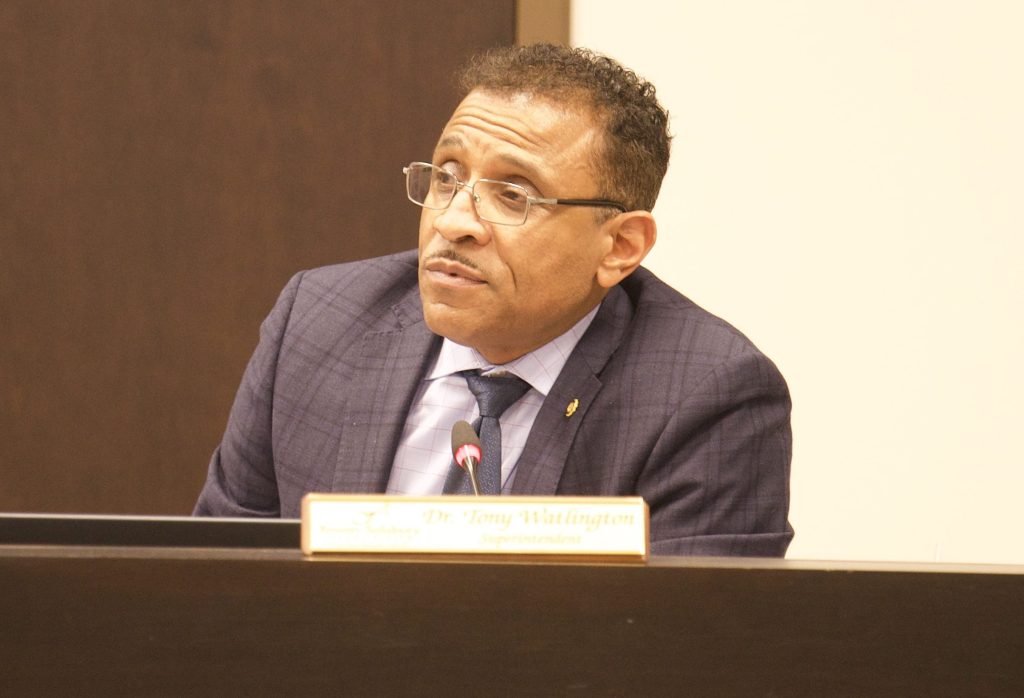 SALISBURY — Rowan-Salisbury Schools Superintendent Tony Watlington on Thursday was the featured speaker during the kickoff of this year’s Rowan County Chamber of Commerce’s Power in Partnership series.

The speaking series normally includes an in-person breakfast and networking time, but the program is virtual for the time being.

Watlington gave attendees a presentation similar to those received by the local and state boards of education. He went over what the district is doing well, including raising the graduation rate and reducing dropout rate, as well as areas the district needs to improve, including enrollment, meeting growth goals in more schools and closing achievement gaps between demographics of students.

“Education is the key that can unlock the door to the great American society,” Watlington said. “It is the only difference maker that can work all the time if we invest in young people, if they have the right opportunities and if we’re all willing to roll up our sleeves.”

Watlington said he is an idealist who still believes in the idea of the American dream. The district has to take steps so children can access that dream, he said.

He was attracted to RSS by its special renewal status. It’s unique in the state, with freedoms normally only afforded to charter schools given to the district at large. Watlington said the district has only tapped the tip of the iceberg of what it can do with the additional flexibility.

The district currently is in the process of creating a new accountability model and a strategic plan that will guide it for the next few years.

Watlington said the district needs to focus on building partnerships with families. He wants to launch a parent academy later this school year as well as build more community partnerships.

“We have a lot of agencies that we could work more intentionally with in Rowan County,” Watlington said.

He referenced a traditional greeting of the Maasai, an ethnic group predominantly living in Kenya, which translates to “and how are the children?”

Rowan County Chamber President Elaine Spalding said education always ranks as the most important issue during the organization’s member surveys. She started questions for Watlington by asking him about the most important thing the business community can do for the schools.

The business community should stay tuned to RSS’ strategic plan and be partners in initiatives coming in the future, he said.

Watlington was asked what RSS doing is to address the teacher shortage affecting the entire state. He said the pipeline of people learning to become teachers is critical to national security and that the number of people attending teacher education programs is dropping. Watlington said the district is using federal grant money to incentivize and recruit teachers with signing bonuses, but he noted the district is competing with wealthier counties.

When asked about RSS’ renewal status, Watlington told the chamber the most success the district has had so far with the status has been budget flexibility.

“North Carolina is a very prescriptive state in terms of how you can use your resources,” he said.

Another question asked where students leaving the district are going. Watlington said charter schools are a common perception, but the reality is that there are a large number of home school students in Rowan County. Watlington said RSS should ask them what they are looking for.

“We’re a renewal district,” Watlington said.  “We should be the most innovative district in the state.”

The final two questions were about why districts do not compare themselves to charter schools and teachers expressing political views in the classroom.

On the first question, Watlington said public school districts and charters historically have operated under different rules, but it might be worth looking into for RSS. On the question of teacher political opinions, Watlington said a teacher’s role is not to indoctrinate students into their political views. Teachers should also not feel like they are on public display every second of the day, he said.

“We want people to come in, do their work, be professionals,” Watlington said.