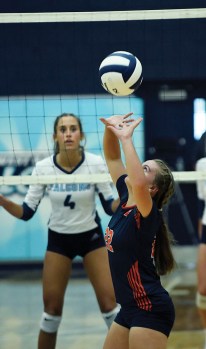 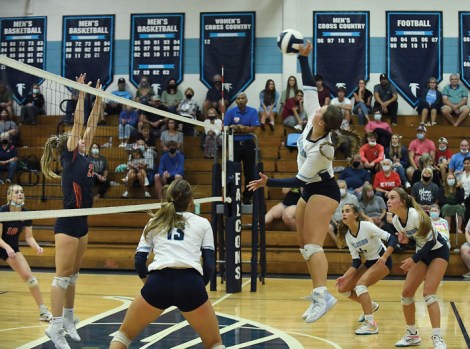 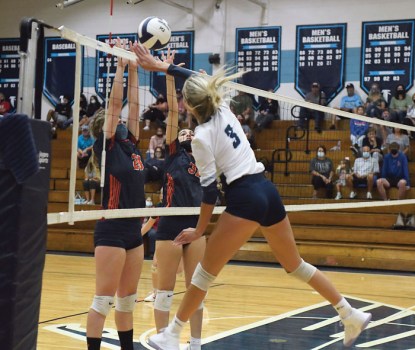 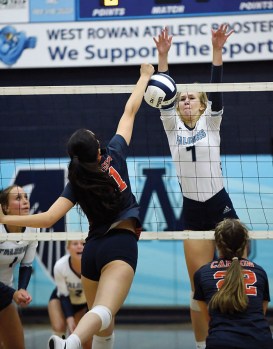 MOUNT ULLA — There’s no place like home, and West Rowan’s volleyball team got back on track in a sweep of rival Carson.

“We had a stretch of four games where we just weren’t very good,” West coach Jan Dowling said.  “Part of that was being on the road all the time. It was nice not having to worry about chasing down a bus and figuring out seating assignments. We had a chance to just play, and this was the best we’ve been in a few weeks. Our little ones passed the ball great.”

West and South Rowan will finally have their first showdown next Tuesday, but for now, the Falcons, 13-2 overall, 6-0 in the South Piedmont Conference and ranked third in the 3A West Region by MaxPreps, are in charge of the conference race.

South, which crunched Northwest Cabarrus in a hurry on Thursday, lost to Lake Norman Charter for its only SPC setback and is ranked 13th in the 3A West.

West has beaten Lake Norman Charter. Carson came into this week undefeated in the league, but was swept by South on Tuesday before falling to the Falcons 25-15, 25-17 and 25-13 on Thursday

“Eighty percent of this game is mental,” Dowling said. “I think the girls have been trying hard to be perfect, but this is a game of mistakes. Make the mistake, but then let it go and move on to the next play.”

Carson ruled the county for a long time, but has now lost six in a row to West. The Falcons own a 12-match county winning streak. Their last loss in the county was to Carson on Oct. 9, 2018.

Still, West isn’t the well-oiled machine it was in 2019 when it went 28-1 and had Tori Hester and KK Dowling flying around for kills like Supergirls. This team plays closer to the floor, needs to get kills from a half-dozen people and is beatable when everything isn’t clicking.

But most of the parts were clicking against Carson (6-8, 4-2), which dropped into fourth place.

Dowling was impressed with Carson libero Allie Burns and Maddi Thomas, a tall hitter she hadn’t seen before.

West went to the wire in two matches with middle-of-the-pack East Rowan on Tuesday, so Dowling was happy to see the Falcons respond positively to a lively “team discussion.”

“Ashlee Ennis was the only one who played well at East and she balled out and saved us,” Dowling said. “Look, we’re still pretty good, but we’re not so good that we can go through the motions and beat people. We’ve got to bring it every match. Today, we brought it.”