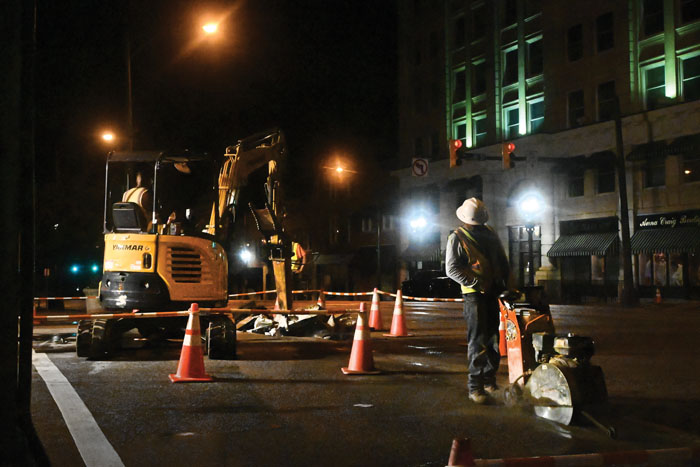 Crews work downtown as construction gets underway in preparation for Main Street to be repaved and restriped. Photo by Andy Mooney, Salisbury Post.

SALISBURY — The North Carolina Department of Transportation will begin a repaving project on Main and Innes streets, near downtown Salisbury, on Monday evening.

Work will occur 8 p.m. to 6 a.m. Mondays through Fridays (including overnight Friday into Saturday morning) to minimize the disruption to downtown businesses during work hours. Drivers will experience some daytime lane closures during the milling, repaving and striping progress.

Main Street will be affected northbound from Chestnut to Lafayette streets, followed by Innes Street from the railroad bridge to Fulton Street. City Communications Director Linda McElroy told the Post construction from Chestnut to Lafayette streets should take up to three weeks, but the city is not certain  how long construction will span on Innes Street.

A city of Salisbury news release said its Engineering Department will work closely with NCDOT and contractors about pavement marking and parking changes downtown. There may be periods when parking areas are unmarked. “No parking” signage will be posted where applicable before the project begins. Vehicles in no parking zones are subject to be towed.

Construction may be delayed by inclement weather, according to the news release.