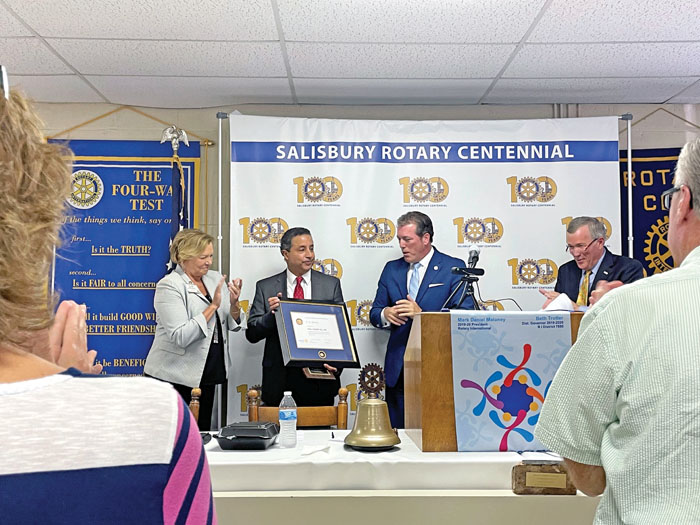 Natalie Anderson/Salisbury Post — Former Rotary Club of Salisbury presidents Elaine Spalding (left) and Steve Fisher (center right) granted Bryan Beatty, the son of late O.K. Beatty, with posthumous membership after a racial incident in the 1970s interfered with his father's invitation to join the club. O.K. Beatty would have been the first Black member of the club. Bryan Beatty was also awarded a Paul Harris Fellow award for his father, which is granted to those who have donations under their names.

SALISBURY — The Rotary Club of Salisbury on Tuesday completed some unfinished business by granting the late O.K. Beatty posthumous membership in the organization after a racial incident prevented him from joining in the 1970s.

Beatty’s son, Bryan, who is a former secretary of the North Carolina Department of Public Safety, accepted the membership in addition to a Paul Harris Fellowship, which is given to those who contribute or have contributions made in their name to a Rotary club.

O.K. taught at Livingstone College for 30 years before returning in 1987 to serve as president for two years. He served in the U.S. Army during World War II and was among the forces that liberated the Philippines Islands and worked under former Gov. Jim Hunt. Additionally, O.K. was Salisbury’s first Black member of the City Council and first Black mayor pro tem. He would have been the first Black member of the Rotary Club of Salisbury thanks to Fred Stanback, but because of a racial event that happened in the 1970s he was no longer invited to become a member.

Rotary President Ted Goins told the Post the incident — as told to him — involved two white men who went to the well-known Frankie’s Chicken Shack before a fight ensued that raised racial tensions in Salisbury. When Stanback informed O.K. that he couldn’t join the club because of the tensions, O.K. was “most gracious and understanding” and relayed his own story of his time in World War II when German prisoners of war were allowed to go into a train station restaurant in a small southern town to eat, but the Black American military members were not allowed to enter.

Goins on Tuesday said the previous few years have raised the nation’s awareness of individual and systemic racism. He credited Rowan Chamber of Commerce President Elaine Spalding and F&M Bank Chair and CEO Steve Fisher with leading the club’s efforts to build on that awareness, resulting in a Diversity, Equity and Inclusion Committee. Goins said the story of the revoked invitation in the 1970s was recently brought up among club members, and Treasurer Bill Lee suggested posthumous membership. He also credited Stanback with “keeping this in front of us.”

After accepting both awards, Bryan Beatty recounted some memories of his father, who died 17 years ago. O.K. was born in South Carolina, and his earliest memories involved his family sneaking away from a farm where they were sharecroppers. Bryan said his father was 8 years old when the stock market crashed, meaning he “came of age” during the Great Depression.

Bryan added that his father also never complained about living through the worst periods of segregation and the Jim Crow era.

“It didn’t make him bitter. He never said anything that indicated to me that he was bitter about the experiences that he must have had,” Bryan said. “I know he was a man who believed in treating everyone with dignity and respect and opposing injustice whenever he saw it.”

He also rarely spoke of his experiences in World War II, which Bryan said led to his father’s opposition to war as a resolution to conflict. Bryan recalled his father disagreeing with America’s decision to begin a war in Iraq.

Bryan recalled his father reciting a stanza from George Linnaeus Banks’ poem titled “What I Live For.” The elder Beatty kept the poem in his wallet for more than 20 years, and it’s been in Bryan’s since his father’s death.

I live for those who love me, for those who know me true;
For the heaven that smiles above me and awaits my spirit too.
For the cause that lacks assistance, for the wrong that needs resistance,
For the future in the distance, and the good that I can do.

“Today is about us as a club remembering where we’ve been, but also paving the way to a better future for our club and our community,” Fisher said when giving Bryan the awards. “And I thank you and your father for your patience — because it took us a while — your humility and your willingness to step forward with us together.”

Livingstone College President Jimmy Jenkins said he was proud to “stand on the shoulders” of a man who helped propel the college forward “in a very special way.” Jenkins credited O.K. with bridging the gaps between the college and the community throughout his tenure.

“I want to commend Rotarians for your willingness to acknowledge a misjudgment years ago,” Bryan said. “We have to acknowledge our mistakes before we can correct them. So I think that it’s really meaningful that you’ve done this.”