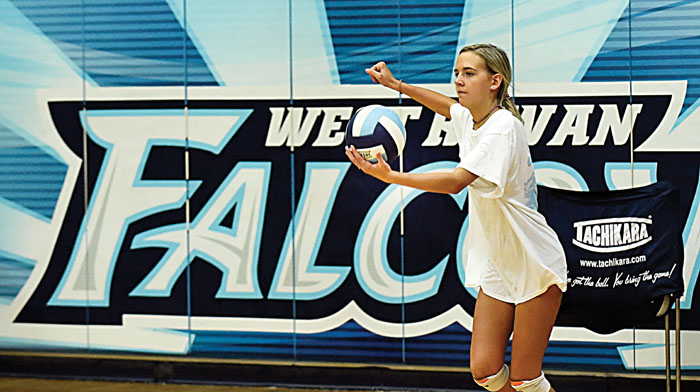 West Rowan won at East Rowan 25-23, 25-15 and 25-22 to stay undefeated in the South Piedmont Conference.
The Falcons (12-2, 5-0) are alone in first place. South Rowan, Carson and Lake Norman Charter have one loss.
East trailed 22-14 but rallied to make the first set tight. Emma Clarke and Madelyn VonCanon had the key kills as West held on.
West had an easier time in the second set and closed it out with two aces by Noe Gaeta.
In the third set, East started strong and led 7-2, but the Falcons were able to come back.
Ashlee Ennis had nine kills and 14 digs for the Falcons.  Kelcie Love had six kills, 11 digs and three blocks.  Anna Grace Blackledge had six kills. Maia Gaeta had five kills. Brooke Kennerly had 11 digs. Noe Gaeta had 29 assists and four aces.
•••
South Rowan (9-2, 4-1) swept Carson 25-19, 25-20 and 25-22 on Tuesday in the SPC.
Avery Welch had  nine kills for the Raiders (9-2, 4-1).  Meredith Faw had kills and 12 digs; Cameron Black had seven kills, nine digs and four aces. Leah Rymer had six kills, nine digs and 20 assists; Emma Owens had 10 assists; Payton Black had 24 digs.

South is at Northwest Cabarrus on Thursday. Carson is home for a non-conference match with West Davidson tonight and goes to West Rowan on Thursday.

James Anderson (10th, 19:33) was the top runner for Carson. The Cougars placed fifth.

Juan Ramon scored both goals for the Falcons.

Luis Cruz made six saves for the Falcons.

Carson defeated South 3-2 in overtime in SPC action on Tuesday.

Isaac Diaz had an assist.

Salisbury has won twice by forfeit and has won seven matches by 9-0 scores.

This is Powell’s second MVP award, his first since joining Arizona in 2019.

Powell led the Rattlers to a 14-3 record this season and a runner-up finish in the playoffs.

He made his strongest impact on the ground, as he led the league and broke franchise records in rushing yards with 902 and rushing touchdowns with 35.

The former Carson standout has piled up strikeouts in his last two starts for the Down East Wood Ducks, a Texas Rangers farm club.

White allowed two hits and two walks in five innings against the Kannapolis Cannon Ballers and struck out 12. He allowed seven hits, no walks and two runs in six innings while striking out 10 against the Carolina Mudcats.

White missed most of this season with a hand injury and will pitch in the Arizona Instructional League after this season.

Ike Freeman (East Rowan) is playing Double-A for the Akron Rubber Ducks. Freeman has two homers and 15 RBIs and is batting .210.

Chloe Crane earned a sixth-place finish for the Catawba Indians. She posted a 150 total after rounds of 77 and 73. Emily Wellspeak carded a 153 with a 75 and a 78 and finished 12th.

The Chiefs Club is up to 489 members.

B.A.S.S. will hold the Basspro.com Bassmaster Southern Open from Sept. 23-25 at Lake Norman. This will mark the ninth major B.A.S.S. event held on Lake Norman and the first since 2018.