SALISBURY — Standing in a Rowan County courtroom Tuesday afternoon, attorney Ryan Stowe framed his client’s case as a matter of self defense during a potentially deadly attack.

“This case is less about murder as it is self defense,” Stowe said.

Mason, 45, was charged with the crime following a shooting at Fishzilla Arcade at 1812 E. Innes St. in April 2018 that left James Christopher Davis dead. With the 12-person jury selected and four alternates chosen, the trial against Mason got underway on Tuesday afternoon.

In her opening argument, Greene said the shooting was preceded by an argument instigated by Mason and a woman named Andrea Dillard, with whom she said Mason is friends. The argument evolved into Mason eventually throwing Davis’ phone. Greene said Mason shot Davis twice during the incident, once in the back and once when he turned around.

In his opening argument, Stowe relayed a different retelling in which Davis assaulted Mason “without warning” and dragged Dillard across the room. That eventually led to Mason, whom Stowe noted had a concealed carry permit, using her small handgun to shoot Davis in order to stop him from “choking” Dillard. Mason thought she missed the first shot aimed at Davis’ back, which is why she fired again when he turned around, Stowe said.

Following the opening arguments, the prosecution led by Greene and fellow Assistant District Attorney Barrett Poppler called Cheviss Bennett as its first witness to the stand. Bennett was in a relationship with Davis for 21 years and together the couple had three children.

When Bennett took the stand, Poppler walked her through a retelling of the events leading up to the deadly shooting at the arcade. Bennett, who refers to Davis by his commonly used nickname “Milkbone,” or “Milk,” described their last evening together. The night began with a trip to Walmart, where Bennett said they purchased toys for their two youngest children.

Then, the couple picked up McDonald’s and ate dinner with their two youngest at home before venturing out to an adult gaming arcade near Walmart. Bennett said Davis wanted to visit the arcade to win enough money to make a trip to Raleigh to watch their eldest son play in a basketball tournament.

After finishing up at the arcade near Walmart, Bennett said Davis wanted to stop by the Fishzilla Arcade, where he’d been employed for several months. Once there, Bennett said she stayed in the car while Davis went in to check on his fellow coworkers. Bennett said she did not want to enter Fishzilla because of an incident that occurred in the parking lot weeks earlier, when Davis exited the building behind Dillard and Bennett confronted him about walking Dillard to her vehicle.

Bennett said she was eventually coaxed by Davis into entering the arcade hours before the shooting to play on a new gaming table. The couple played for about an hour with another person, Bennett said, before Mason arrived with Dillard. Bennett said the two immediately sat down at the same table. A loud argument ensued in which Dillard and Mason were “talking a lot of junk.”

The argument eventually moved to the front of the arcade after employees at Fishzilla told them to quiet down or leave. At the front counter, Bennett said the argument continued while she attempted to cash out her winnings and that Mason did something to cause Davis’ phone to flip onto the floor. Bennett said Dillard then kicked Davis to the ground before Mason shot him while standing beside Dillard. Bennett said she never saw Davis punch or hit Mason or Dillard.

Once Poppler finished his questions, Bennett was cross examined by defense attorney Todd Paris, who is representing Mason with Stowe. Paris grilled Bennett on her memory of the evening after presenting her with a copy of a report she gave to police. In response to Paris’ line of questioning, Bennett said she had been diagnosed by a doctor with post-traumatic stress disorder following the incident and that it affects her memory.

Paris asked Bennett to show the jury where Davis touched Mason during the altercation. Bennett put her hand near her throat, but she said Davis only did it to push Mason back.

Paris also questioned Bennett about physical contact between Dillard and Davis when Mason fired the deadly shots. Bennett replied that Davis was on the floor, not touching Dillard, when both shots were fired, which contradicted Stowe’s initial telling of the events.

When Bennett stepped down from the stand, the prosecution called Sgt. Daniel Lancaster of the Salisbury Police Department to give his retelling of the incident. Lancaster was one of several officers who responded to shots fired at Fishzilla in the early morning hours of April 22.

The prosecution showed the jury video footage captured during the incident from Lancaster’s body camera. The footage was shown to jurors on both a wall-mounted TV and a large TV wheeled to the front of the courtroom’s gallery. The jury in the trial is located in the gallery instead of the jurors box to allow for proper social distancing.

The footage depicted Lancaster responding and finding Davis on the floor of Fishzilla with gunshot wounds and showed the desperate attempt to save the man’s life by police and emergency personnel.

The trial will continue Wednesday morning. The prosecution plans on calling several witnesses to the stand and will likely submit several more videos and pictures into evidence. Poppler has told jurors he expects the trial to last for a week to a week and a half. 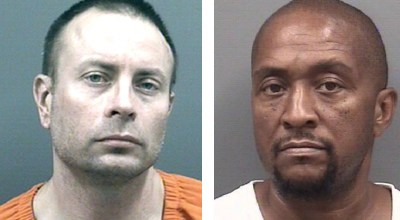