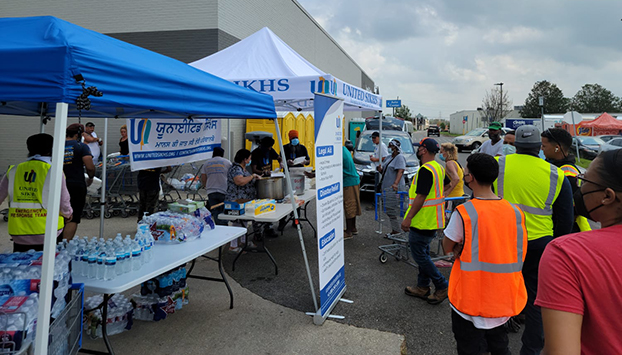 More than 30 volunteers from the United Sikhs, an affiliate of the United Nations, set up for at least seven days to provide St. John the Baptist Parish residents with hot meals, water, cleaning supplies and personal hygiene products.

Folks from the South know all about our customary hospitality. But in a part of the country all-too-familiar with natural disasters and destruction, Louisiana, the resiliency of its people is unmatched.

On Aug. 29, Hurricane Ida made landfall in Louisiana as a category four hurricane, pelting hundreds of thousands with winds up to 150 miles per hour with little reprieve. A few days later, the Post deployed me to help one of its sister newspapers, the L’Observateur, with coverage of how LaPlace and other areas outside of New Orleans are recovering from the destruction left behind. Hundreds of thousands of residents were already trying to recover from five hurricanes that made landfall in the state in 2020, and the state still has one of the lowest vaccination rates in the nation.

Admittedly, walking up to strangers and asking them questions during times of tragedy isn’t my favorite part of being a reporter. But I was struck with how forthcoming and open every person I spoke with was in telling their story. All throughout my trip, I heard stories of survival and resilience in once again picking up the pieces from another storm challenging Louisiana and its people. Nearly everyone I spoke with in LaPlace told me “this is the worst one,” with the exception of Hurricane Isaac in 2012. LaPlace is located west of New Orleans in St. John the Baptist Parish, situated on the east bank of the Mississippi River. It’s important to note the location because many residents are also too familiar with living in the shadow of New Orleans, especially when it comes to recovery.

That’s the case when it comes to risk reduction systems such as levees, too. Following Hurricane Katrina in 2005, the federal government invested $14.5 billion on projects that strengthened protection from flooding and storm surge in New Orleans and some surrounding suburbs south of Lake Pontchartrain. But intense winds from Hurricane Ida pushed water from Lake Pontchartrain toward the western edge, resulting in flooding for areas located outside of New Orleans’ levee system. The same happened in 2012 with Hurricane Isaac.

After 30 years of requesting a levee extension across the east bank of St. John the Baptist Parish, Congress authorized a $760 million project in 2018 to construct an 18-mile levee system that will provide storm surge protection to more than 60,000 residents who currently have little to no structural protection from hurricanes. Construction on the levee system had just started in May, with an estimated completion in 2024. Officials there told me it was too early to know the impact from Ida on the project. But some LaPlace residents are rethinking whether they can risk another storm like Ida before then.

I was stuck by how many residents I spoke with who — as they’re steadily relocating their entire house into their front yards — were concerned for their neighbors located west of them.

“I’ll be dead and gone by the time that levee comes,” LaPlace resident Vernon Bailey Sr. told me. “The water is going to start going uphill because of the simple reason every time you put a levee, you’re protecting this one but you’re not protecting everybody. It’s fine for us, but what happens to the people over there?”

It’s no surprise Louisianians, who take great pride in their food, kept everyone around them fed. While I was speaking with one family who lost everything, they were handing me bowls of jambalaya cooked for their entire neighborhood. Thanks to one family, a neighboring Vietnam veteran who lives alone and recently lost part of his heart didn’t have to go to bed hungry. Churches had lines of cars waiting for hot-cooked meals. One local meat market was the only place to buy food in a community of 8,600 residents. The United Sikhs, an affiliate of the United Nations, deployed to the area to provides thousands of hot meals each day.

While some families were happy I could shed light on their challenges, I felt defeated in not being able to do more for the people who have grown up in and love Louisiana like I do. One couple told me they applied for FEMA disaster assistance with an agent and were denied without an explanation. They and their three young children resorted to sleeping in their vehicles because at least it had air conditioning. Unfortunately, there were too many other families in similar circumstances.

Hurricane Ida should serve as a warning for more serious storms to come. Because Ida was fueled by moving over abnormally hot water in the Gulf of Mexico, the last inhabitable barrier island off Louisiana’s coast, Grand Isle, is no longer inhabitable. It’s past time to get serious about climate change policies. Folks have a lot of pride about Louisiana and its rich and diverse culture. Its people should channel that love and pride into saving it.

Natalie Anderson is a reporter for the Salisbury Post.