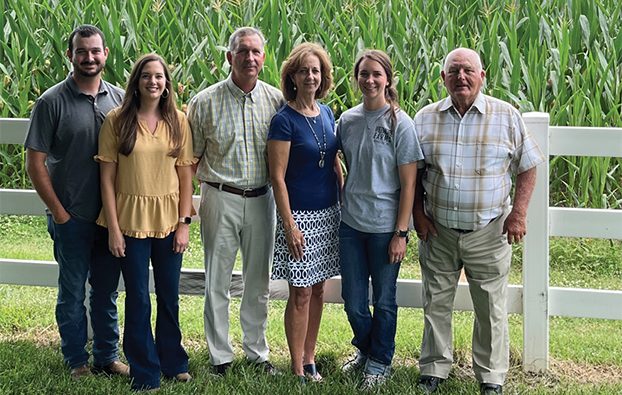 WOODLEAF — Conservation runs in the family at Wetmore Farms.

Now they’ve got two awards to prove it.

The farm, which spans about 450 rolling acres in western Rowan County, was founded by William H. Wetmore in 1908. It was originally a cotton and wheat operation, but transitioned to dairy in the 1930s. The Wetmores changed to row crops and peaches until the 1980s, when the first tomato crop was grown.

The farm, which now specializes in growing a variety of vegetables and also produces beef, is managed by Artie and Libby Watson and their children, Jacob and Laura. Artie, who met Libby when they were in kindergarten, started working at Wetmore Farms for Libby’s father and uncle when he was  a teenager..

“I never did leave,” Artie said.

Like the generations of farmers before them, the Watsons operate Wetmore Farms with conservation practices at the forefront. Those practices have earned them the Outstanding Conservation Farm Family of the year award for both the area and the mountain region from the N.C. Department of Ag and Consumer Services. The family placed second overall in this year’s competition, finishing behind a farm from the eastern region.

“It’s an honor,” Libby said. “We try to take steps to keep the soil healthy and the environment healthy because our next generation is hoping to start doing it and you have to take care of it for them.” 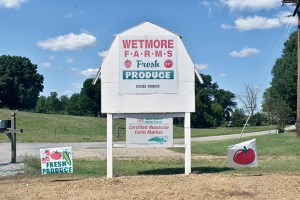 Founded over 100 years ago, Wetmore Farms is one of the state’s century farms. A variety of crops, produce and livestock have been raised at the roughly 450-acre farm. The farm currently grows vegetables ranging from tomatoes to squash and raises beef cattle, in addition to growing soybeans and corn. Ben Stansell/Salisbury Post

This is actually the second time the farm has received the award. Libby’s grandfather, father, uncle and Artie were recipients of the same honor in 1984. However, the family’s conservation efforts started decades before then.

“Libby’s grandfather was one of the first to do no-till with corn,” Artie said. “They were one of the leaders in conservation back in the ’30s and ’40s.”

While the family’s first endeavor into no-till practices didn’t initially pan out. They tried again a few years later after more effective herbicides were available.

“They didn’t quit, they didn’t give up,” Artie said. “That’s what farming is.”

Over time, the family added more conservation practices to the mix. To prevent soil erosion, the family has implemented terraces, installed waterways through fields and borders around them and continues practicing no-till or conservation tillage, as well as crop rotation.

“That’s our livelihood, that soil,” Artie said. “If we don’t have that, we don’t farm.”

To conserve water, the Watsons use drip irrigation to direct water and nutrients right to the plants, with limited waste. They also use a watering system for their beef cattle, instead of letting them roam free and drink from nearby creeks. 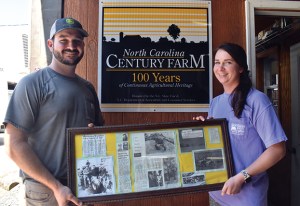 Jacob and Laura Watson hold up framed articles written about their family’s conservation efforts at Wetmore Farms. The siblings are the sixth generation to farm the property in Woodleaf. Ben Stansell/Salisbury Post

The conservation efforts at Wetmore Farms will continue with the sixth generation — siblings Jacob and Laura Watson. The brother and sister duo are already working on the farm.

From the time that he was a child, Jacob always planned on inheriting the agricultural legacy of his family.

“It’s all I’ve ever done,” Jacob said. “I never had another job outside of working here.”

Nor has he wanted one.

When he wasn’t riding the tractor with his father, young Jacob was playing with farm-themed toys on his bedroom floor. He went through a two-year agricultural program at North Carolina State and now helps Artie run the field side of the farm.

Like his father, Jacob has a deep respect for conservation.

Unlike her brother, Laura wasn’t always sold on settling down at the farm. She actually was on track for a career in dental hygiene, but decided to go back to school to get a degree in agriculture business management. She now focuses on the market side of the operation, where the farm sells its fresh produce and meat.

The Watsons will receive the district award at a banquet to be held later this fall and will be given the state award at a banquet early next year. Although it will be nice to add some hardware to the farm’s collection, the family isn’t overly focused on the awards.

“The stuff we’re doing that they look at, regardless of an award, is something you’ve got to do,” Jacob said. “It is good that somebody recognizes you for it.”

Wetmore Farms is located at 175 Farm Dr. in Woodleaf and can be reached by calling 704-278-2028. Wetmore Farms’ produce and beef can be found at the on-farm market or at a number of local, independently owned markets such as Father and Son Produce in Salisbury and Farm Fresh in Kannapolis.

More valuable than ever during pandemic, RSS celebrates its…