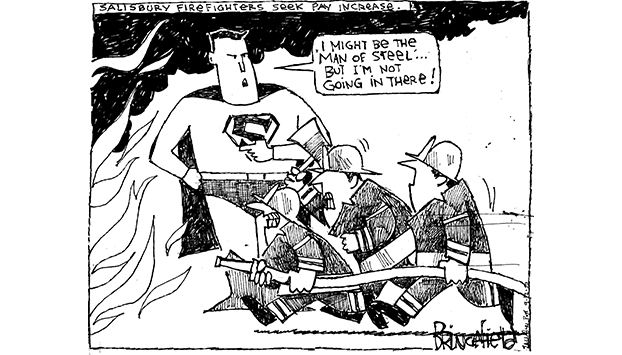 Whether pay raises happen for firefighters “isn’t a question about if,” says Fire Chief Bob Parnell.

“This one will get fixed,” Parnell said in a phone interview last week.

He’s not content with waiting until the 2022-2023 budget, which won’t be considered by the Salisbury City Council until the spring. It wouldn’t go into effect until July 1.

“I need it done faster than the next budget,” he said.

He and City Manager Lane Bailey are on the same page. City government will have an up-to-date pay study for all of its employees after a new council is elected, but Bailey says he’s asked for data specifically about firefighters to be ready in October. That means the same council that voted against hearing a presentation about firefighter pay will consider data to solve the problem a few meetings from now.

“They’ll give us some partial numbers. This is something you can do as a stop-gap measure,” Bailey said.

The Salisbury Fire Department’s base salary is $31,042.

Parnell said several entry-level firefighters are near that number. The goal, he says, is to move firefighters through obtaining certifications and advanced credentials, which come with pay increases. Salisbury firefighters also receive pay bumps with college degrees and an ability to speak Spanish.

The department’s recruitment information online says the total compensation for entry-level firefighters is $45,706. That includes a 401(k) contribution, health insurance and pension. Excluding a pension, none of those things are rare for public or private employees, but Parnell and Bailey recognize that changes are needed. Both believe studies will find Salisbury’s pay is at or below the average for similarly sized cities.

People also may compare firefighters to police officers, who just received a significant pay boost without a full-fledged study. That’s fair. While firefighters and police officers perform fundamentally and constantly evolving functions, it’s hard to argue one should be paid 70% of the other. (The Salisbury Police Department offers a base salary of $41,915.) Both regularly put their lives at risk to keep the community safe.

It’s also fair that Salisbury City Council members want raises to follow a chain of command, but it’s important to clean up a few comments they made before the 4-1 vote.

Critically, there’s not just one, two or three disgruntled employees who want a raise. The item on Tuesday’s agenda was a presentation from the Professional Firefighters of Salisbury, a union. Because of rules surrounding collective bargaining in North Carolina, it’s not a union in the same sense as UAW Local 3520, which represents Daimler Trucks employees in Cleveland. Still, it’s a union with members who work for the Salisbury Fire Department.

“They speak with a voice and I welcome that,” Parnell said.

Last week’s meeting also included an implication that firefighter concerns have been ignored. While Salisbury’s government tends to move at the pace of City Council meetings, it doesn’t appear Parnell or Bailey are ignoring concerns, particularly if they hope to have data next month for a short-term solution. Maybe they’ve moved more slowly than firefighters or elected officials like. Recent developments may have spurred action. But it’s not fair to say the fire chief or manager are ignoring concerns.

On the most fundamental point, council members are likely to find they agree with each other — they’re all interested in making sure Salisbury firefighters are paid fairly. If they can focus on that, the discussion about firefighter pay will unite, not divide, them.