For author Woodson Harvey, back-to-school shopping and getting back to basics are things to savor 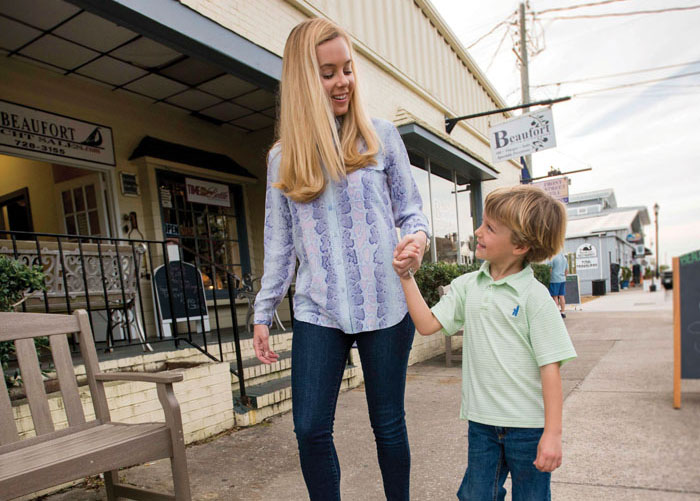 JON C. LAKEY / SALISBURY THE MAGAZINE Kristy Woodson Harvey and her son, Will, in 2017.

Back-to-school shopping was practically a holiday in my childhood home. My mom and I waited for the hallowed supply list to come in the mail and spent hours perusing the aisles of our office supply store searching for the perfect Lisa Frank folders and kitten binders, choosing between the pink pencil box and the purple one.

The first time a Labor Day passed, school began, and I wasn’t going back to it, I was 23 years old and working in finance despite my degree in journalism and master’s in literature.

As students went back to school that year, and I wasn’t among them, it hit me how far I had strayed from that initial vision of the woman I would become. At 17, after my inaugural “Garden Games” piece was published in the Salisbury Post, I had once believed I would tell real people’s stories, that I would change the world with my words. Somehow, though, I had found myself on a different path.

So it was on that day, unsettled because I knew I wasn’t where I was meant to be, that I went home and told my husband something I had been thinking about for a while. In our cozy, historic living room in our first house together, I said, “I’m thinking about going back to UNC to get my PhD.”

My husband put down his iPad, looking amused. “Is that what you really want to do?”

He knew I was toying with the idea of writing a novel — and avoiding it so hard I was considering devoting the next five years to something else. When I didn’t answer, he said, “Someone has to get published. It might as well be you.”

I kept telling myself I wasn’t good enough to compete. I wasn’t talented enough. And, come on, wasn’t writing a novel a little cliché, something that anyone in the throes of a quarter-life crisis would do? More than anything, I think I was afraid of the failure that would inevitably come.

Still, that night, urged on by my husband’s words and his amused certainty that I could do the things I was so scared of, I started writing my first manuscript. It wasn’t something I would ever share with the world, but it was a leap of faith, a signal that I would plunge into an unknown universe and take what was handed to me.

I’d like to say that I had such an unshakable confidence in my life path that I believed in the seemingly impossible. I didn’t. But my husband did. At the time that was something. It was everything.

Three years later, I was blogging and freelance writing full-time, unconvinced that any of the manuscripts I had completed on my off hours were “the one.” And I knew what “the one” felt like because I had just given birth to the most beautiful, bald, blue-eyed baby boy. I was somewhat prepared for how fully I would love him, for how everything in my life up until that point would seem wholly insignificant by comparison. But I wasn’t prepared in the least for how much he would love me. How he would know me, how I seemed to be all he needed in the world.

The night we took him home from the hospital I got an idea for a book that seemed too painful, too scary and yet, somehow, inevitable. How could a mother part with her child? I asked myself. What would have to happen in her life to make her feel like giving up her baby was her only choice?

It was the question that finally shook me out of my fear of failure. Just like my husband’s clear-eyed love had reminded me that it was OK to pursue my dream, the fierce love I felt for my newborn son gave birth to a whole new journey.

Later that night, up for a feeding, I began writing that woman’s story. Three years later, her story would end up becoming my debut novel, “Dear Carolina.” My husband was right, and it showed me that those impossible dreams aren’t impossible at all. You only have to find the courage to chase them. And, if you can’t, you can borrow the courage from someone else, like I did. Even if you don’t hit your mark, the joy in the journey will likely lead somewhere wonderful.

Only six years have passed since Dear Carolina was released, only nine since that baby came home from the hospital with us. And yet, everything has changed. My eighth and ninth novels will come out in the next six months, and that baby just started fourth grade.

The start of the school year is a happy, sad time like so many are, one where I’m proud of the person my son is becoming yet mourning that, already, the baby he once was is lost to me. But I’ve learned an important lesson. Time passes quickly, so we must savor the small things — like that awe-inspiring rite of passage that I once took with my own mother: buying school supplies.

My son and I spent well over an hour last week perusing the aisles of Staples looking for the exact trappings that would make this year a smashing success. And, of course, we had to throw in a few little boy necessities. An LED flashlight. A tiny screwdriver.

When we got home, he took each No. 2 yellow pencil and sharpened it to a perfect point in his electric sharpener. He has exacting standards, something I know already will serve him well in his little life.

When he was finished, he handed each one to me, and I gathered them like a bouquet, inhaling the scent of wood, paint, and graphite that, to me, is just as intoxicating as any rose has ever been. Like flowers, these pencils were a sign of rebirth, a symbol of something new, an indication of wonderful things to come.

As my son arranged his school supplies in his backpack just so, I took a moment to savor this, our family holiday. Whether we’re going back to school or not, this time of year — as with any time, really — can always be a fresh start.

I took one of those pencils out of my son’s pile and opened the first page of the extra notebook we got for me. As my pencil, still warm from the sharpener, flew across the page, I, like my son, began something new.