Ask Us: If a tree falls from strip between sidewalk, street, who’s responsible? 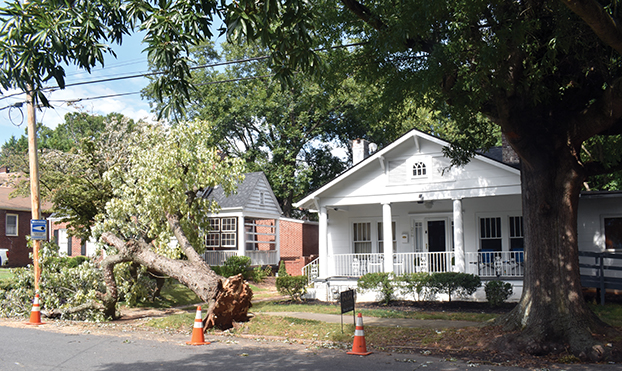 After being clipped by a furniture delivery truck, a large tree toppled to the ground along West Marsh Street. Although the tree did not injure anyone or cause major property damage, it did cause homeowner Richard Spriggs to wonder who was responsible for the cleanup of the tree and the general care for trees on the strip of vegetation between the street and sidewalk. Ben Stansell/Salisbury Post

SALISBURY — After a tree in the strip of vegetation between the sidewalk and the street came tumbling across his driveway and into his neighbor’s yard, a local homeowner was left wondering who is responsible for the cleanup.

Richard Spriggs was in his home on West Marsh Street on the afternoon of Sept. 3 when he heard a loud commotion from outside.

He emerged from his front door to find that one of two large trees outside of his home had crashed down. Although the tree did not damage his car or home and landed shy of his neighbor’s house, the experience left Spriggs slightly shaken.

“I was traumatized because it could’ve fallen into my house and could’ve hurt somebody or killed somebody,” Spriggs said.

The tree had been hit by a furniture delivery truck that was parking on the street outside of Spriggs’ home. Spriggs said the truck only clipped one branch on the tree, but the impact still caused the entire trunk to fall over, catching a few power lines in the process. The tree, Spriggs said, “did not look well” before the incident occurred.

Spriggs dialed the city of Salisbury, and crews from the Public Works Department were quick to respond. Once they arrived on the scene, however, they had to wait for the energy company to cut the sagging lines.

The city was eventually able to cut back the branches that’d fallen into West Marsh Street, but did not remove the main trunk of the toppled tree stretched across the vegetation strip or the portion in his neighbor’s yard. Spriggs said he was initially confused as to why the city didn’t remove the entire tree because he believed the strip of vegetation was under the city’s purview.

While the city does maintain the street itself and the sidewalk in front of Spriggs’ home, it does not have responsibility for the strip of vegetation between the street and sidewalk where the fallen tree once stood.

Powers said the city will “help as much as we can” when a tree falls near public property, but typically does not remove the tree if it falls onto a private lawn.

“We don’t go back into people’s yards if a tree falls,” Powers said. “We use that policy the same way that other towns do. It keeps it clean as far as who is responsible for the cleanup.”

City workers have since removed the portion of the tree that is blocking the sidewalk. 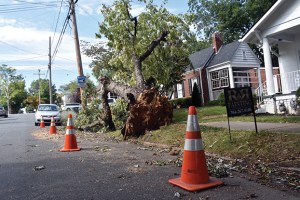 While the city of Salisbury maintains public streets and sidewalks, it typically does not remove fallen trees from private property, unless they pose a major public safety risk. The city will investigate the health of large trees near public sidewalks and streets to ensure that they do not pose a danger. Ben Stansell/Salisbury Post

In case a homeowner such as Spriggs has concerns about the health of a tree that is located near a public sidewalk or road, Powers encourages them to contact the city of Salisbury’s Public Works Department. The city employs a licensed arborist and has several other staff members who are knowledgeable about tree health and can visit a property to take a look.

“We look for signs of disease and they’re trained to look for those things to try to make the most informed decisions,” Powers said. “We make decisions on trees that may be a public hazard and we do help folks out in the historic district because of the regulations in the historic district. If there’s a concern, give us a call and we’ll try to help you out as much as we can. If not, we might can point folks in the right direction.”

The department, Powers said, will always take action on a tree near a city street or sidewalk that poses an imminent threat to public safety.

The Public Works Department can be reached by calling 704-638-5260 or online at salisburync.gov/Government/Public-Works.

The city, Powers said, is keen on keeping Salisbury’s tree canopy intact while promoting its growth.

“We love our trees and want more trees,” Powers said. “The maintenance with them and keeping that going can be a challenge at times, especially when we have summer storms.”

Although the city will not remove all of the tree, Spriggs said the furniture company whose delivery truck struck the tree is investigating the possibility of removing what remains. With a plan for the tree in place, Spriggs said his next concern is with the area of his driveway where the tree fell that is constantly inundated with water when it rains.