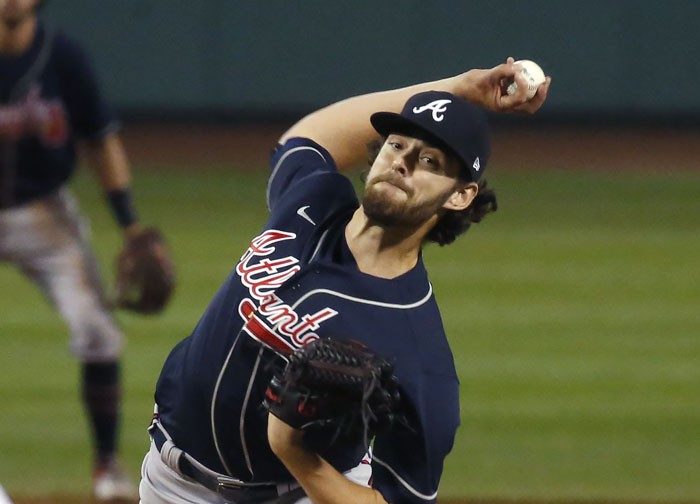 ATLANTA (AP) — Jorge Soler had a two-run single during a five-run fifth inning, Ian Anderson tied a career high with nine strikeouts and the Atlanta Braves beat the Miami Marlins 6-2 on Friday night.

The comeback victory was the Braves’ 35th this season and their second in two nights. They began the game two off the NL lead of San Francisco and Cincinnati.

Atlanta, which has won four of five following a 3-8 stretch, padded its lead to 4 1/2 games over Philadelphia in the NL East. Miami, 16 1/2 games back in the division standings, had won four of six.
Marlins starter Trevor Rogers allowed a two-out double to Freddie Freeman in the first before retiring his next 11 batters. Travis d’Arnaud got the next hit, a double into right field with one out in the fifth, and Rogers walked Orlando Arcia and hit Guillermo Heredia with a pitch. Pinch-hitter Ehire Adrianza followed with a single that chased Rogers and trimmed the lead to 2-1.

One out later, Soler singled past shortstop Miguel Rojas to score Arcia and Heredia. Adrianza scored on the play, too, as center fielder Bryan De La Cruz made a fielding error that gave the Braves a 4-2 lead.

With Soler on second, Freeman hit an infield single that third baseman Isan Diaz fielded and threw errantly to first, scoring Soler to make it 5-2.

The Braves tacked on run for a 6-2 lead in the eighth on Arcia’s RBI single.

Atlanta closer Will Smith faced the minimum in the ninth for his 32nd save in 37 chances.
Rogers (7-7) allowed four runs and three hits with one walk and six strikeouts in 4 1/3 innings. The lefty entered winless with a 6.23 ERA in three career starts against Atlanta. It marked the first time since his last start of 2020 that Rogers, a 23-year-old All-Star, allowed more than three runs to snap his franchise-best, 22-game streak of allowing three runs or fewer.

Jesús Sánchez hit a two-run homer in the first to give the Marlins a 2-0 lead.

Anderson (7-5) scuffled in the third, committing a fielding error that allowed Jazz Chisholm Jr. to reach and then issuing consecutive two-out walks to Sánchez and Jorge Alfaro. He escaped the jam when Lewin Diaz popped up.

Anderson had his strikeout stuff back after failing to punch out a batter in his previous two starts.

Miami got off to a good start in the fourth when Chisholm singled and advanced to third on De La Cruz’s single, but Anderson struck out Sánchez and Alfaro to end the threat.

“We got the two (runs) early, we weren’t able to tack on, and the fifth just got away from us,” Marlins manager Don Mattingly said. “That ended up being the ballgame.”

Anderson, who beat the Marlins for the first time in five career starts, allowed two runs and five hits with two walks in five innings.

The Braves have won six of seven against Miami.

Marlins: 3B Brian Anderson is scheduled to have season-ending surgery next week to repair his left shoulder subluxation. … RHP Pablo López (right rotator cuff strain) will throw 25 pitches in a bullpen session on Saturday. … 1B Jesús Aguilar is rehabbing his knee in Miami.

Braves: Placed C Stephen Vogt on the 10-day injured list with right hip inflammation. Vogt was hurt in Thursday’s win over Washington and had to leave the game. … SS Dansby Swanson got the night off after playing every game the last two seasons.