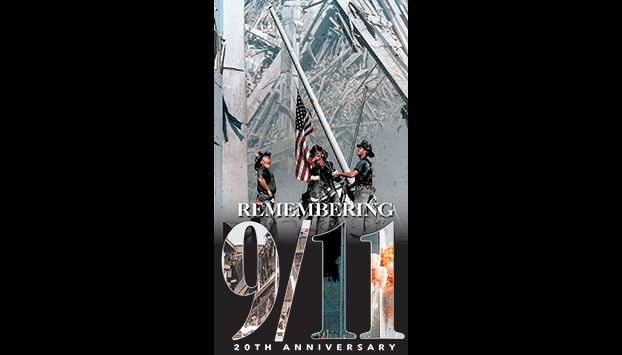 Firefighters raise a flag late in the afternoon on Tuesday, Sept. 11, 2001, in the wreckage of the World Trade Center towers in New York. In the most devastating terrorist onslaught ever waged against the United States, knife-wielding hijackers crashed two airliners into the World Trade Center on Tuesday, toppling its twin 110-story towers. (AP Photo/The Record, Thomas E. Franklin)

Editor’s note: This editorial was first published on Sept. 12, 2001 in the Salisbury Post. We’re republishing it today for the 20th anniversary of the Sept. 11th, 2001 terrorist attacks on the U.S.

For many of us here in Salisbury, the sense of unreality that accompanied the horror of Tuesday’s terrorist attack on our nation was heightened by the seeming normalcy outside our own windows and doors.

While dragon tongues of fire licked at the heart of the nation’s financial and military centers and acrid smoke obscured the sky, a late-summer sun cast its sultry warmth over our flower-bordered lawns and quiet lanes. While ash-covered accountants and CEOs and secretaries staggered ghostlike through Manhattan’s hellish streets, pedestrians strolled along Salisbury’s pleasant byways, going to lunch or to the library, to grocery stores or hair salons.

In cities and towns across America, those same scenes formed the panorama of an ordinary day, even as newscasts spoke of extraordinary death and destruction and evil beyond imagining. Nothing had changed — and everything had changed. Our world was the same — and it was spinning horribly out of control.

We had watched similar scenes of destruction before as our own lives flowed calmly on, but  — except for the aberration of Timothy McVeigh — the devastation had been in Belfast or Beirut or Jerusalem or some other distant place wracked by civil strife or holy war. And perhaps, pondering the violence and vulnerability of life in such places, we had momentarily wondered how those people could go about their daily business in the shadow of such brutal circumstances.

Now, we know — or we are in the process of learning — what people in those places know. They go on because they must go on. To do otherwise is to surrender to the fear and chaos that terrorism strives to create. These attacks were not designed to destroy our country so much as humble and humiliate it, to erode our belief in our institutions and ourselves. As President Bush noted in his speech to the nation Tuesday night, this was an attack on an ideal, on a way of life, on a system of beliefs that shines as “the brightest beacon in the world.”

In response to this extraordinary attempt to dim that beacon, the United States will focus its military and counterintelligence powers on tracking down the extremists who were behind the attack and those who harbored and abetted them. It should be implacable in its determination to find those who orchestrated this murderous attack and bring them to justice. We also should exercise similar resolve in taking whatever security measures are necessary to guard our airports, business and financial centers and government complexes against future acts of terrorism.

Beyond the officials’ response, there’s the outpouring of personal responses. Those were evident in the prayers for healing and peace being raised at churches here and across the nation, in the donors flocking to Red Cross offices to give blood for those injured in the attacks, and in the sense of solidarity and shared purpose that has always brought Americans together when confronted with an outside threat.

The personal response will be evident also on the streets of Salisbury this morning as, God willing, the sun rises again on a world where everything has changed — and nothing has changed. Let us find comfort and hope in its sultry warmth, and in the knowledge that the beliefs we hold dear are stronger than the evil that would destroy it.