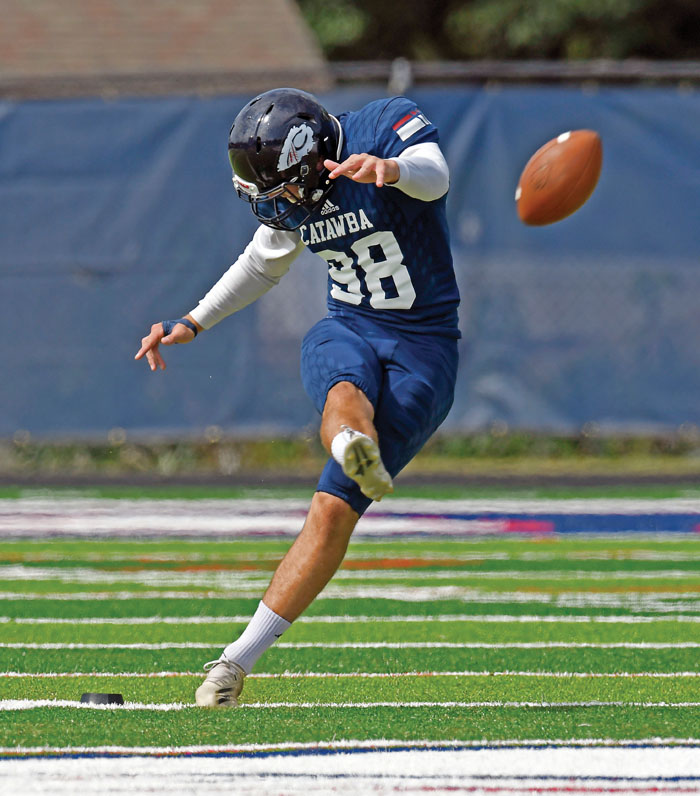 It’s one of two night games on this year’s slate and the only night game scheduled for Kirkland Field at Shuford Stadium.

Catawba is 1-0 for the first time since 2017 after beating Erskine 37-27 in an entertaining opener.

Kicker/punter Clayton Crile was so good that he was the South Atlantic Conference Special Teams Player of the Week.

The other obvious bright spot from opening day was 325 net rushing yards on 7.2 yards per attempt. That means Catawba’s offensive line, which allowed one sack, is the best it’s been in a while. QB Ken Avent and freshman back Jyrea Martin were 100-yard rushers. Avent broke several long ones that were game-changers.

Catawba’s defense allowed 334 passing yards, but it also came up with three turnovers.

Winston-Salem State is one of the flagship schools of the CIAA, a D-II conference that includes Livingstone. The interim head coach of the Rams is Robert Massey, the former North Carolina Central and NFL player who once guided the Livingstone Blue Bears.

Former A.L. Brown defensive lineman Dantrell Barkley, a transfer from Tennessee-Chattanooga, is on the Rams’ roster.

Cameron Davis, a former North Stanly star who transferred from Campbell, is expected to be the primary running back for the Rams.

Dominique Graves, who has started for the Rams, might be the starting quarterback, but WSSU also has Cameron Lewis, a transfer from East Tennessee State.

The CIAA didn’t play last fall or in the spring due to the pandemic and WSSU didn’t get to play this season’s scheduled opener against UNC Pembroke.

So the Rams are 0-0 and still haven’t played a football game in 22 months. Catawba won at Winston-Salem State in 2019 for the Indians’ only victory of that season.

Livingstone lost 13-10 on a field goal in the closing seconds of its opener at home with Clark Atlanta, while the Savannah State Tigers were being crushed 53-7 by fifth-ranked Valdosta, which always seems to have some of the best personnel in Division II.

It was 13-0 game late in the first half, but Valdosta scored 17 points in the final four minutes of the half to turn a decent contest into a rout.

What separates Savannah State from most college squads is that it’s a conservative, run-heavy team. Even though it got behind big, Savannah State had 44 rushing plays last week and threw just six passes. Savannah State relies on controlling the line of scrimmage and running the ball, but could not make that work against Valdosta.

Livingstone’s defense acquitted itself well in the opener and should have a chance to slow down Savannah State’s ground game. Miles Hayes threw a TD pass for Livingstone in the opener.

Savannah State expects to be healthier this week than it was against Valdosta. D’Vonn Gibbons, a veteran QB, was coming off an injury and played some off the bench last week.  Freshman JT Hartage got the start at QB against Valdosta and threw a TD pass for Savannah State’s lone score.

Savannah State’s T.A. Wright Stadium will have a reduced capacity from 8,500 to 6,000 due to COVID-19 protocols. Guests are strongly encouraged to wear masks and to maintain social distance.