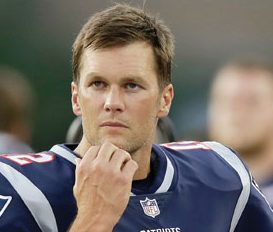 The Panthers should have no problem getting pumped for the game against Tom Brady and Tampa Bay. (AP File Photo/Charles Krupa)

With seats in a NFL stadium filled to full capacity for the first time since the start of the coronavirus pandemic, Ryan Succop won it with a 36-yard field goal with 2 seconds remaining. Brady set it up with a last-minute drive directed on the field where the Bucs became the first team to play and win a Super Bowl in its home stadium seven months ago.

For Brady, a seven-time Super Bowl winner, it was the 300th regular-season start in a sparkling 22-year career — a record for a quarterback. The 44-year-old also joined Drew Brees as the only players to throw for 300-plus yards in a game 100 times.

Chris Godwin, Rob Gronkowski and Antonio Brown caught first-half touchdown passes for the Bucs, who extended their winning streak to nine games dating to last December. Brady’s second TD pass of the night to Gronkowski put the champs up 28-19. Succop’s field goal came after Greg Zuerlein put the Cowboys ahead with a 48-yarder with 1:24 to go.

Dak Prescott threw for 403 yards and three TDs for Dallas in his first game since suffering a severe injury ankle that ended his 2020 season after just five games. The sixth-year pro didn’t play in the preseason after straining his right shoulder early in training camp, and limitations on his throwing weren’t lifted until about two weeks before the opener.