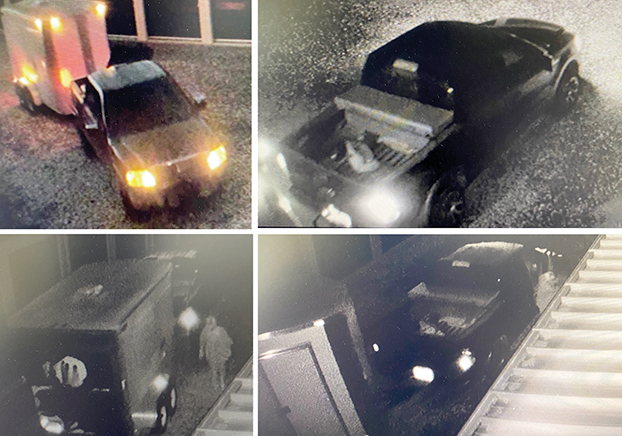 Photos submitted - These images, released by the Rowan County Sheriff’s Office show a vehicle that deputies are looking for in connection with break-ins at the Webb Road Mini Storage.

SALISBURY — The Rowan County Sheriff’s Office is looking for a dark-colored Ford truck with a toolbox in the back after break-ins at storage units on Webb Road.

The incident occurred Wednesday night when an unidentified person used the truck, which was either an extended cab or super cab, and a white trailer to break into multiple units at the Webb Road Mini Storage. Cameras on the property captured the suspect and the vehicle.

• A theft was reported Wednesday in the 400 block of Tree Limb Lane in Kannapolis.

• The front door was taken and removed from a property in the 500 block of Stirewalt Road in China Grove on Wednesday.

• Anne Roland Furniture on Wednesday reported a larceny from the 4000 block of Statesville Boulevard.

• A man on Wednesday reported a larceny from a storage building in the 2400 block of Webb Road that resulted in a $3,455 loss.

• Wauters Motorsports on Wednesday reported a larceny in the 600 block of Performance Road that resulted in a $9,560 loss.

• A woman on Wednesday reported a larceny in the 13100 block of Old Beatty Ford Road in Rockwell resulting in a total loss of $1,000.

• Dustin Allen Knox, 28, was charged Wednesday with being a fugitive from justice.

• A man overdosed Thursday in the 800 block of East Council Street.

• A person overdosed Wednesday in the 900 block of Old Plank Road.

• A woman lost her engagement ring Tuesday in the parking lot of 500 West Jake Alexander Boulevard in Salisbury.

More valuable than ever during pandemic, RSS celebrates its…