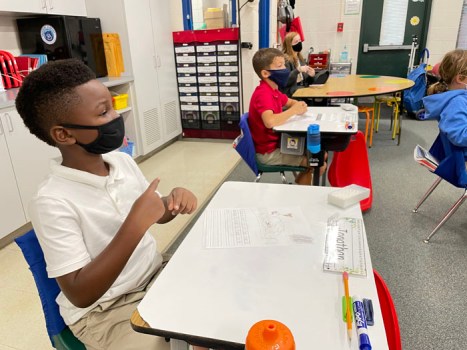 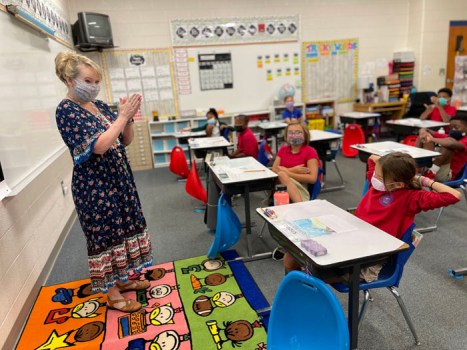 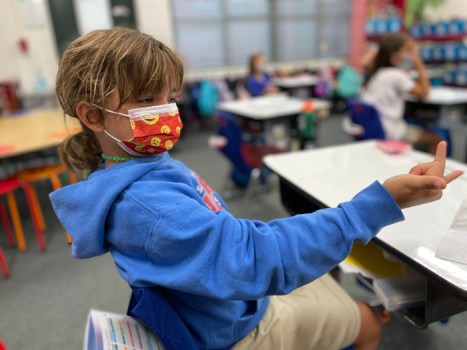 SALISBURY — If you step into a third grade class at Salisbury Academy, you may see silent communication mixed in with all the noise.

The school has integrated American Sign Language into the curriculum for third graders. They use it often for some things such as getting the teacher’s attention or asking to go to the bathroom.

Melanie Deal, who has a dual role as a school counselor and third grade assistant, said a former teacher at the school integrated sign into the curriculum years ago and it stuck around.

“I teach them basic communication and daily language,” Deal said.

In the past when she was a classroom teacher, Deal taught students basic signs that were helpful in class. Deal said sign language has been even more helpful during the pandemic, and the school increased the amount of sign instruction as a result.

Deal said she may speak to a student on one side of the room, look around and see another student sign to her on the other side of the room. She can respond all the way across the room without speaking or leaving the student she is working with.

“As the day progresses, we use basic sign like ‘I need water,’ ‘I need to go to the restroom,'” Deal said.

The students also learn how to spell their names in sign language so they can introduce themselves and the Pledge of Allegiance.

The kids all find it exciting.

“They adore it. They ask for more. They get excited when it’s time to learn more signs. They get excited to share what they’ve learned with their families,” Deal said, adding she hears from parents who are excited about their students learning sign as well.

Lizzy Roy, director of marketing and communication, has a daughter in third grade at the school right now.

“My daughter, Hannah Jean, every night at the dinner table is so proud to share the latest phrase or word that she learned,” Roy said. “You can tell that she feels empowered to have another way to express herself.”

During the previous year, the students heard from two presenters, one of whom was completely deaf and another was an American Sign Language instructor. Deal said she is hoping to do the same this year.

“Something I didn’t know is there is a difference between American Sign Language and sign language that is utilized in other countries,” Deal said.

ASL is not English. There are many sign languages used throughout the world and they use different grammar structures from the native spoken languages of their home countries.

Deal said the grammar can be difficult for students to understand, but they can learn to phrase things similarly to how they would in English.