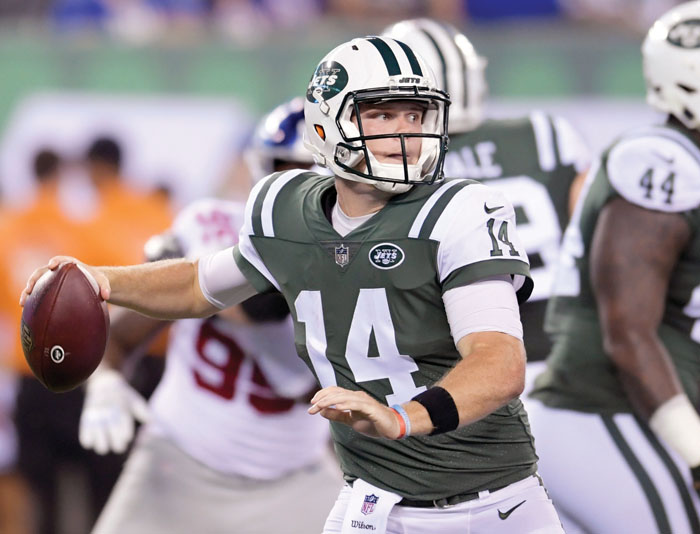 Sam Darnold says, ‘I didn’t do my job to the best of my abilities. That is really all there is to it. ... I wish we would have won more games’ with the New York Jets.(AP File Photo/Bill Kostroun)

CHARLOTTE — Sam Darnold is ready to begin the next chapter of his NFL career, which means putting the past behind him.

After three unsuccessful seasons with the New York Jets in which the 2018 No. 3 overall draft pick went 13-25 as a starter with 45 touchdown passes and 39 interceptions, Darnold has a chance to rebuild his career with the Carolina Panthers.

That begins in earnest on Sunday when Darnold faces his former team in the regular-season opener.

“I didn’t do my job to the best of my abilities,” Darnold said of his tenure with the Jets. “That is really all there is to it. … I wish we would have won more games.”

There’s an overriding feeling from those in the Panthers front office that Darnold will win more games in Carolina — with the right people around him.

He didn’t have much proven talent to work with at the skill positions in New York. His offensive line was suspect, allowing 98 sacks in his 48 starts. And former coach Adam Gase failed to get more production as the Jets finished last in the league in offense in 2020.

Rather, he thinks Darnold has the potential to turn things around in Carolina, similar to what Ryan Tannehill has done with the Tennessee Titans.

That’s why he called Jets general manager Joe Douglas earlier this offseason and asked him what it might take to pry Darnold away.

The Jets, knowing they had the No. 2 pick in the NFL draft and a shot at BYU quarterback Zach Wilson, eventually agreed to send Darnold to Carolina for three draft picks and start over at quarterback.

“I think it is just the offense that they’re in, the players that are around them, the coaching they receive,” Fitterer said when asked why some highly touted QBs have failed in the league. “I think Sam is going to benefit from a reset. He has really good coaching staff around him with (quarterbacks coach) Sean Ryan and (offensive coordinator) Joe Brady. They are just building the basics, they have had to flush what he’s seen and just build from there.”

Things should be a little different for Darnold in Carolina.

The Panthers offensive line remains a major concern, but they have one of the league’s most versatile running backs in Christian McCaffrey, two 1,000-yard receivers from last year in D.J. Moore and Robby Anderson and a promising rookie wideout in Terrace Marshall Jr., who led the NFL in yards receiving during the preseason.

Darnold, for his part, wasn’t willing to compare the two teams.

When asked what is the biggest difference between them, he smiled and replied “it’s a little warmer in Carolina.”

Panthers coach Matt Rhule has gone out of his way not to put too much on Darnold, allowing him time to learn the offense and regain his confidence.

The Panthers have stressed they want Darnold to “get back to the basics,” which includes little things such as footwork, getting in and out of the huddle quickly and working through his progressions.

Or, as Darnold puts it, “just relaxing and playing football.”

Rhule said that Darnold has “come a long way” since his arrival in Carolina and now he just needs to play.

On the surface, the season opener against the Jets would seem to present an opportunity for Darnold to eradicate some demons and prove to his detractors in New York that he was a victim of bad circumstances — and that he can flourish with the right talent around him.

But if Darnold has any underlying thoughts of revenge, he isn’t sharing them publicly.

When a reporter insisted this can’t be just another game for him, Darnold quickly interrupted and said, “But it is.”

For Darnold the season is more about new beginnings, not his past struggles.  “It’s been feeling like I have been opening a new book since I got here, so the start of the season feels like this is opening a new chapter,” Darnold said.