High school football: West at North the headliner for Week 4 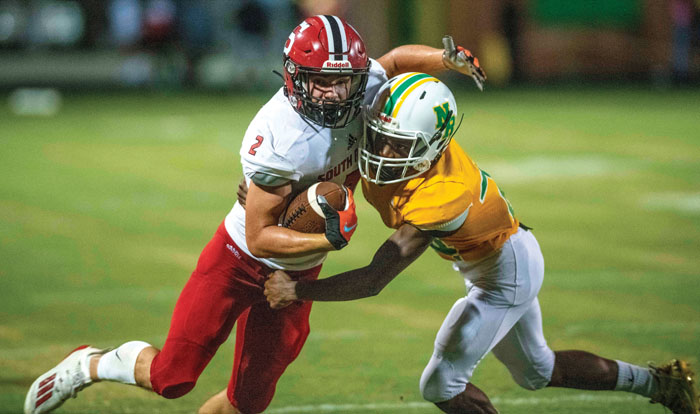 South Rowan’s Bronson Hunt (2) will try to move the ball on Salisbury’s offense this week while North Rowan defenders like Zion Milton will go up against West Rowan. FILE PHOTO BY JON C LAKEY / FOR THE SALISBURY POST. 8/27/21, Spencer,NC.

SALISBURY — Week 4 of this football season is still 100 percent non-conference, but Friday’s games are highlighted by two county matchups.

The intriguing one is West Rowan at North Rowan. Non-conference or not, this is a really important game, especially for West, which is trying to avoid its first 0-3 start since 1996.

West is favored despite being winless. The 3A Falcons have lost to 4As Davie and Mooresville.

1A North Rowan is the underdog despite being at home and despite being 2-0. North has managed to outscore South Rowan and North Stanly with strong offensive performances, but both games were dogfights.

The other county matchup is South Rowan at Salisbury. It will be world-shocking if that one is close.

That’s not knocking South. Salisbury, still unscored on and ranked No. 1 in 2A by MaxPreps, may not have a close one until the playoffs.

Whether Carson is actually good or just average should be clearer after Friday’s game at Robinson, which has played at a high level in the early going.

You can’t get beat any worse than East Rowan was beaten by Salisbury, so the only way for the Mustangs to go this week is up. North Davidson visits Granite Quarry, and the Mustangs might be able to compete.  North Davidson doesn’t appear to be as strong as it’s been in recent seasons.

High-powered Davie will look to go to 3-0 when Mooresville visits. This is a makeup of a game that was postponed in Week 1.

A.L. Brown went 3-0 in non-conference games and will enjoy its open week. Then the Wonders are scheduled for six straight Greater Metro Conference games, most of them tough, before finishing up outside the league with Concord.

All local games this week are scheduled for 7:30 p.m. kickoffs.

North Rowan’s last win against West Rowan was 20 years ago, shortly before West embarked on what is now a legendary county winning streak that lasted more than a decade. The Falcons have won all 10 meetings since then, including a 34-0 beatdown of the Cavaliers in 2019.

North has a chance this time, even with a much thinner squad.

This matchup will feature the county’s two best passing teams.

North has been sharp offensively with Jae’mias Morrow rushing for 291 yards and three touchdowns in two games. Freshman Jeremiah Alford has thrown for 451 yards and five TDs, with about 75 percent of  that yardage being reeled in by McArthur, a 6-foot-3 sprinter who has nine catches for 363 yards and four TDs. McArthur broke school and county records last week with 273 receiving yards.

West struggled to stop Davie and Mooresville, but the Falcons have nice passing numbers.

Noah Loeblein has thrown for 430 yards and five touchdowns. Peter Williams-Simpson has emerged as the go-to receiver, to say the least, with a whopping 13 catches for 279 yards and four TDs.

It’s time for one of the defenses to step forward. The defense that does should win this game.

West’s recent dominance has cut into the Cavaliers’ once huge lead, but North still leads the all-time series 28-25-2.

North beat West in a 1994 playoff game that is still the epic battle in the long-running series.

Salisbury’s defense has shut out both opponents, while South’s offense has totaled less than 100 yards in two of its three games, so it’s going to be challenging for the Raiders to move the ball.

Jamie Klassette has thrown for 240 yards for the Raiders. Landon Richards has rushed 33 times for 111 yards.

They’ll be working against a fast and furious Salisbury defense led by All-America linebacker Jalon Walker.

Salisbury’s offense isn’t quite as scary as the defense and had two freshmen starting on the o-line last week. That’s still the area of concern for the Hornets, although that unit has gotten some experience the last two weeks.

Salisbury’s offense has been operating with so many short fields that sophomore QB Mike Geter doesn’t have huge yards, but he’s already scored six rushing touchdowns. JyMikkah Wells has rushed 22 times for 106 yards and three TDs.

Geter has been efficient through the air, completing 10 of 14 for 171 yards and two scores.

Salisbury forfeited to South after the 2015 season, but the last time the Raiders beat the Hornets on the field was in 2009.

Salisbury won 62-3 when the teams met in the spring.

The Hornets lead 21-7 in the all-time series.

Salisbury is ranked 18th in the state by MaxPreps for all classifications.

2A Robinson already has handled — and manhandled — three 3A South Piedmont Conference teams and takes on a fourth one tonight in Carson.

Carson’s return to a ball-control offense has been successful — 699 rushing yards in two games. Quarterback Hunter Burris has rushed for 251 yards in two games and Carter Dowd has put the ball in the end zone five times. Aiden Kirchbaum and Jordan Galarza have produced 100-yard rushing games.

Carson’s defense was stellar against 1A South Stanly last week, holding the Rowdy Rebel Bulls to under 100 yards of offense, but Robinson QB Blue Monroe will be more difficult for the Cougars to contain.

Robinson leads the series 4-2 and has won the last four. Carson hasn’t beaten the Bulldogs since 2010.

In the 2012 Robinson-Carson game, K.J. Pressley set the Carson record for receiving yards in a game with 241.

East looks to regroup after losing to North Stanly and being hammered by Salisbury.

East has amassed only 160 yards of offense in two games, so it’s been a rough start.

North Davidson was thumped by 4As Reagan and Northwest Guilford to start the season, and wasn’t able to play last week, so it’s also seeking a breakthrough win.

The programs haven’t squared off since 2006 when East took a 7-3 victory.

The teams share a common opponent. Both have beaten West Rowan, although Davie had the easier time of it.

Hard-charging Jawarn Howell carried the load for Mooresville in last week’s 21-13 win against West with 22 carries for 196 yards and three TDs.

Davie is averaging 49 points per game and has an array of offensive weapons. Alex Summers has thrown for 542 yards and six TDs in two games, while Wake Forest commit Tate Carney has seven rushing TDs.

Davie beat Mooresville 31-30 in overtime the last time the programs met in 2019.

MaxPreps ranks the War Eagles 13th in the state.