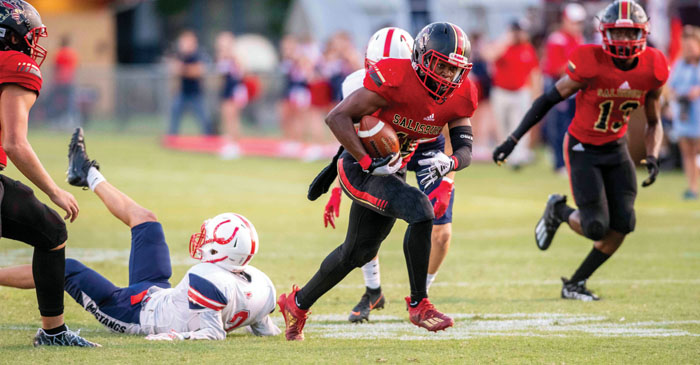 Salisbury’s Zae Neal (10) makes an interception and runs it back for a touchdown in the victory over East Rowan. JON C LAKEY / FOR THE SALISBURY POST. 9/3/21, Salisbury,NC.

SALISBURY — Many teams have goal boards for the defensive unit.

“We don’t have anything fancy like that, don’t even have a board,” Salisbury Hornets head coach Brian Hinson said with a smile. “We’ve just got one goal for our defense every week. Shut them out. If they don’t score, we figure we’ll be all right.”

Since the Hornets turned the corner to reclaiming a role as a 2A powerhouse in 2019 with a state runner-up finish, the Hornets have posted nine official shutouts. They had five in their 16-game season in 2019. They had two blank jobs in 11 outings during their run to the 2AA state title back in the spring.

While opponents managed to score 9.8 points per game against the 2019 Hornets and 10.0 against the 2020 team, it’s very likely that the 2021 Hornets will beat those figures. The regular-season schedule is much less formidable, for one thing, and it’s not like Salisbury’s defense is letting up any. The linebacking corps couldn’t be much better.

“Jaden Gaither had a really heady pick against East Rowan,” Hinson said. “He was behind Jalon Walker and they were both going after the quarterback. So Jaden peels back to cover a guy, and they threw it to him.”

Not only did the Hornets shut out East Rowan 65-0 on Friday (it was 58-0 at the half), the defense accounted for three interceptions, two for touchdowns, plus a safety. East had negative offensive yards in the first half.

“We’d worked all week on recognizing and stopping East on their short, quick passing routes,” Neal said. “I saw that play coming and I came up, picked it off — and took it home.”

It was Neal’s first interception in two seasons with the Hornets. He transferred from East to Salisbury after his sophomore year.

“No one wanted to play great against East more than Zae did and he had a great game,” Hinson said. “Not just the pick-six. He played tough and physical.”

Neal is a Swiss Army knife defender, rugged enough at 5-foot-10, 185 pounds to play close to the line of scrimmage, but fast enough to drop into coverage. He made six tackles in the state championship game in the spring.

Neal and 220-pound Georgia recruit Walker, one of the nation’s top high school linebackers, are versatile enough to take on defensive roles at all three levels of the defense, so the Hornets can show offenses a lot of different looks. They can come at you from a lot of places.

“We can switch positions as needed,” Neal said. “If a team has a really good receiver, we might put Jalon in pass coverage, and I can drop down and play on the defensive line. When you know all your assignments, when everyone is doing their jobs, you can move around like that.”

Neal has played football since was 5. He says his hobby is football. He dreams about football and he wants his future to be in football.

He has the frame to put on more solid pounds, so he has a chance to play at the next level as a safety. Sterling College, an NAIA program in Kansas, already has offered him, although Hinson believes Neal can play at the Division II level. Hinson put in a call to his former Catawba Indian friend Gary Bass on Tuesday to talk about Neal. Bass is the head coach at D-II Quincy University in Illinois.

“In a lot of ways, he’s the glue for our defense,” Hinson said. “He’s the kind of kid you want in your program. He never has a bad thing to say to anybody, and he works hard every single day.”

South Rowan visits Ludwig Stadium on Friday. The goal for Salisbury’s defense won’t be on a fancy board, but everyone knows what it is.