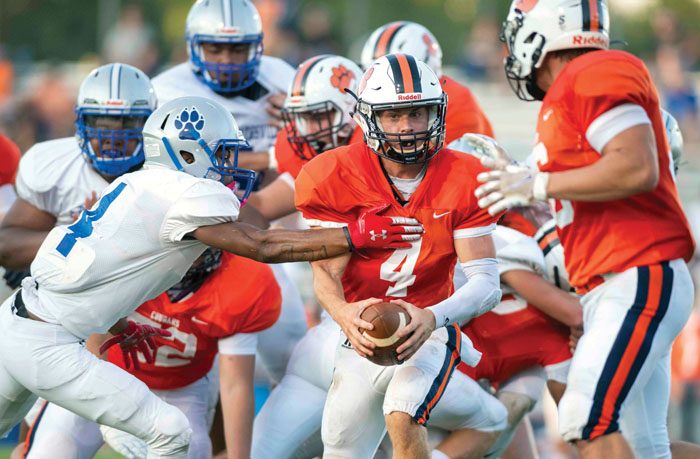 Carson’s quarterback Hunter Burris (4) gets caught in the backfield. . The Carson Cougars fell to visiting Greyhounds of Statesville High School 41-30 in the opening games of the high school football season. . JON C LAKEY / FOR THE SALISBURY POST. 8/20/21, China Grove,NC.

CHINA GROVE — Carson’s football team opened the season by keeping the ball for more than 10 minutes on a lengthy drive and punching in a touchdown against talented Statesville.

That was a message.

In a high school football world that is increasingly about spreading it out and throwing it around, Carson has turned back the clock, making an effort to return to those golden days of 2014 when Brandon Sloop and Darren Isom were cranking out crazy rushing totals.

Third-year head coach Daniel Crosby doesn’t mind when people tell him this looks a lot like what former head coach Joe Pinyan used to do when he was winning big at Salisbury and enjoying reasonable success at Carson, a program that hasn’t made a playoff appearance since 2016 and hasn’t had a winning season since 2015.

“We’re working on our passing game and we need to hit some big plays there,” Crosby said. “But what we’re doing now mostly depends on our quarterback taking the snaps under center and making good reads on the option. We’ve got the right guy to operate this offense in Hunter Burris. He understands it. He’s smart and he’s an athlete.”

The stat sheet backs up Crosby’s statement.  So far, so good, for Carson’s return to a pound-on-the-ground offensive attack. Carson has completed just three of 12 passes in two games, but the Cougars have steamrolled for 699 rushing yards in two games.

“All of our backs have been hitting the holes hard,” Burris said. “Our offensive line has been just awesome. All I’ve got to do is make the right read on the end, and we’ve got a good play.”

Carson’s offensive line has been mix and match due to COVID, but it’s done everything that’s been asked of it and has avoided the killer holding penalties that can crush a 5 yards at a time offense. The tight ends and wideouts have bought into roles that will have them blocking or decoying more than catching.

Carter Dowd (151 rushing yards, 5 touchdowns) has been the punishing workhorse back, while Burris, in just two games, has established himself as a major running threat.

“I wouldn’t say Hunter is super-fast, at least not the sort of top end speed you might measure with a stop watch,” Crosby said. “But he’s very quick side-to-side. He’s agile and he’s fast enough to go all the way if he sees an opening.”

Burris had 11 carries for 63 yards and a touchdown in the opener against Statesville, a 41-30 loss.

He broke loose for 188 rushing yards on just 10 carries as the Cougars demolished South Stanly 40-6 last Friday. That was school-record rushing yardage for a Carson QB.

Burris bounced off a tackler to finish a 24-yard scoring run.

He got loose on a 62-yard scamper when he faked a handoff, pulled the ball out at the last possible instant, didn’t see any linebackers and surged to daylight. Then he easily outran South Stanly’s defensive backs. That probably was the game’s biggest score, as it answered South Stanly’s lone touchdown.

Burris grew up playing quarterback, but he was the fullback in an option offense when he was a freshman. That was Pinyan’s last season.

As a sophomore, he was the backup varsity quarterback, getting reps, but taking the snaps from the shotgun, not under center.

As a junior, Carson backed up senior Alex London at quarterback, but the Cougars also needed Burris at cornerback, and he was a starter on the defensive unit.

As a senior, he’s getting his first chance to lead the offense.

“It’s different taking the snaps under center, but the biggest adjustment I’ve had as a senior is just trying to be more of a leader,” Burris said. “As the quarterback, you’ve got to be a coach on the field and a vocal leader of the offense.”

Burris is old-school in another way. He’s a three-sport athlete who is important to Carson’s athletic program as a baseball second baseman and basketball forward.

“It can be tough playing three sports, but the coaches at Carson have made it easier,” Burris said. “They’ve always helped me work out a schedule.”

Carson didn’t get to play in Week 2 due to COVID quarantines, so the Cougars were excited about getting back on the field last week. The win was gravy.

“Right now, just playing the games is at least half the battle,” Crosby said. “You have to make sure you have enough kids to play safely.”

While Carson football hasn’t been in the headlines for a while, the Cougars may have a chance to contend in a wide-open South Piedmont Conference, where no one has looked scary up to this point.

This week’s non-conference game at Robinson, which stuffed South Rowan last week and has handled three SPC teams, will tell the Cougars a lot about how they’ll stack up the rest of the way. Robinson has one of the best defensive fronts in the area and plenty of team speed, so if the Cougars can move the ball on the Bulldogs, they probably can move it on anyone they’re going to face in the SPC.

“It’s a big challenge for us,” Crosby said. “But we’re ready to go and we’ll see what we can do.”