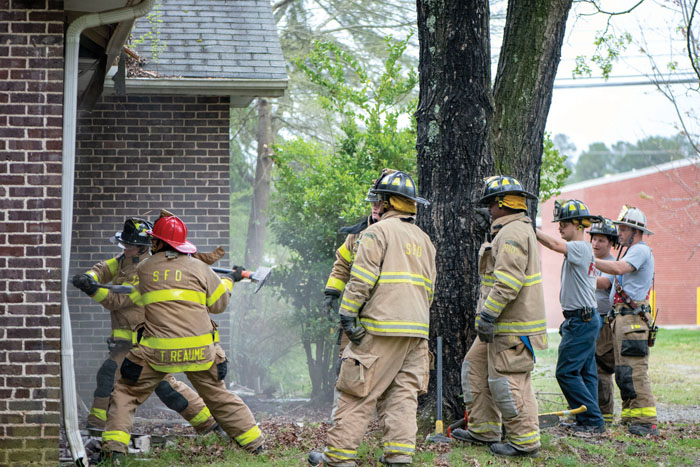 On July 24, city leaders received a letter from Salisbury firefighters that called on officials to raise the level of pay and benefits for fire personnel to remain competitive with surrounding markets. The letter also cited the department’s success in achieving a Class No. 1 ISO rating, which is the highest possible and produces better insurance premiums, as well as emergency response times.

“Unfortunately, lack of compensation and benefits are threatening to undermine the operational integrity of the department while also endangering the well-being of its dedicated employees,” the letter stated. “Even through various levels of promotion, Salisbury Fire Department employees still fall below other comparable departments in the rate of pay. Coupling that with the loss of raises during the 2020 calendar year only intensified the pay discrepancies.”

In a city council meeting on Aug. 3, City Manager Lane Bailey told council members about a 10% vacancy rate across all city departments and discussed moving forward with a salary study. While the city had funds to implement some pay raises in the 2021-22 budget because of a surplus, additional raises would require the city to dip into the general fund or raise the tax rate, posing a problem for future years when money is tighter.

This year’s budget also includes a 2% cost-of-living adjustment increase for all city employees, which will take effect Jan. 1.

Bailey told the Post a contract was signed with The MAPS Group on Aug. 25 in the amount of $40,000 to begin a salary study in November. He estimates it will take around five months to complete. Once complete, the study should paint a more thorough assessment of the necessary salaries for all ranks of the fire department.

An email from Chief Bob Parnell to Salisbury firefighters on Aug. 28 said the study will include comparisons of staffing levels as well as the number of full-time employees compared to various demographics like population and number of calls for service.

“While a salary study isn’t completed quickly, it will be thorough and verified as it will study the salary levels of all ranks,” Parnell said in the email. “It will be a document that is factual and provides a real and total view of where we are and where we should be.”

Also in the email, Parnell detailed the city’s implementation of a 457 plan, which is an IRS-sanctioned employee retirement plan offered by state and local government agencies along with some nonprofit employers. Because of a decision made decades ago, firefighters in Salisbury do not pay into the Social Security program. Those who may have paid the 10 necessary quarters into the Social Security program in addition to their career as a firefighter are often penalized and don’t receive their full benefits thanks to the federal Government Pension Offset and Windfall Elimination Provision.

While the 457 plan provides a greater return on investment than paying into the Social Security program, it still excludes spousal death benefits granted to Social Security recipients. The program is also voluntary.

“I must say at this juncture that I’m glad that Salisbury will be offering a program much like those fire departments that don’t have Social Security benefits such as Durham and Wilmington and others,” Parnell stated in the email.

Fire personnel received a raise in 2018, which included a higher base pay, certification incentives and monthly stipends. In January 2019, the base pay for fire control specialists No. 1 and No. 2 was raised to a little more than $31,000 and nearly $32,600, respectively. Pay for the lieutenant rank rose from almost $38,000 to $45,000. Captains received a nearly $6,000 raise. Human Relations Director Ruth Kennerly said some salaries were adjusted after re-evaluating employees’ rank, years of service and education level. Some overtime pay for certain shifts was also implemented.

The letter sent to city leaders also described frustration about pay increases for police and public works employee without a salary study.

Caleb Renner, president of the Salisbury Professional Firefighters Union, told the Post many fire personnel agree a salary study is the best option to more accurately adjust wages, but a “short-term show of good faith” would be more likely to keep some members around for the eventual findings of the study. In addition to the three employees who have left, Renner said up to 10 more have submitted applications at other departments. Operationally, the department has seven vacancies, he added.

Renner said the 457 plan contribution option is acknowledged and appreciated, but it was discussed before the three recent departures. Additionally, while some feel it’s a great alternative to a Social Security contribution, no percentage or amount of contribution has been discussed and other departments still have more appealing benefits, Renner said. He added that others are less concerned with long-term benefits and instead desire a pay raise in a more immediate sense.

Renner said a high turnover rate has been an issue plaguing the department for a while. As of Wednesday, the average seniority among employees per shift has ranged from four to seven years, meaning the department “is hurting for those senior members who can be mentors,” Renner said.

“Hopefully by bringing awareness to this issue, we can get more voices on our side,” he said. “Members feel that they’ve really proven themselves.”