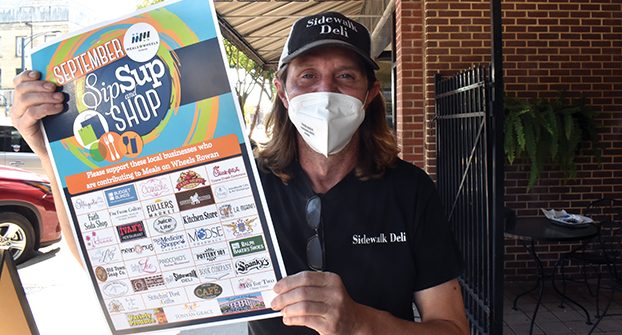 Rick Anderson, owner of Sidewalk Deli, holds up a poster for September Sip, Sup, and Shop. Sidewalk Deli is one of almost 40 Rowan County businesses participating in the monthlong fundraiser, which benefits Meals on Wheels Rowan. Ben Stansell/Salisbury Post

SALISBURY — Throughout September, 37 Rowan County businesses will participate in “Sip, Sup and Shop” to benefit Meals on Wheels Rowan.

Headquartered in Spencer, Meals on Wheels Rowan delivers nutritious meals to seniors and homebound individuals around Rowan County who otherwise might not have access to them.

Last year, when many businesses were limited operationally by the pandemic, Meals on Wheels decided to promote local shops and restaurants throughout September and did not ask for donations in return.

“2020 was a difficult year for businesses and restaurants due to the COVID-19 pandemic restrictions, and we wanted to do our best to support those that contributed to us in the past,” Meals on Wheels Board President Tom Robinson said in a news release.

Although Sip, Sup and Shop is an important fundraiser, its focus is really on strengthening the ties between the not-for-profit organization and the local business community.

“It’s more about connecting with these local shops and businesses and forming a relationship with them so they know what we’re doing and we can also support them so we can draw our supporters to shop with them and go out to eat at their restaurants,” said Alexandra Fisher, fund development and marketing manager for Meals on Wheels. “Then they in turn can give back to Meals on Wheels.”

Sidewalk Deli has been a part of Sip, Sup and Shop since its inception. Rick Anderson, the deli’s owner, said that Meals on Wheels is a cause close to his heart.

“I’ve had several friends whose parents and grandparents have used Meals on Wheels and I have a whole lot of friends who deliver for Meals on Wheels,” Anderson said. “After hearing first hand accounts on both sides, you just can’t help but want to help Meals on Wheels. It’s a life saver and sanity saver for so many people.”

Sidewalk Deli will be donating a percentage of its gross profit from each Thursday in September to Meals on Wheels. Anderson said he was concerned about how much the deli would be able to chip in on its first “Give Back” day, but those doubts were put to rest after he rallied support on social media.

“We were so slow on Wednesday, I was wondering if we were going to do anything for Meals on Wheels and I started to feel really bad,” Anderson said. “I put a post on Instagram and Facebook that morning and Cindy Fink (executive director, Meals on Wheels) tweeted and we actually had a really good day.”

Anderson said most of Sidewalk Deli’s business on Thursday was done via pick up and that his restaurant will have two dedicated pick up parking spots starting Tuesday.

Meals on Wheels is distributing “leave behind” cards to volunteers, board members, staff and other supporters. Each card has a place for the business patron to fill in their name and relationship to Meals on Wheels and they can leave the cards at the business they’ve supported as a tangible way to show the benefit of the program.

Meals on Wheels recently held its August is for AniMEALS pet food fundraiser. Several of the same businesses who are participating in this month’s Sip, Sup, and Shop also served as drop-off places for dog and cat food donations.

The fact that Rowan County-owned businesses support local causes like Meals on Meals is one more reason why shoppers should look local first, said Pam Coffield, the owner of the Stitchin’ Post in downtown Salisbury.

“That’s the thing about shopping local,” Coffield said, “the places that you purchase from online do not support the local community like the shops here do. That’s just what makes us all survive is helping each other.” 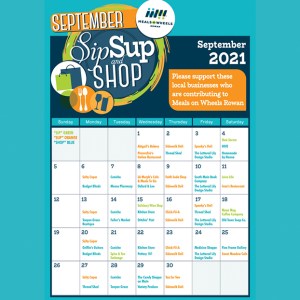 The calendar for Meals on Wheels Rowan’s September Sip, Sup, and Shop fundraiser.

The Sip, Sup, and Shop fundraiser has largely been limited to Salisbury, but this year is adding more businesses from around the county.

“It’s good to see some new people joining us,” Fisher said. “We have a bunch in China Grove. We’ve got Tea for Two, The Candy Shoppe on Main and Old Town Soap that are participating for the first time. The first couple of years we focused on the Salisbury area, but now and in the future we can start to reach all throughout Rowan County.”

Businesses interested in joining the fundraiser can contact Alexandra Fisher at 704-633-0532 or afisher@mowrowan.org. An online calendar denoting “Give Back” days and a full list of participating businesses can be found online at www.mowrowan.org/sipsupshop.