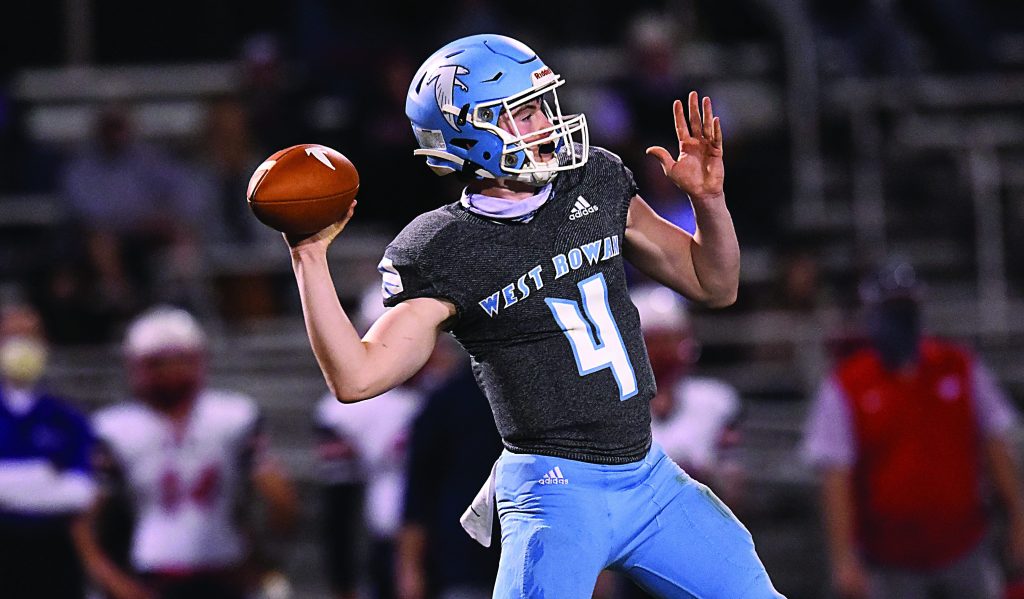 West's QB Noah Loeblein threw for 198 yards but came up just short against Mooresville. File photo by Wayne Hinshaw, for the Salisbury Post

MOUNT ULLA — Joe Nixon made a much-anticipated return to West Rowan on Friday. Too bad he brought the rest of Mooresville’s football team with him.

“No, there was no pressure on me, man,” Nixon said after Mooresville evened its record at 1-1. “It’s about the kids playing ball. West had a good game plan, but we settled in right before halftime. We’ve got plenty of things to improve on, but I’m just so relieved and happy that we got a win tonight.”

Nixon, who coached West for five seasons from 2015-19, spent much of the evening basking in the warm glow of bygone days. He watched as Mooresville overcame an early deficit and handed West its second loss in two outings.

“We knew that Nixon was going to come in here and show us everything,” said West defensive lineman Josh Noble. “They ran the same offense we do. We just tried to put everything on the line and put pressure on the ball.”

West had some early success penetrating Mooresville’s offensive line and thwarted the guest’s opening drive when quarterback Jamere Cherry mishandled a first-and-goal snap. Noble — a 6-foot-4, 290-pound energy drink without the can — pounced on the ensuing fumble on West’s 3-yard line.

“This was a heavyweight matchup, good-against-good in the trenches,” said WR coach Louis Kraft, a one-time assistant under Nixon. “We were playing really hard up front. But so was Mooresville.”

The Falcons drew first blood after taking the opening kickoff. On third-and-10 play, senior quarterback Noah Loeblein spiraled a short sideline pass to junior wideout Peter Williams-Simpson, who turned the play into an 85-yard touchdown sprint down the left sideline.

“We had him on a vert (fly route),” said Loeblein, who completed 12 of 20 attempts for 198 yards and two touchdowns. “I saw (Williams-Simpson) beat his guy off the line, so I put some air under the ball and let it go. I didn’t even see the play because I got hit and was on the ground — remember, they called roughing the passer on that play. They were blitzing more guys than we could block. I didn’t know he caught it until I heard the fans screaming.”

Juan Artega’s extra point gave West a 7-0 lead that stood until the final minute of the first half. Mooresville knotted the score when running back Jawarn Howell (22 carries/196 yards) smashed into the end zone on a 2-yard run with 24.8 seconds on the clock.

“Jawarn is such a great kid,” Nixon said. “We were a little disappointed in our overall team performance last week (a 48-9 loss to Hough). We were glad we were able to get him a big night tonight.”

Howell’s night got bigger in the second half, when Mooresville stitched together the game’s two most important drives. The Blue Devils took the second-half kickoff and promptly fed the ball to its 190-pound junior. On first down he galloped 20 yards to the West 39. One play later he took a handoff, stumbled momentarily in the backfield and jitter-bugged his way into the end zone.

“He was a real hard runner,” said Noble. “Real tough to bring down. We knew if we didn’t tackle him low, he could hurt us. And he did.”

West followed with a 10-play drive that produced four first downs and 40-plus yards of real estate — but no points. Loeblein’s fourth-down pass fell incomplete, giving Mooresville possession on its own 26. On second-and-5, Howell rumbled 69 yards down the left sideline for a 21-7 advantage with 4:57 remaining in the third period.

The Falcons closed the scoring with 2:33 to go. Down by two scores, Loeblein capped a 9-play, 61-yard drive with a 13-yard TD pass to Williams-Simpson.

“He’s just a great leader in the huddle,” said junior right guard Braydon Haglan. “He gets us right, then goes out and makes plays.”

Mooresville melted away the waning moments with four straight handoffs — a 15-yard pickup by Howell and three straight-ahead runs by junior Kyjuan Westmoreland. The Blue Devils celebrated by treating Nixon to a post-game Gatorade bath.

“We got better tonight — the offense and defense,” Loeblein noted. “And we played a lot better than people anticipated.”

Noble went a step further. “We’re 0-2 but we’re gonna bounce back,” he insisted. “What these first two games taught us is that if we play together as a team, we could be unstoppable.”

NOTES: Williams-Simpson turned in a marquee performance. The 6-2 junior made six receptions for 150 yards and both West touchdowns. He missed most of this year’s spring season with a torn ACL. … The Falcons totaled 257 yards of offense, but managed only 59 on the ground. West’s leading rusher was senior Cayleb Brawley (15 carries/54 yards). … West’s Nigel McManus intercepted a pass in the second quarter. … Both teams face unbeaten teams next Friday. West travels to North Rowan while Mooresville visits Davie County.