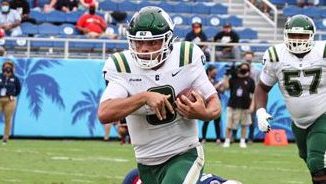 CHARLOTTE (AP) — Chris Reynolds threw for 324 yards with three touchdowns, including an 11-yard scoring strike to Shadrick Byrd with 33 seconds left and Charlotte knocked off Duke 31-28 on Friday night for the school’s first ever win against a Power 5 team.

Victor Tucker had eight catches for 133 yards and Greg DuBose, a transfer from Division II Miles College, caught four passes for 128 yards and two touchdowns for the 49ers, who avenged a 53-19 loss to the Blue Devils last season.

The game featured six lead changes, including three in the fourth quarter.

The 49ers overcame a Duke school-record 255 yards rushing and three touchdowns from running back Mataeo Durant.

Gunnar Holmberg threw for 258 yards and a score in his first career start for Duke but also fumbled inside the Charlotte 5-yard line. Jordan Waters added 105 yards from scrimmage including a 43-yard touchdown reception for the Blue Devils.

Durant gave Duke the lead when he raced off right tackle for a 53-yard touchdown with 1:44 left.
But that was more than enough time for Reynolds, a redshirt senior, who led the 49ers on a seven-play, 75-yard touchdown drive. The winning play came a swing pass to the left flat to Byrd, who escaped one defender to score.

Duke had one last chance to get into field goal range, but a lateral play was thwarted and Charlotte’s fans stormed the field.

Duke: This is a devastating loss for the Blue Devils, who are coming off a tough season last year with only two wins. Duke failed to get much pressure on Reynolds, who was allowed to pick apart the Blue Devils secondary.

Charlotte: The 49ers have found themselves a wide receiver in DuBose, who had just eight catches while playing for Miles College. He had a huge 56-yard touchdown in the first quarter to get the 49ers on the board and another score in the fourth quarter. And Reynolds proved that he’s a winner, repeatedly leading the 49ers back with a refuse-to-lose attitude.