From staff reports
South Rowan’s cross country teams swept the Pre-Rowan County meet held at Dan Nicholas Park on Wednesday.
Girls and boys ran together to beat the rain which came in around 5:30 p.m., as the last runners were finishing.
The course was in excellent shape, and while it was humid, it was not uncomfortably hot.
The Salisbury Rowan Runners timed the race.
In the girls race,  South won a close one with a score of 46 and was followed by Carson (48), East Rowan (51) and West Rowan (71).
Salisbury’s Sutton Webb was the individual winner in 21:32.
Next were Carson’s Camden Corley (22:56), East’s Leah Edwards (23:15), South’s Madison Beaver (23:24) and South’s Bethany Rymer (23:39).
South’s other scorers were Lindsey Beaver (7th), Mackenzie Chabala (16th) and Blythe Elliot (17th).
Katie Roberts led West with an eighth-place finish.
•••
In the boys race, South Rowan boys won with a score of 30 and had three of the top five.
Next were East Rowan (48), West Rowan (68) and Carson (70).
South’s Eli Julian was the individual winner in 16:54. South’s Grayson Cromer (18:24), East’s Thomas Ferguson (18:47), South’s Aaron Jones (19:01) and East’s Shayden Edwards (19:19) rounded out the top five.
South’s  other scorers were Brian Hickman (11th) and Brooks Hubbard (14th).
Ethan Wilson led West with a sixth-place finish. Salisbury’s Jake Denhard was eighth. Connor Price was ninth and led Carson.
The County Championships are set for Oct. 7.
VARSITY FOOTBALL
Davie won’t be playing North Davidson tonight, but has found a replacement game against Lake Norman.
Kickoff is at 7:30 p.m. at Davie.
JAYVEE FOOTBALL
Carson’s jayvee football team won 34-0 at South Stanly on Thursday.
Foday Dyer scored three touchdowns for the Cougars.
Michael Guiton scored a touchdown and a 2-point conversion. Tyler Vitale had a 2-point conversion.
Tristan Clawson had a 70-yard fumble return TD.  Christian Clowney and Andrew Reaves made interceptions. Other defensive standouts were Jackson Earnhardt and Dalton Gay.
•••
Mooresville topped West Rowan 35-0 on Thursday.
•••
Nacier Parker threw a 70-yard TD pass to Jaden Moore for South Rowan in an 18-8 loss to Robinson on Thursday. 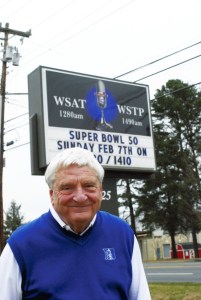 BROADCASTING
Buddy Poole, longtime “Voice of Catawba” on the radio, announced Thursday that this is his last season of play-by-play for Catawba football.
Poole has been the voice on the radio for Catawba for the past 20 years.
BOYS SOCCER
Will Webb scored both goals as Salisbury beat CATA 2-1 on Thursday.
Carlos Henriquez and Luke Graeber had assists.
Salisbury bounced back from their first defeat of the season with a hard-fought win.
The Cougars started off the match on the front foot, hitting the woodwork twice in the opening half, including once on a corner that was very close.
The teams went into the half deadlocked at 0-0.
CATA got on the board early in the second half.
“Despite injuries that saw all three of our center midfielders on the sidelines at one point, SHS refused to wilt and bounced back with Webb’s first goal less than 10 minutes later,” Salisbury coach Matt Parrish said.
With just under 15 minutes remaining, Graeber sent a long free kick into the the vistor’s box and Webb secured the brace and the game-winning goal.
“I’m really proud of the guys on multiple levels,” Parrish said. “We could have hung our heads, but we didn’t. We could have make excuses with players out and we didn’t. Instead, guys showed up and switched roles without complaint and really competed against a very good CATA squad. We were fortunate in many regards as well as CATA hit the frame a total of four times.”
Salisbury got excellent play from David Austin, Leonardo Fragoso and Riley Dillon.
Salisbury improved to 5-1 and now gets four full days of rest before traveling to county rival South Rowan next Tuesday at 6 p.m.
•••
Carson routed Davie County 8-0 on Thursday for its first win of the season.
Davin Garcia scored four goals for the Cougars, who also got goals from Jeffrey Moreno, Gabe Honeycutt, Lisandro Cardona and Brayan Alvarez.
GIRLS TENNIS
Salisbury stayed undefeated with a 9-0 romp against East Davidson on Thursday.
Millie Wymbs, Abby Campion, Abbey Lawson, Kate Burton, Ellison Frick and Emily Frick won in singles for the Hornets (6-0, 4-0 Central Carolina Conference).
Campion/Wymbs, Lawson/Burton and the Fricks were winning doubles teams.
•••
East Rowan got a South Piedmont Conference win by beating Central Cabarrus 9-0 on Thursday.
Audrey Ward, Jaysa Causby, Rebecca Reilly, Addison Barrett, Lauren Whisnant and Lindsey Whisnant won in singles.
Ward/Causby, Reilly/Barrett and the Whisnants were winning doubles teams.
VOLLEYBALL
West Rowan swept Lake Norman Charter in South Piedmont Conference action on Thursday 25-16, 25-19 and 25-13.
In Tuesday’s sweep of Northwest Cabarrus, Emma Clarke had 10 kills and three blocks for the Falcons (8-1, 2-0). Anna Grace Blackledge had four aces. Kenadi Sproul had nine digs.  Noe Gaeta had 21 assists.
South Rowan swept Concord 25-13, 25-20 and 25-15 on Thursday.
Leah Rymer had 22 assists for the Raiders (7-1, 2-0).  Avery Welch had seven kills. Cameron Black had five kills and 12 digs. Payton Black had 23 digs. Kali Nelson had 13 digs.
East Rowan swept Central Cabarrus on Thursday.
East (5-3, 1-1) lost a non-conference match with Central Davidson on Wednesday.
In Tuesday’s loss to Lake Norman Charter, Leah Hinceman had seven kills and three blocks. Anasty Faavesi had six aces and 15 digs. CJ Lytton had eight assists.
WOMEN’S SOCCER

It was the opener for both teams.

Transfer Kelly Havens opening the scoring for the Indians in the 20th-minute. She knocked home a loose ball in the box after a corner kick.

Catawba will travel to King on Saturday for a 4 p.m. match.

A series of events in the final seconds pushed host Catawba to a 2-1 win over Mount Olive in men’s soccer action on Thursday night at the Frock Soccer Complex. It was the opener for both teams.

After a stoppage for an injury with 23 seconds remaining, play resumed with a drop ball about five yards outside the Mount Olive box. As the kick went towards the Trojan goal it found its way into the back of the net for an own goal game-winner with 18 seconds left.

Catawba is back in action at home on Sunday, hosting Barton at 7 p.m.