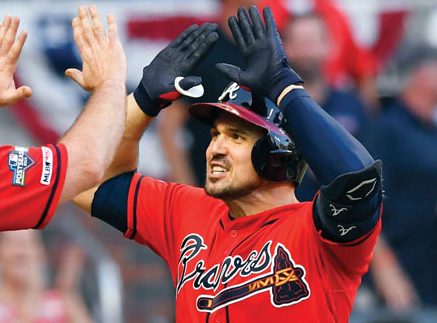 Jorge Soler also homered and Austin Riley had a two-run double for Atlanta, which took the opener of a four-game series after losing three straight to the Los Angeles Dodgers. The Braves also stayed two games ahead of Philadelphia in the NL East.

Five Atlanta relievers combined for six scoreless innings after Touki Toussaint struggled. Jacob Webb (2-2) got six outs for the win, and Will Smith worked the ninth for his 30th save in 34 chances.

Smith surrendered a leadoff single to Ryan McMahon before striking out Elias Díaz and coaxing pinch-hitter Garrett Hampson into a game-ending double play.

The Braves went ahead to stay with three runs in the fifth. Freddie Freeman led off with a double against Yency Almonte (1-3). Freeman advanced on Riley’s single and scored on Dansby Swanson’s sacrifice fly.

Duvall then hit a drive to deep left for his 30th homer, lifting Atlanta to a 6-5 lead.
Soler homered in the first inning off Chi Chi Gonzalez, who started in place of the injured Jon Gray, sidelined by right forearm tightness. Riley’s two-run double in the third gave Atlanta a 3-0 lead.

But the Rockies broke through for five runs in their half of the third against Toussaint. Díaz was hit by a pitch and then was safe at second on Toussaint’s errant throw after gathering in Gonzalez’s fielder’s choice. Connor Joe followed with an RBI single and Brendan Rodgers also singled to load the bases ahead of Blackmon’s fourth career grand slam.

Braves: RHP Chris Martin was placed on the 10-day injured list because of right elbow inflammation. It’s his second stint this season on the IL, having missed 30 games from April 10-May 12 due to right shoulder inflammation. LHP Sean Newcomb was recalled from Triple-A Gwinnett.

Rockies: LHP Kyle Freeland, who left his start Wednesday at Texas in the second inning because of a left hip impingement, was treated with an anti-inflammatory injection on Thursday and was reported to be feeling much better. Barring a setback, he remains on target to make his next start on schedule.

Braves: RHP Huascar Ynoa (4-4, 2.90 ERA) is set to start Friday night. He is looking to get back on the winning track after successive losses.