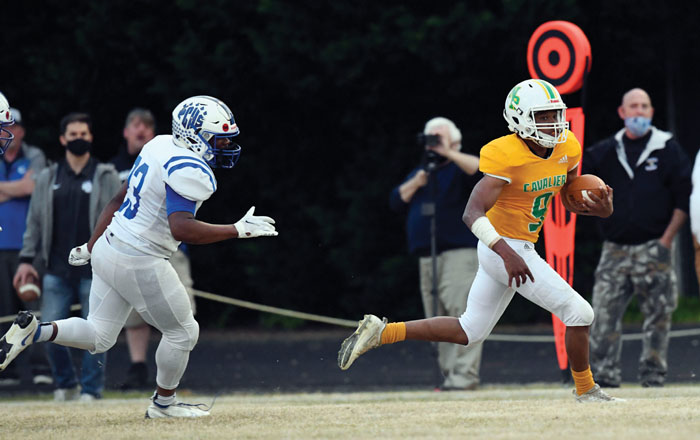 North Rowan's Jae'mias Morrow got his chance to carry the ball when senior Zay Davis missed a game with illness last season. File photo by Wayne Hinshaw, for the Salisbury Post

Rowan football fans may be surprised by that fact, but Morrow, a 5-foot-7, 150-pound bundle of energy, isn’t and North Rowan head coach Nygel Pearson isn’t.

“We just couldn’t get anything going in the first half,” Morrow said. “But we didn’t quit. We kept playing.”

Morrow was a freshman safety back in the spring, but when senior Zay Davis missed the South Davidson game with illness, Morrow got chances to run the ball and made the most of the opportunity. He turned six carries into 112 yards and two touchdowns.

“South Davidson was a coming-out party for him,” Pearson said. “We knew he had speed, but what we realized that night is he’s a different person with the ball in his hands. He’s a really tough kid, fearless. He doesn’t worry at all about getting hit or taking contact. When he’s got the ball, he’s a Tasmanian devil.”

Not long after the breakout against South Davidson, Morrow got 14 carries and put the ball in the end zone three times against Community School of Davidson in the first round of the 1A state playoffs. That’s when Pearson knew North had found its running back of the future.

North graduated standout quarterback Kyree Sims, who is now at Catawba. Morrow, who wore No. 9 during his running heroics late last season asked to switch this season to the No. 2 jersey that Sims had shined in. It was available, so Pearson agreed.

“I really wanted to keep that No. 2 going,” Morrow said.

Morrow’s dream is to be a dual-threat running back who also catches passes.

He had no receptions on Friday, but he did have some key runs.

North has a small team this year, with around 40 varsity players and no jayvee team. The Cavaliers have been lucky so far as far as injuries, but they were missing six players on Friday due to COVID quarantines. The Raiders scored three unanswered touchdowns to go from a 6-0 deficit to a 20-6 lead, and things were looking grim for the home team.

“Those six that were out included a couple of two-way starters, so it was like we were missing eight guys,” Pearson said. “That was part of the reason we started out slow. But give South credit — that’s a good team and they played hard. They already had a game under their belts and you make a big jump from your first game to your second. It was our first one and it was like we were  feeling our way out there We got behind.”

When South’s Bronson Hunt returned the second-half kickoff for a touchdown, South led 28-14.

“Big play for them, but I think that’s when we really got energized, felt that sense of urgency,” Pearson said.

North’s freshman quarterback Jeremiah Alford threw a TD pass late in the third quarter to get the Cavaliers back to 28-20.

With 5:12 left in the game, North finally caught up on Morrow’s 8-yard scoring run and Alford’s 2-point conversion. That sequence eventually led to overtime.

“We’d found something late in the game that we could exploit in South’s defensive alignment, and we kept going to the well over and over,” Pearson said. “We were able to get Morrow outside on them.”

North had the ball first in the overtime period. Morrow got outside again for a 7-yard touchdown. Then he tacked on the 2-point conversion.

“Just getting to the edge and out-running people,” Morrow said.

North’s defense got a stop, and the Cavaliers owned a hard-earned win in their opener.

“We’re a 1A school, so anyone we beat in this county, any 3A team that we can beat, that’s a very good win for us,” Pearson said.

Next for the Cavaliers is a trip to North Stanly, a rugged squad that shut out North Rowan last season. North Stanly is physical  in the running game and has a smart, experienced quarterback who can motor. The Comets handled East Rowan 28-6 last week.

“We’ll get some kids back this Friday, and that will help us,” Pearson said. “I think it’s going to be a tough, one-score game.”